It has always amazed me how broad and diverse the nuclear science and technology field is. It is one of the things that drew me to the nuclear business in the first place. The American Nuclear Society, with its eighteen technical divisions, embraces this diversity from accelerator applications and space nuclear to isotopes and robotics. We are truly a disparate group of engineers and scientists. Based on this, I guess I should not be surprised by the renewed interest we are seeing in uses of nuclear energy beyond the generation of electricity. In recent years, engineers and scientists from all around the world have focused on reducing the impact of electric energy generation on the environment and on finding ways to also reduce the impact of other industrial processes. What I have been seeing—including at COP27—is a renewed interest in nuclear power not only for electric generation but also for its unique capabilities in a diverse set of applications. To name only a few, I have seen strong interest in desalinization, hydrogen generation, process heat, and district heat.

A team of scientists from the United Kingdom’s University of Bristol were given access to the Chernobyl nuclear power plant in Ukraine, advancing a project to train robots and artificial intelligence systems to measure radiation and create 3D maps.

A slideshow of the team’s visit to Chernobyl’s Unit 4 control room and New Safe Confinement structure, where they deployed radiation mapping and scanning sensors, including a LIDAR-equipped robot call Rooster, appears on Gizmodo. 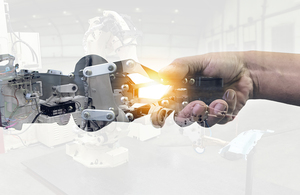 Robotics for Plant Maintenance: Now and in the Future Robotics and remote systems have been used for supporting nuclear facilities since the dawn of the atomic age. Early commercial nuclear plants implemented varying levels of automation and remote operation, such as maintenance activities performed on the reactor pressure vessel and steam generators. Over the past several decades, there has been a steady progression toward incorporating more advanced remote operations into nuclear plants to improve their efficiency and safety. One of the primary forces driving the adoption of robotic tooling in U.S. nuclear power plants is money.

The economic model for the U.S. operating fleet has changed considerably over the past 10 to 12 years. Regulations in the nuclear industry have rarely decreased and, more often than not, have increased. This has led to nuclear plants in certain energy markets being hindered financially and thus needing to find ways to optimize their operations to do more with the resources they have. At the same time, the reliability and flexibility of robotics and automated systems have been increasing while their costs have been decreasing, making robotic systems much safer and more available to use. This has helped drive utilities to explore new ways of using robotics to overcome the obstacles they are facing. One of the obstacles that power plants have been tackling has been shortening the duration of their refueling outages to decrease their costs and increase their revenue.

Though robotics solutions have been used across many industries, for many purposes, Sellafield Ltd has begun to bring robotics to the U.K. nuclear industry to conduct tasks in extreme environments. The Sellafield site, in Cumbria, United Kingdom, contains historic waste storage silos and storage ponds, some of which started operations in the 1950s and contain some of the most hazardous intermediate--level waste in the United Kingdom. There is a pressing need to decommission these aging facilities as soon as possible, as some of them pose significant radiation risk.

The Palo Verde Nuclear Generating Station, a three-unit pressurized water reactor plant operated by Arizona Public Service Company, has started using an inspection technology relatively new to the nuclear industry. The technology, called smart pigs (an acronym for “piping inline gauges”), has previously been employed by oil and gas companies for inspecting and cleaning underground pipes. After testing and analyzing smart pig products from several companies, Palo Verde’s underground piping consultant, Dan Wittas, selected a smart pig suitable for navigating the tight-radius bends in the plant’s spray pond piping. The spray pond system consists of piping, a pump, and a reservoir where hot water (from the Palo Verde plant) is cooled before reuse by pumping it through spray nozzles into the cooler air. Smart pigs work by using the water’s flow through the piping to move an inspection tool within the pipe itself. The technology replaces the previous method of pipe inspection, in which various relatively small sections of piping were unearthed and directly inspected, and were considered to be representative examples of the overall piping condition. In contrast, the smart pigs obtain corrosion levels for the length of piping traveled through and allow a corrosion baseline to be established.

Ratliff and Harris: Innovation for safety and reliability When Floyd Harris began working at Duke Energy’s Brunswick nuclear plant about 24 years ago as a radiation protection technician, robotics and remote monitoring were considered tools for radiation protection and nothing more. Now, teams from across the site, including engineering, maintenance, and operations, rely on the system of robots and cameras Harris is responsible for. “If you want to put those technologies under one umbrella,” says Harris, who now holds the title of nuclear station scientist, “it would be monitoring plant conditions.”

That monitoring is critical to effective plant maintenance. As Plant Manager Jay Ratliff explains, the goal is to “find a problem before it finds us” and ensure safety and reliability. Nuclear News Staff Writer Susan Gallier talked with Ratliff and Harris about how robotics and remote systems are deployed to meet those goals.

At Brunswick, which hosts GE-designed boiling water reactors in Southport, N.C., ingenuity and hard work have produced a novel remote dosimetry turnstile to control access to high-radiation areas, an extensive network to handle data from monitoring cameras, rapid fleetwide access to camera feeds to support collaboration, and new applications for robots and drones.