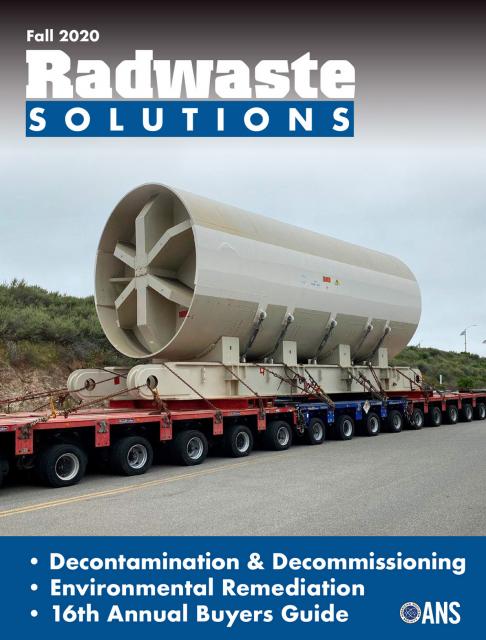 Central Plateau Cleanup Company, the Amentum-led joint venture with Fluor and Atkins, has been cleared by the Department of Energy to begin a 60-day transition, starting on October 5, to the Central Plateau Cleanup Contract at the Hanford Site near Richland, Wash. As announced by Amentum on September 16, the company has received “notice to proceed” on the $10 billion, 10-year cleanup contract from the Department of Energy.

NNSA assists in removal of HEU from Kazakhstan

The last remaining batch of unirradiated high-enriched uranium in Kazakhstan has been eliminated, the U.S. National Nuclear Security Administration has announced.

The action fulfills a pledge made by the United States and Kazakh governments one year ago at the 2019 International Atomic Energy Agency’s General Conference, according to a September 22 NNSA news release.

The collaborative project will recycle heavy water used to cool Canadian pressurized heavy-water reactors such as those in OPG’s Pickering and Darlington nuclear power plants. Once recycled, the heavy water will be used in a growing number of non-nuclear applications that include pharmaceuticals, medical diagnostics, and next-generation electronics including fiber optics.

Experts from the United States and Norway are cooperating to make Norway free of high-enriched uranium, according to a September 21 statement from the U.S. Department of Energy’s National Nuclear Security Administration.