This person will need to have an understanding of the expected levels of radiation and radiation dose rates that might be encountered in these environments. A typical robotics/remote systems engineer will be unfamiliar with nuclear applications, as many engineers come from a very diverse set of backgrounds typically found in the robotics arena; namely, mechanical engineering, electrical engineering, and computer science. To provide a general idea of the radiation environment that might be encountered, we will present a few example applications from past experience.

A primer on radiation units

The first step for an engineer aspiring to apply his/her existing or planned robotic or remote device in a nuclear environment is to have a clear understanding of the basic units associated with common nuclear environments. These units and definitions are the following. (Note that many of these are summarized from references [1] and [2].)

Gray (Gy): SI unit of absorbed dose of ionizing radiation defined as: 1 Gy = 1 J/kg = 1 m2/s2 = 100 rads. Dose in Sv = (Dose in Gy)*( Radiation Weighting Factor), where the radiation weighting factor (WR) is an approximation of the relative biological effectiveness value as a function of linear energy transfer. Therefore, when discussing x-rays and gamma rays (WR = 1) one Gray is one Sievert; whereas, for alpha particles, which have a weighting factor or quality factor of 20, one gray is 20 Sieverts. Absorbed dose can also be "imparted specific energy" and "kerma."

Kerma: Acronym for Kinetic Energy Released in Material. The sum of initial kinetic energy of charged particles released within a material per unit of mass of the material.

Rem (rem): Acronym for Roentgen Equivalent Man. Conventional unit of dose-equivalent radiation: 1 rem = 0.01 Sv. Rem is a unit that is generally used in the United States only.

Roentgen (R): Unit of radiation exposure in the conventional system (non SI) equivalent to 2.58*10-4 C/kg (where C is a Coulomb). One Roentgen unit is equal to the production of one electrostatic unit of charge in one cubic centimeter of air. One R exposure of gamma or x-rays will produce approximately 0.01 Gy (1 rad) in tissue and because gamma and x-rays have radiation weighting factors of one (WR = 1) this is equivalent to 0.01 Sv (10 mSv) dose.

Sievert (Sv): SI unit of dose-equivalent radiation equal to 100 rems. Sv is used in a biological context. Although 1 Sv = 1 J/kg = 1 m2/s2, the Sievert is used to quantify the effects of radiation on biological tissue. Use a gray when discussing dose in any material. Equivalent radiation dose can also be effective dose and committed dose.

X: Unit of radiation exposure in the SI system defined as the production of 1 Coulomb of charge in one kg of air. 1 X = 3,876 R.

Think of these units in this manner:

1) To measure radioactivity: in SI use Becquerel (Bq); in conventional use Curie (Ci).

2) To measure absorbed dose: in SI use Gray (Gy); in conventional use rad.

3) To measure equivalent dose: in SI use Sievert (Sv); in conventional use rem.

4) To measure radiation exposure: in SI use X; in conventional use Roentgen (R).

The first example application examined is from cleanup work performed at the Three Mile Island (TMI) power plant. A remotely driven mobile robot called the Remote Reconnaisance Vehicle (RRV) was designed to carry various tools and a manipulator at TMI [3]. A typical task used the RRV and other remote equipment to leach strontium and cesium contamination from the concrete block wall that surrounded the containment building's elevator and stairwell structures. The task comprised several remote operations, the most complex of which was injecting water into the cavities in the center of the blocks. Injection 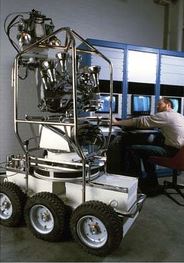 required the boring of water injection holes and inserting a water injection nozzle. Wall sources were in the range of 2 Gy/h to 3 Gy/h (200 to 300 R/h) gamma. Another task was the removal of sludge and contamination from the basement that included cleaning the floor and using a pressure washer to clean walls. General area radiation readings on the RRV used for this task were 4 mSv (400 mrem) gamma and 0.02 Gy beta/h (2 rad beta/h). General area radiation levels on the hydraulic manipulator mounted on the RRV was 6 mSv (600 mrem) gamma and 0.02 Gy beta/h (2 rad beta/h).

A second application area involves robotic and remote systems operating at a reactor site or support facility. For example, a system deployed in a spent fuel pool at a reactor site working on tasks such as inspection and characterization might encounter dose levels in the following ranges. On vertical walls, dose rate is generally less than 1 Gy/h. On the bottom of the pool not directly below the fuel racks, dose rates are below 5 Gy/h. On the bottom of the pool under the storage racks without the fuel rods in place dose rate is less than 50 Gy/h.  Under racks with fuel rods in place the dose rate can exceed 200 Gy/h.

Another area is a dry storage cask. In this case, the radiation levels internal to the cask have been reported up to 100 Gy/h, containing both gamma and neutron radiation. For the pressure vessel annulus of the reactor, levels of 100 Gy/h (gamma) and 300 Gy/h (neutron) have been observed. For the lower and upper intervals of the pressure vessel, values of 0.2 Gy/h (gamma) and 0.07 Gy/h have been observed, respectively. Systems operating in a light water reactor waste disposal facility could see dose rates of 2 Gy/h to 3 Gy/h (200 to 300 R/h) ranging upwards to 300 Gy/h (30,000 R/h). 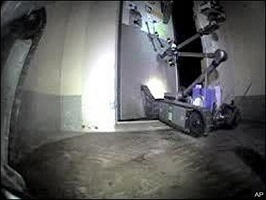 At Fukushima there have been many values published for the possible radiation environment depending upon which reference one examines. One recent publication from Tokyo Electric Power Company stated that radiation levels inside the Fukushima Dai-Ichi reactor have been measured at 30 to 73 Sv/h [4]. Regardless of the reference chosen, these dose rates are well within ranges seen on other applications (e.g. bottom of spent fuel pool at < 5 Gy/h = 100 Sv/h if one is discussing alpha particles in tissue).

During the production of medical isotopes, exposure rates of 0.014 Gy/h (1400 mR/h) immediately following target bombardment to a steady exposure rate of approximately 0.0035 Gy/h (350 mR/h) five to seven days following bombardment have been observed [5]. Consequently, remote target handling equipment needs to be designed to support these exposure rates over the life of the facility, and this is especially challenging whenever increased demand necessitates increased throughout and higher system availability. A typical dose for a food and medical products sterilization facility treating a medical product might be 25 kGy gamma [6&7] and for a food product 4 kGy [7]. Dose rate in an irradiator found in a research facility might range as high as 20 kGy/h. In an industrial irradiation facility (consider one that might contain 3 MCi of cobalt-60), the dose rate might range to 100 kGy/h near the source; however, it is generally around 10 kGy/h [7].

Other applications and dose ranges are: medical diagnosis 10-100 mGy, medical therapy 1-10 Gy, industrial food and agriculture processing 0.1-10 kGy, industrial sterilization 10-30 Gy, and industrial materials modification 50-100 Gy [7]. Systems designed to handle these products are expected to work for a long period with high reliability, but depending upon the design and use requirements, these systems may be able to be located in a shielded area whenever the highest exposures are present.

The radiation levels and dose rates in these example applications are often sufficiently large to justify the application of robotics and remote operations. They are, however, well within the range of engineering acceptability with regard to design and fielding of viable and reliable systems. With proper selection of components giving attention to radiation resistance, with the design of appropriate shielding either by employing direct shielding or by using indirect shielding of critical components provided by other, more radiation-resistant components, and by providing adequate maintenance with planned replacement of degraded parts, the remote systems engineer can field remotely operated devices that can accomplish the required tasks with appropriate reliability in these and similar nuclear environments.

The mission of the Robotics and Remote Systems Division of the American Nuclear Society is to promote the development and application of robotic and remote systems for hazardous environments for the purpose of reducing hazardous exposure to individuals, reducing environmental hazards, and reducing the cost of performing work.

Reid Kress, PhD, PE, is senior technical advisor at the Y-12 National Security Complex, and adjunct professor in the Department of Industrial Engineering at the University of Tennessee, Knoxville. He is chair of the American Nuclear Society Robotics and Remote Systems Division.