Your go-to resource for all things nuclear. The Newswire includes content from all ANS publications and communication outlets, as well as daily updates from the worldwide nuclear community. The Nuclear Regulatory Commission last week announced the publication of the 2020–2021 Information Digest, which describes the agency's mission, responsibilities, accomplishments, and activities and provides general information on nuclear-related topics. The digest is published annually and, beginning this year, will be available electronically only on the NRC’s website.

The complete 227-page document or individual sections, including a handy nine-page “NRC at a Glance” section, is available for download. An audiobook of the digest is also available at the site.

The nuclear industry has embraced the risk-informed and performance-based (RIPB) decision-making process over the past two decades. Still, it remains a complex concept to explain in lay terms.

With that in mind, the American Nuclear Society will be kicking off an RIPB awareness social media campaign as part of Nuclear Science Week 2020, which begins today and runs through Friday. The campaign will link decision making to everyday events in a person's life and feature a series of images and seemingly easy questions requiring a choice to be made. For example, ANS asks, “Would you get rid of your car if the radio didn’t work?” or “Would you toss a lamp if the shade was dirty?” The Nuclear Regulatory Commission has accepted for review an application from Dominion Energy to renew for 20 years the previously renewed operating licenses for North Anna-1 and -2, according to a notice published in yesterday’s Federal Register. Dominion submitted the application on August 24.

A version of the 1,899-page subsequent license renewal application without proprietary details is available to the public on the NRC’s website.

It’s time for the United States to demonstrate advanced reactors

After talking about it for decades, the United States is finally ready to take the next step in demonstrating advanced reactor technologies.

We have the bipartisan support from Congress. We have the best innovators in the world. Now it’s time to see what U.S. nuclear companies can really do with the support and resources of the federal government.

The U.S. Department of Energy is all in on new nuclear technologies and we just made our boldest move yet—selecting and supporting two U.S. reactor designs that will be fully operational within the next 7 years.

After evaluating the competitive U.S. reactor design applications that were submitted to our new Advanced Reactor Demonstration Program funding opportunity announcement, TerraPower LLC and X-energy were awarded $160 million in initial funding to test, license, and build their advanced reactors under this aggressive timeframe. Pending future appropriations by Congress, the DOE will invest $3.2 billion over 7 years in these projects that will be matched by the industry teams.

SRR signed an original MOU with DTC in 2019. The new MOU is effective through September 2021. 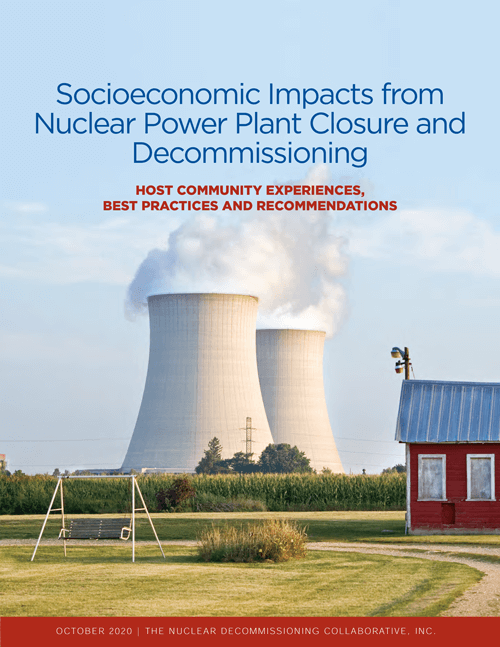 Communities that host nuclear power plants face “swift and severe” economic and social impacts following a plant’s closure, according to a report by the Nuclear Decommissioning Collaborative that was released on October 12. The free, 61-page report, Socioeconomic Impacts from Nuclear Power Plant Closure and Decommissioning, examines the effects of nuclear power plant closures on surrounding host communities, along with the barriers to planning and mitigation, and offers recommendations to nuclear closure communities across the nation.

According to the report, a typical nuclear power plant may operate in a relatively rural area and contribute upward of $400 million annually to the local and regional economics. That loss of revenue can have a severe impact on local public services such as schools and emergency responders. In addition to the economic benefits of operating nuclear power plants, the report points out that plant employees and their families strengthen host communities through their participation in local cultural, civic, and volunteer opportunities.

There is still time to participate in the “Nuclear Power: Let’s Keep it Running” 5K virtual run fundraiser sponsored by the ANS Student Sections Committee. The virtual 5K is designed to raise awareness about safe, clean, and reliable nuclear energy and to enrich the experiences of students in nuclear science and technology.

The campaign has raised more than $2,500 and consists of an online donation platform where student sections can form teams, organize runs, and connect to donors within their communities and throughout the country.

The International Energy Agency released its annual World Energy Outlook on October 13, noting the massive disruption caused by the COVID-19 pandemic and calling for a surge in well-designed energy policies to put the world on track for a resilient energy system that can meet climate goals.

According to the latest IEA analysis of the pandemic’s impact, drops are expected in 2020 in global energy demand by 5 percent, energy-related CO2 emissions by 7 percent, and energy investment by 18 percent. This year’s report focuses on the pivotal period of the next 10 years, exploring four different pathways out of the crisis.

More information on the report is available here. The full publication can be purchased for €120 (about $140). According to the October 9 announcement, Demmer began working with the city of Byron, Ill.-based Wave Marketing to create the website following Exelon’s August decision to prematurely retire both the Byron plant and the Dresden nuclear plant, located in Morris, Ill., absent state legislation to aid the financially troubled facilities. Byron’s two pressurized water reactors are currently slated to cease operation in September of next year, followed in November by Dresden’s two boiling water reactors.

As a not-for-profit scientific and professional organization, the American Nuclear Society’s raison d’être has always been the advancement of nuclear science and technology. While many among our diverse ranks may see themselves as advocates, it is important to recognize that ANS the organization will never take the place of industry trade associations like the Nuclear Energy Institute or the U.S. Nuclear Infrastructure Council. No, we will always be dedicated first to serving the men and women of the nuclear community, both here in the United States and around the world, as a source of news, technical knowledge, professional development opportunities, and scientific fellowship.

This should not in any way dissuade us, however—either individually or as a community—from engaging in the public discussion about nuclear technology, especially when debates become tainted by outright falsehoods or “fake news.” As we have seen in stark relief over the past eight months of pandemic-dominated life, the scientific community has a societal obligation to stand up and set the record straight when misinformation crops up. Simply put, we have to be prepared to call balls and strikes.