The View from Vermont

It's an odd time now, between the old year and the new. A time to look backward and assess, and a time to look forward and plan. That's why the pagan god of January was Janus, who looks forward and backward at the same time. In honor of Janus, I'll do the same.

On January 1, 2010, I started blogging at Yes Vermont Yankee. I was already in the Coalition for Energy Solutions and we were analyzing a report from the Vermont Public Interest Research Group (VPIRG) on replacing the Vermont Yankee nuclear power plant.

But mostly, I was writing long e-mails to my friends and short letters to the editor. It didn't seem like enough.

It wasn't. About two weeks after I started blogging, a tritium leak was found at Vermont Yankee. Opponents were exuberant because "Vermont Yankee had lied about tritium." They saw an inaccurate statement about underground pipes as a big stick, and they used it.

Within a short time, blogging wouldn't seem like enough, either.

The wonderful thing about crisis is that your allies will also come forward. In this case, there were three groups that made further progress possible.

The first is the American Nuclear Society, which started its Vermont Pilot Project, with Howard Shaffer as liaison. ANS has knowledge and members. They shared their knowledge with us, and ANS has provided lists of experts when we need support. ANS has also provided phone coaching on media relations. It's all been low cost and low key, but we have allies now.

The second group was friends who introduced me to John McClaughry of  Ethan Allen Institute, a free-market think tank in Vermont. McClaughry is a well-respected former Vermont state senator. He is also a nuclear engineer. We hit it off immediately, and the Energy Education Project was born. Through this project, we have memberships, raise money for outside speakers on energy issues, and even print a few flyers without dipping into our own personal pockets. It has made a huge difference.

The third group was Areva and its outreach to bloggers. When Areva invited me to see the recycling facilities in France, it was a huge boost to my morale. Not only did I see fuel recycling with my own eyes, but I met fellow pro-nuclear bloggers. We chatted on long train trips and over excellent meals. It was the perfect way to make friends. Once again, I knew I was not alone.

The Energy Education Project of the Ethan Allen Institute and the Vermont Pilot Project of ANS  are changing the dialog about energy in Vermont. We are making support for nuclear energy acceptable!

Some recent and near-term events include:

One of the reasons we have so many events scheduled is that we actually have a volunteer helping to schedule them! This is a real change for the better.

We're bringing in the experts, also. As I mentioned in an earlier post, Gwyneth Cravens, author of Power to Save the World will come to Vermont on January 20. 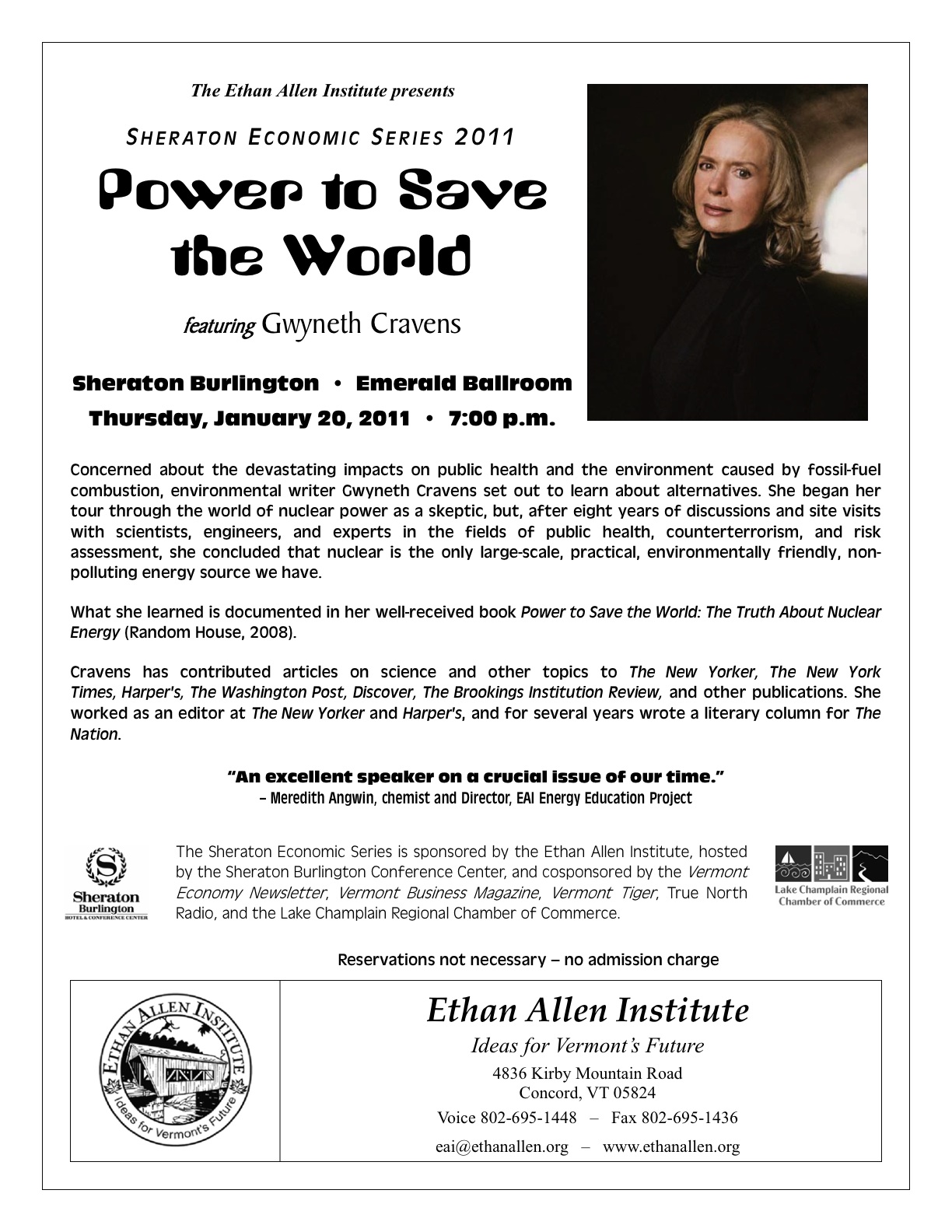 Cravens will speak to a Legislative Round Table at noon, and she will also speak at the Sheraton in Burlington in the evening. At the Round Table, her books will be available to legislators free of charge. The Ethan Allen Institute has arranged significant media coverage for her visit.

In February, we will have Dr. Kathryn McCarthy of Idaho National Laboratory coming to Montpelier and Burlington. She will talk about Gen IV reactors. February 17 is the tentative date.

It's hard to predict the future

There is no doubt that Peter Shumlin is the governor-elect of Vermont. Since he campaigned as "Vermont Yankee's worst enemy" it didn't feel like good news. Two recent blog posts have discussed this issue. Howard Shaffer's blog, Vermont's Nuclear Debate, continued, was named the "Best of the Blogs" by Nuclear Townhall.

We can't predict the future, but we can influence it. Our job is to show everyone, including Shumlin, that nuclear and Vermont Yankee are best for Vermont. I do predict that we will be communicating our message through the ANS Vermont Pilot Project and the Ethan Allen Institute Energy Education Project. We will communicate effectively, with the help of our allies. We will continue to change and influence the debate!

Happy Holidays, and Happy New Year to all!