When Leonard Nimoy wrote his first autobiography, it was titled I Am Not Spock. Nimoy had mixed feelings about the title, but it did entice people to read the book.

Who would want to be Spock, after all? Though Spock is half-human, his character is usually portrayed as close to a computing machine. Spock will not let emotions rule his actions. Spock makes his choices through the use of logic.

When arguing in favor of nuclear power and especially Vermont Yankee, I sometimes felt I was channeling Spock. The opponents appealed to emotion - "I am so afraid." I appealed to facts and common sense. Sometimes I wanted to scream: "Nuclear energy is the ONLY way to keep our civilization without destroying our world!" I never screamed it.

In retrospect, I was Spock.

When Entergy announced that it would close Vermont Yankee, my inner Spock continued.  The opponents celebrated all over the place. They chanted: "Ding Dong the Witch is Dead."  They threw parties.  They wrote op-eds: "On Joy and Justice."  And so forth.

And what about me?  In my blog, I wrote a careful analysis of the causes of the shutdown: "Questions I Frequently Ask Myself about Vermont Yankee's Shutdown."  I tried to understand Entergy's decision and its implications for other nuclear plants.  (Jim Hopf  referenced my post in his excellent post at ANS nuclear cafe.)

I think I was still Spock.

It's been about a month since the announcement and my attitudes have changed.

I am not Spock. I am sad.  I am sad and I cannot rationalize my way out of that feeling.  Everything is not for the best, and this is not the best of all possible worlds.

There has been only one solid human-interest article about the plant closing: Vermont Yankee family faces uncertain future.  When the plant closes, Vermont Yankee employee John Twarog will be laid off.  John expects he will have to leave the area, and his teenage sons will have to complete their high school education in a new town. To me, this was the only article that is real because it was focused on what is actually happening.  Also, I admit.... I know the Twarogs. 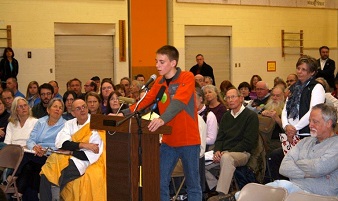 Evan Twarog testifies at Vermont Public Service Board hearing last fall. Cheryl, his mother, is in line behind him.

Of course, lawsuits and opponent meetings and so forth continue, despite the announcement. Howard Shaffer wrote a fine blog post about the current anti-nuclear activism in this area: Our Challenge Continues.  Opponents will attempt to raise the cost of decommissioning in the hopes of giving nuclear energy a black eye.

I don't want nuclear energy to get a black eye, but once the plant is closed and the teams of contractors appear to dismantle it....the decommissioning issues of "how expensive" and "how long" just aren't that interesting to me.  I am interested in operating plants, not cost-savings on decommissioning. 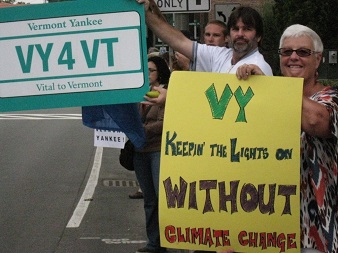 Rallying for Vermont Yankee on the streets of Brattleboro 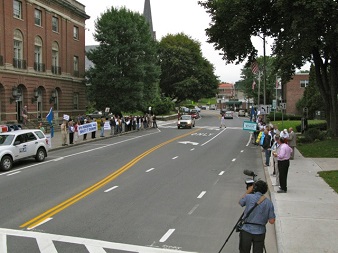 Rallying for Vermont Yankee on the streets of Brattleboro

I am not Spock, and my main emotion right now is sorrow.

My current advice to myself is to stop pretending to be Spock. I find it hard to know how to move forward, which is itself a typical emotion related to the bigger emotion of sorrow.  I am full of self-doubts.  (I know a lot about nuclear energy, why did I decide to concentrate on one power plant?  Wasn't "Yes Vermont Yankee" a silly name for a blog?).  This is also typical of sorrow. 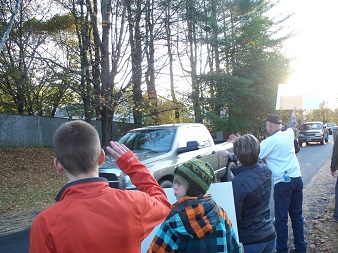 Rallying for Vermont Yankee near the gate to the plant

I guess my only advice to myself is to allow myself to acknowledge this sadness. I know that, given time, a way forward will present itself. In the mean time, I plan to continue my blog.

Why will I keep blogging?  Because some people look to my blog as a bit of "their voice."  These people include employees at Vermont Yankee. I don't want to abandon my readers.  Also, in the course of blogging, I have learned a fair amount about energy choices in New England.  I want to write about that, too.

Blogging at Yes Vermont Yankee may not be a logical use of my time, but I am still going to do it.

I am not Spock.

End Note: My blog post Challenging Those Who Celebrate Vermont Yankee's Closing includes a link to Jack Gamble's eloquent letter in favor of nuclear power Count Me Out of the Party as well as links to some of the nastiest "Joy and Justice" type op-eds.

Meredith Angwin is the founder of Carnot Communications, which helps firms to communicate technical matters.  She specialized in mineral chemistry as a graduate student at the University of Chicago. Later, she became a project manager in the geothermal group at the Electric Power Research Institute (EPRI). Then she moved to nuclear energy, becoming a project manager in the EPRI nuclear division. She is an inventor on several patents.

Angwin formerly served as a commissioner in Hartford Energy Commission, Hartford, Vt.  Angwin is a long-time member of the American Nuclear Society and coordinator of the Energy Education Project. She is a frequent contributor to the ANS Nuclear Cafe.

On August 27, Entergy announced that it plans to close the Vermont Yankee nuclear power plant in the fall of 2014, when the plant's current fuel is depleted. Entergy plans to decommission the...