Our Sierra Club local chapter recently sponsored a joint presentation-by two local anti-nuclear groups. A small audience of attendees heard of the horrors that citizens might expect during Vermont Yankee's upcoming decommissioning. The presenters claimed that their participation in decommissioning will be needed to insure that all goes well because Entergy, and the US Nuclear Regulatory Commission, can't be trusted. Included as usual was a litany of things about to go wrong-all caused by nuclear power!

The partners were Citizens Awareness Network (CAN) leader Deb Katz of Massachusetts, and Citizens Action Network (also known as CAN) leader Chris Williams of Vermont and the Beyond Nuclear group. Using a new PowerPoint presentation, which anti-nuclear groups will undoubtedly use a lot more in the future, they detailed their fears and plans. They worked in a "tag team" switching back and forth a few times.

(Are the identical group name acronyms coincidental? The local press uses CAN for both, making it seem there is one larger organization.)

Katz has been active for many years in local opposition to the Yankee plant at Rowe, Massachusetts, and Vermont Yankee http://www.nukebusters.org/.

Williams is a life-long anti-nuclear activist, by his own proud admission and his resume, beginning right out of college. He claims as a signal achievement the torpedoing of the proposed Marble Hill nuclear plant in Indiana. While retired in Vermont, he has been organizing and leading opposition to Vermont Yankee too http://www.beyondnuclear.org/relicensing/2012/10/3/background-on-chris-williams-presenting-on-entergy-nuclear-r.html.

Their message-and what really happened

"We won" was Deb Katz's opening line, referring to Entergy's decision to shut down and decommission the Vermont Yankee plant by the end of the fuel cycle this year.

However, the "we" really didn't do much winning. The Vermont Yankee plant has a 20-year license extension from the NRC, but projected an unprofitable future competing in the New England energy market against (currently) low natural gas prices. Entergy decided to plan to shutter the plant on its own... although it is possible that there was some political pressure on Vermont's two energy utilities to not sign long-term contracts with the plant.

The presentation then went on to include the following messages (followed by my own analysis):

"We gave up on the NRC and targeted companies' finances to make it hard for them to do business."

True. Nuclear energy opponents have used every available means to run up costs. One of the latest was getting the Red Cross to claim that they needed to shelter an absurdly large number of people for an extended period, if there ever were an evacuation. The funding is to come from Vermont Yankee-see Vermont Yankee asked to pay $200,000 in 2014.

Connecticut Yankee and Yankee Rowe (Massachusetts) decommissionings had problems and cost overruns. Rate payers are still paying because decommissioning trust funds were exhausted. The Yankee Rowe site has PCB contamination and is a chemical pigsty.

Once again the tactic is to compare nuclear power to perfection. To compare Yankee Rowe's initial cost to the decommissioning cost, without adjusting for 45 years of inflation, is absurd economics-but also a tactic.

Vermont Yankee is the first Merchant Plant to be decommissioned, and if its decommissioning trust fund is exhausted, Vermont taxpayers will be stuck with the bill.

The NRC has stated that it will go back to the original owners, if necessary, to get the necessary funds for decommissioning. Congress intended for those who benefited from operating the plants to pay for decommissioning, not any government.  Meanwhile, a loss of funding for various purposes in the region from the Vermont Yankee plant will be keenly felt-see Millions for education, but not one cent for tribute.

The plant could have a fuel pool fire which would be devastating.

This of course has never happened and remains hypothetical.  At any rate, left out is time available for responders to intervene if such an event were to somehow come to pass.

Many nuclear power plants were bought at "fire sale" prices. The Decommissioning Trust Fund can be claimed as an asset. Executives are selling their stock. All Entergy nuclear plants are in trouble financially (i.e., it's all about making money).

Actually, rather typical business practices are all that has been going on. Taking standard accounting rules and claiming some unique fault of nuclear power is a common tactic.

There needs to be a Citizens Advisory Panel to oversee the decommissioning process. The panel needs training. The Vermont State Nuclear Advisory Panel (VSNAP) should transition to a citizens' panel. This should be in the Vermont budget bill this year.

Vermont (H.885) established the "Vermont Nuclear Decommissioning Citizens Advisory Panel," replacing the Vermont State Nuclear Advisory Panel (which was a forum for anti-nuclear activism). The new panel includes two members appointed by the plant, one Union member from the IBEW who worked at the plant, representatives from towns in the 10-mile emergency planning zone, and state agencies.

This is a dangerous time. We are seeing the death spiral of Utilities. The Koch brothers are trying to stop it.

Why the demise of utilities would be such a good thing is not stated. Utilities, after all, are buying power from renewable sources under state mandates. Claiming dangers from a crisis of desperation sounds like a scare tactic.

What was not said was what terrible thing might happen if what they define as "good" is not done.

Baseload for renewables is not needed. Hydro Quebec is the backup.

Hydro Quebec's vast capacity is then the baseload. Another scare tactic.

Baseload and renewables are coexisting right now. This statement shows a complete lack of knowledge of alternating current power supply realities. A great deal of research and development is ongoing to attempt to develop economical large-scale electric energy storage. If this comes into existence, then renewables plus storage will be part of baseload.

There was no media coverage.

Williams was supportive of a recent agreement between Vermont and Entergy, approved by the Public Service Board and in the Certificate of Public Good, under which the plant is continuing to operate. He said that it gets the job done. Katz was not so happy about the agreement, saying that it didn't go far enough (surprise, surprise).

We can expect more of the same by nuclear energy opponents locally and nationally-including a citizens' panel underway for the San Onofre plant decommissioning.

Williams has been to the Palisades plant area in Michigan and expects to continue to help the opposition there. That plant has a license extension and a long-term contract. 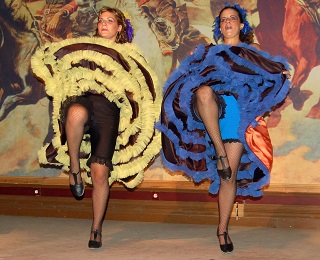