In August, Entergy announced that it would close Vermont Yankee at the end of this fuel cycle. The plant certainly faced challenging economics.

However, I think it is wrong to simply say "economics" caused the decision. One of Vermont Governor Peter Shumlin's major goals was to close Vermont Yankee. Shumlin was always eager to see the end of a major negative presence in Vermont: the presence of the entity he often called "Entergy Louisiana."

"Be careful what you wish for." Considering the amount of money that Vermont Yankee has contributed in payroll and taxes, I suspect Shumlin may now be thinking a bit about that old adage. Along these lines, I recommend Margaret Harding's insightful parable about the Goose That Laid the Golden Egg.

Between the economic and government pressures, Entergy made a decision.  The plant will close, and people will be laid off. People at the plant are fearful of the future. People are angry at the Shumlin administration. But what is next? What lies beyond anger and fear?

The  next step is for plant workers to arrange to live happily. This will not be easy, and it will be harder for some than for others. But plant employees will move on, and they will live well.

The lists come out

About two weeks ago, the planned closing of Vermont Yankee became more painfully immediate to the people at the plant. That was the day the "lists came out." I wrote about this in my blog post Paint It Black.

The "lists" were names of people who would work through the end of fuel transfer operations (approximately January 2015) and the names of others who would be asked to stay longer to estimate decommissioning or to provide security, etc. Most employees at the plant were on the list of people with the shorter time of employment.  The "day the lists came out" was a very sad day, and an event not covered in any local paper. As a friend of mine said:  It was a day swept under the rug and not visible to most people in Vermont.

Although I have never worked there, I identify very closely with the people at Vermont Yankee. As a matter of fact, when I heard recently that Exelon announced that it might close nuclear plants in the Midwest, my reaction had nothing much to do with the fate of the nuclear industry. My initial reaction was basically that this would affect the job search for the people who work at Vermont Yankee.  Let's look at different groups of workers at the plant.

Comments on Facebook and on my blog posts describe the difficult situation of older workers at Vermont Yankee. Some of these people have strong ties to the area, have kids in high school, and live in homes whose value is decreasing as highly paid people leave the area. Everybody at Vermont Yankee is in a difficult situation, but the situation of such older workers is the worst, in my opinion.

Another group with difficulties will be workers who do not have nuclear-specific skills. Many people (administrative staff, for example) could do similar work at many places besides Vermont Yankee. Unfortunately, Windham County is a poor area, and these people will be unlikely to get jobs at a similar pay level to Vermont Yankee. According to census figures, median household income in Windham County is somewhat below the average for Vermont, even with Vermont Yankee in operation ($51K versus $54K). Will these workers stay or move away? Either way, they will face difficult choices.

Many younger workers will have to move away, but will basically be all right. Comments on the Save Vermont Yankee Facebook page show that young people have already begun pulling up stakes. Young people are heading to other power plants in friendlier places.

What has it been like for workers at Vermont Yankee?

King Henry V might describe it: "We few, we happy few, we band of brothers."

That's the upbeat version. The downbeat version is that when people are treated badly because they belong to a certain group (for example, they work at Vermont Yankee), they tend to be loyal to each other. They become a band of brothers and sisters. They have a common enemy. 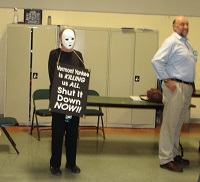 US Nuclear Regulatory Commission public meeting in Brattleboro, May 2012

At Vermont Yankee, the enemy wasn't just the people in the death masks waving signs near the entrance to the plant. It was also the child at the gymnastics class telling another child that her father was a killer for working at the plant. (These Vermont Yankee parents stopped taking this child to gymnastics, and found another sport for her to participate in.) In 2010, I described various incidents in my post Three Views of an Outage, and there are more incidents in the comment section.

In that post, I compared a common attitude in Brattleboro, Vt.,  toward plant workers as almost the same as some attitudes toward African-Americans in the Old South. The idea being that one can say anything bad about "those people," and one can say anything one wants to "those people"... because they don't count. Several plant workers agreed with me on this assessment. 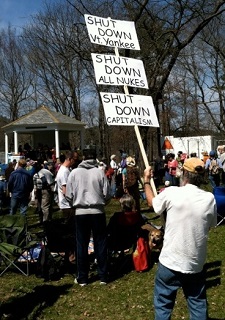 That post about the outage was written in 2010. In 2013, the situation had not changed. When Entergy announced that the plant was closing, far too many people celebrated.

In that post, I quoted an opponent who wrote a letter to the editor, defending his right to celebrate the plant's closing. He claimed that Vermont Yankee's contributions to the area weren't real-he proved this through the use of quotation marks.

THE "JOBS" ARGUMENT is, in my opinion, a fear-mongering ploy by the wealthy to scare communities into submission... Do Entergy "jobs" make our lives better and its "charitable giving" add to the sustainability and happiness of our communities?

Yes, there was a lot of adversity near Vermont Yankee. As usual, this attitude led to solidarity among the people who were discriminated against.

At the time, this led me to a thought about my childhood. I remember asking my mother about why Judaism had survived so long. I expected the same answer I heard in Hebrew School: reverence for the Torah, etc. My mother surprised me by saying that, in her opinion, part of the answer for Jewish cultural survival was the existence of anti-Semitism.

Jewish people supported each other and Judaism because... we had no choice. "We few, we happy few, we band of brothers"? 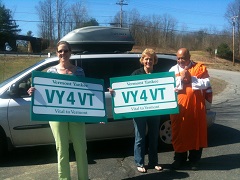 What will happen, now that the plant is closing? The focus has to be on the future, and on living well. If you don't mind the word "revenge," you can use the old saying that "living well is the best revenge."

For younger people, living well probably means getting out of town, taking their lumps on the declining local housing market, and starting anew. Yes, Exelon may (or may not) close some plants, but all plants aren't closing, and many people at those Exelon plants are retiring. Two years from now, the young people will be saying,  "I miss my old friends from Vermont Yankee, but I am sure happier in this town!"

Older people will probably have a more difficult time. I don't want to downplay this. Some of the problem is external. In my opinion, there is prejudice against older workers, no matter what the hiring agencies say. Some of the problem is internal. Older people may see the loss of a job and community as a betrayal of their life-long work and plans. They may be less interested in starting again or going somewhere new and exciting. For an older person, a loss is frequently not just a "bump in the road."

Still, there are options.

One option would be to spend less time working, but stay in the nuclear industry. Perhaps outage work or temp work, while continuing to live in the same house? I don't have the answers. I just think that with the nuclear workforce tilting older, outage work and temp work should be available to older workers, as full-time workers retire.

Non-nuclear workers will undoubtedly make very individual decisions, depending on their age, whether they have family connections to the area, etc.

Let's face it-go or stay, the Vermont Yankee plant closing is not a good thing. Everybody will have to make changes in their lives. Change is hard. Sometimes change is for the better. Sometimes it isn't. Everyone at that plant is smart and resilient, no matter what his or her age, and I think that the future will work out well for all of them.

Despair is not reasonable 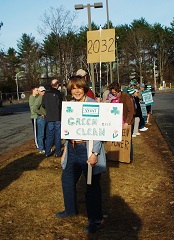 But the nuclear industry will survive (plants are being built all across the globe) and nuclear workers are resilient. Many Vermont Yankee people will leave the area, and some will stay. In my opinion, for both groups, despair is not reasonable.

The best future is a future in which you live well. Vermont is not the only place to live well. It's not the only beautiful state in America, and it is not friendly to nuclear workers. Most people at Vermont Yankee can probably do better somewhere else.

Meredith Angwin is the founder of Carnot Communications, which helps firms to communicate technical matters.  She specialized in mineral chemistry as a graduate student at the University of Chicago.  Later, she became a project manager in the geothermal group at the Electric Power Research Institute (EPRI).  Then she moved to nuclear energy, becoming a project manager in the EPRI nuclear division.  She is an inventor on several patents.

On August 27, Entergy announced that it plans to close the Vermont Yankee nuclear power plant in the fall of 2014, when the plant's current fuel is depleted. Entergy plans to decommission the...