Many people would like it to be theoretically possible to replace nuclear power with wind power, since the wind is a free resource. The way that I would like to approach the topic is to not discuss the source of power, but to discuss this question from the perspective of "intermittency." Stating the question another way: Can an intermittent source replace a baseload power source for producing electricity? This question has nothing to do with how the electricity is generated, but everything to do with when the electricity is generated.

The production of electricity involves understanding concepts such as capacity, capacity factor, and generation. These three concepts are often misunderstood and misused when comparing the generation of intermittent electricity with baseload generated electricity. It is sometimes useful to use a familiar analogy when explaining complicated topics. I will, therefore, use the automobile for this analogy, since many of us own a car and everyone is familiar with them.

Here is the analogy: Suppose there is a car on the market that is very environmentally friendly. Its mileage is phenomenal! I call it a "super-green" car.

This super-green car has the same horsepower as a conventional car. It will handle steep hills as well as a conventional car. It has the same 0 to 60 mph performance. The only difference is that when you try to start it in the morning, it will only start 25 percent of the time, and you can never predict on which day it will start. It runs, randomly, 25 percent of the time.

Would you replace your conventional car with a super-green car to get you to work every day? To keep the analogy simple, let us assume that if the car starts on a particular day, it will also take you home at the end of the workday. If it doesn't start on a particular day, however, it won't start that day no matter how often you turn the starter key.

To most people, the answer is obvious. Most of us would not hold on to a job very long if we randomly showed up at work only 25 percent of the time. So the answer is no, the super-green car cannot replace the conventional car. Horsepower is the equivalent of capacity in this analogy. An intermittent electrical power source with a capacity (or power capability when it is working) to generate 1000MW cannot replace a conventional power plant with a capacity of 1000MW. Even though the capacities are the same, the power plants are not equivalent. Yet capacity comparisons are made all the time, as if this somehow makes the power plants equivalent. They are not equivalent.

Another problem with using capacity factor as an equalizing parameter is that there are times when more than one car will start. The extra cars, however, are of no value to you as far as getting to work is concerned. The extra working cars do not average out with the demand to get to work on time each day. They are working at the wrong time.

Note that in the case of a wind farm, the probability of each turbine not working is not independent. If the wind doesn't blow in a particular area, it will affect all wind turbines. The probabilities are not randomly independent. Therefore, wind farms must be in separate weather patterns, in order to significantly reduce the unavailable time.

There is no perfect equalization parameter when making comparisons between intermittent and baseload generated electricity. Capacity is by far the worst, next comes capacity factor, and the best is generation, but it is not perfect.

Intermittent power sources can be of value, however, because they do save fuel in conventional power plants. But the economics are usually not very good at today's fuel prices. In the car analogy, I compute that my 20-mile round-trip commute to work would save me about two gallons of gas a month if the super-green car gets double the mileage of my conventional car. At $4 per gallon, that is $8 per month saving. It is obvious that, from an economic point of view, this saving is nowhere near the hundreds of dollars required per month to own an extra car. Similarly, I wrote an article explaining that wind farms cannot be justified on an economic basis, except in Hawaii, where expensive oil is used to generate electricity.

But perhaps using intermittent power plants can be justified environmentally. Perhaps not burning fossil fuels is worth the environmental benefit of not releasing as much greenhouse gases. Also, the fossil resource can be saved for other uses such as plastics. That argument breaks down, however, when the baseload generator is nuclear. Nuclear power does not generate greenhouse gases during operation. Saving the uranium for other uses is not applicable, because uranium has no other commercial uses. What exactly would we be saving it for?

So, to answer the general question, can wind power replace nuclear? The answer is clearly no. No technology is perfect, and there is always some impact in everything we do. Nuclear has the capability to meet the electrical needs for humanity for a millennia. That is a very compelling reason to use it, versus using a technology that only works intermittently and requires keeping all the conventional generators that we already have. 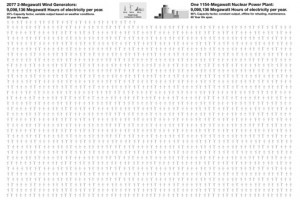 In Defense of Eyesores

Have you ever heard the joke about the football player who was so ugly that, whenever he stepped onto the field, he was penalized 15 yards for illegal use of face? Okay, you probably haven't...

The first two parts of this series (here and here) presented historical trends in electricity generation in California, and the growing use of in-state natural gas and imports of electricity...