This article is the first in a series of info-graphic presentations about nuclear energy. This graphic compares the energy density of nuclear to that of wind power. 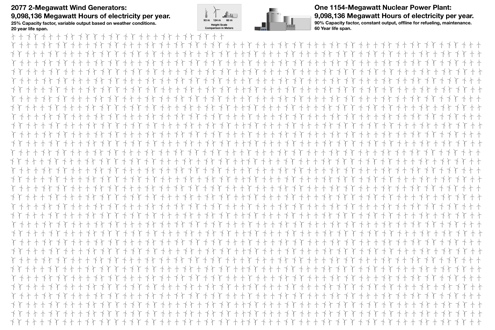 Wind power is dilute and variable so some may argue this isn't a fair comparison. Yet, we often read in news stories about a wind turbine being built that "can supply energy for 300 homes". This limited information creates a misleading impression that one turbine will produce that power continuously.

If wind power is compared to a yearly megawatt hour (MWh) figure that a nuclear plant can produce, the impression of what wind can power dramatically shifts. The numbers cannot be fully appreciated until they are fully visualized.

Wind generators, or wind turbines, have become a popular symbol of clean carbon free electricity. Unlike other sources of renewable energy such as hydro-electricity or geothermal, wind and solar power are variable producers of electricity. Since the wind does not always blow nor the sun always shine, any given wind turbine will never produce its full capacity rating for an extended period of time.

The ratio of electricity produced to the quantity it could produce over a year if it was running at full capacity is known as the capacity factor. For wind power, the average capacity factor is 25 percent, according to the U.S. Energy Information Administration.

Capacity factor is the feature highlight of this info-graphic poster. To make a graphic representation of how this compares to one nuclear power plant rated at 1154 megawatts (MW), this shows the full count of all 2077 2-MW wind turbines in a 24"x36" poster. This is what would be required to match the nuclear power plant output even if this array of turbines could hypothetically run continuously at only 25 percent of its rated capacity.

To achieve the same result with wind turbines, simply adding more turbines will not necessarily result in a greater amount of electric power or level it out to a continuous flow. Sometimes the wind is slow, non-existent, or even too fast for the turbines to use safely. Thus, this graphic shows a representation of how average wind-power performance could achieve the same amount of power as a nuclear power plant. Unlike a nuclear power plant, however, the output of wind is too variable to power a city. Like most electrical generators, the power output from nuclear and wind are integrated throughout the grid, although wind as a variable source does present some challenges for grid operators.

Wind turbines on wind farms would not be packed closely together as shown in this graphic. Optimally, wind turbines should be placed at least 7-15 diameter widths apart. Given that one 2-MW turbine can be taller than the Statue of Liberty, this can cover an enormous amount of land area with extremely tall structures. With this imaginary wind farm array, a minimum amount of land area required would be about 318 square miles and could include more for access roads, ground leveling, and tree removals. Wind farms are typically built in groups where the name-plate capacity can be 30-50 MW by 10-30 or more turbines. Thus, we will never see a group of 2077 2-MW (4154 MW name-plate capacity) wind turbines.

The 1154-MW nuclear power plant can typically occupy about 50 acres of land, often with a buffer space of land area of at least 1 square mile. The nuclear plant in this graphic is shown without an optional cooling tower, which can be up to 200 meters high.

The purpose of this graphic is to show a visual comparison of wind power to nuclear power with respect to capacity factors. Although there are many other factors to compare, capacity factor is a straightforward data-driven comparison that is an easy concept to understand-but often overlooked.

Jason Correia is an independent graphic artist and web designer who has worked on projects with PopAtomic Studios and Atomic Insights. He is dedicated to producing innovative and creative graphics and presentations to promote nuclear energy education and awareness. He has a BA in Industrial Design from San Francisco State.