One of my college roommates served for a while as the manager of our football team; we would talk about the "tape review" sessions that were used by the team to evaluate past performance and to prepare for future opponents. Nuclear organizations, for their part, often have highly developed "lessons learned" programs and they practice the use of technical methods that have been successfully employed by other organizations.

In that spirit, I would like to offer a "tape review" of the recent radio debate "Vermont Yankee: Power Struggle" that Meredith Angwin wrote about so beautifully for ANS Nuclear Cafe under the title of Be Here Now and The Debate.

My intent is not criticism-Richard Schmidt and Meredith both did a great job and already scored a win for the pronuclear team. My goal is to contribute to continuous improvement, help our team get ready for the next time, and build confidence for anyone else who gets an opportunity to publicly engage on the topic of nuclear energy.

The "here and now" philosophy that Meredith wrote about is important. People need to recognize and deal with the world as it is, not as we wish it would be. We should challenge our opponents to base their decisions on what IS, not what is dreamed about. Balance is also important, naturally, since if everyone always thinks of only here and now, the future for our children will be pretty grim.

We can make reasonable attempts to predict and influence the future so that it is closer to what we want. We can, for example, predict exactly when the sun will set every day. We can also predict its elevation angle based on time of day, day of year, and elevation. With those predictable numbers, we can chart the maximum power available to collect at any given time-while factors like clouds, snow, and shade from neighboring trees reduce the amount available.

During a debate, a good prop for that statement is an old celestial navigation book with a sun table in it. You can pick one up on the web or at a used book store. A few ancient implements that were used to measure the sun's travel-perhaps a sextant or a sundial-might also help to illustrate just how much understanding mankind has had about the sun's behavior and how long we have collectively owned that understanding.

Unlike the scheduled operation of a coal, oil, gas, or nuclear plant, we usually have no real way to predict when and where the wind will blow or for how long. While we know how much it costs to run power cables from one point to another, we do not know specifically whose backyard will host those cables, along with the necessary towers and clear cut corridors, if we want to use someone else's wind to back up our own.

In contrast, we can predict, based on demonstrated history, that completed nuclear plants can run for at least 50 years (the USS Enterprise recently celebrated its 50th birthday), and probably for 60-80 years. We know how much nuclear fuel has cost in the past and can do a pretty fair job of predicting the cost in the future. We also know that used nuclear fuel still contains 95 percent of its initial energy, and we know how to capture at least some of that energy through recycling. We have no way of knowing what natural gas prices will be in two years. 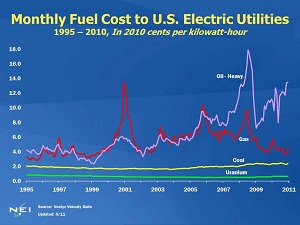 During the debate, Richard did a good job in declaring that coal is the alternative in the world in which he lives and works; and in his next opportunity in a public forum, he should use his own experience with a solar energy system to concisely explain why solar can NEVER replace either coal or nuclear NO MATTER WHAT engineering improvements are made. It is perhaps even better to stress that point about solar than the true statement concerning coal and the way things work now. Alternatively, another possible response would be to allow an opponent like Michael Daley to attempt to win supporters (for pronuclear!) by describing-in detail-exactly what it means to live in a "100 watt house".

Aside: I have visited Michael's 100 Watt home website. I wonder if Michael and his wife actually live in the 100 watt cabin, or if it is just a writing retreat. His website describes it thusly: "Michael writes his books in a five foot by five foot tower room on a solar-powered laptop computer. He lives in Westminster, Vermont with his wife, award-winning children's author Jessie Haas." However, the solar cabin is in Putney, about five miles away from Westminster. End aside.

The Walden Pond-style of simple living might appeal to some, but most Americans would immediately see that day-to-day living in a space that is 12 feet by 16 feet is not quite their idea of the American dream. That is especially true if living there means constantly monitoring the charge level on the battery system and the fuel state of a noisy generator. In a debate environment, there is nothing wrong with letting the opposition try to sell their vision-especially if it is one that is not all that attractive.

Another topic in the debate where Richard and Meredith could turn the opposition's assumed strengths into a negative for the audience is in the economic area. Michael Daley stated on several occasions that his reason for opposing Vermont Yankee was that Entergy would not agree to give Vermont a discounted rate on electricity. The details there are important; Entergy had been selling power to Vermont for 4 cents per kilowatt hour and wanted to start selling at a market determined rate. It was willing to sign a long-term contract for 6 cents per kilowatt hour.

Compared to the 20 cents per kilowatt-hour that Vermont power companies pay for unreliable wind and solar electricity, 6 cents per kilowatt hour is a huge discount. Armed with numbers and hard copy charts (if prepared carefully in advance), nuclear power supporters should always be willing to talk about economic comparisons with renewable energy advocates.

I'll now turn the microphone over to others who might have had a chance to listen to the debate. What else should we learn from this engagement? What other facts should we be ready to introduce, what appeals to emotion should we use in addition to appeals to reason, and how should we respond when challenged that "we do not know" what might happen in the future-if in reality the topic under discussion is rather predictable for those who have already done the study and calculation?

Rod Adams is a nuclear advocate with extensive small nuclear plant operating experience. Adams is a former engineer officer, USS Von Steuben. He is the host and producer of The Atomic Show Podcast. Adams has been an ANS member since 2005. He writes about nuclear technology at his own blog, Atomic Insights.
Tags:
entergynuclear opponentsview from vermontwind power
Share:
LinkedInTwitterFacebookEmail

New York Attorney General Letitia James filed a lawsuit on behalf of the State of New York against the Nuclear Regulatory Commission over the sale of the Indian Point nuclear power plant to...