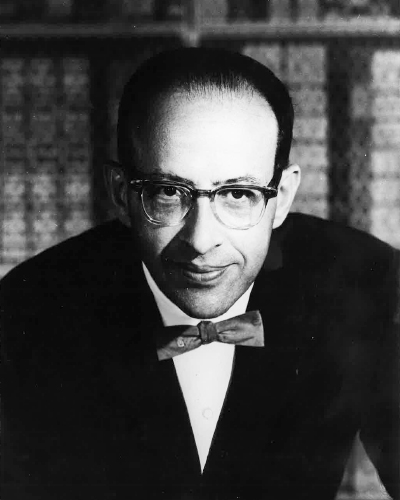 Dr. Chauncey Starr was the 4th president of the American Nuclear Society (ANS) and was a charter member. He also a recipient of the ANS awards: Walter H. Zinn Award in 1979 and the Henry D. Smyth Award in 1983. He was a Fellow of ANS.

In 1942, while at the Bureau of Ships heading a group of engineers working on electronic detection of mines, he was invited to join Ernest Lawrence’s staff at the University of California Radiation Laboratory. Dr. Starr was subsequently transferred to Oak Ridge to serve as Lawrence’s liaison and directed a group of several hundred engineers that made crucial improvements to the yields of the beta calutrons; by the spring of 1945 Oak Ridge had produced enough 235U to arm the Little Boy weapon used against Hiroshima.

After the war, Dr. Starr transferred to Clinton Laboratories at Oak Ridge to participate in the nuclear power reactor design efforts led by Eugene Wigner and Alvin Weinberg. In 1946 he joined North American Aviation, and in 1955 he formed and became president of a new division, Atomics International, to pursue commercialization of the generation of electricity from nuclear power. In collaboration with Walter Zinn at Argonne National Laboratory and the first president of ANS, Chauncey explored the peaceful application of atomic energy to the generation of electricity. In 1966 he left Atomics International to become dean of engineering at UCLA; six years later he founded the Electric Power Research Institute. Chauncey also made substantial contributions to the discipline of risk analysis while at UCLA and established an environmental division at EPRI.

For his accomplishments, Dr. Starr received the American Physical Society’s 2000 George E. Pake Prize and numerous other awards and recognition, including honorary degrees, membership in national and international academies, medals from heads of state, and fellow status in professional societies.

Dr. Starr earned an electrical engineering degree from Rensselaer Polytechnic Institute in 1932 and a Ph.D. in physics in 1935.