A Brief History of the American Nuclear Society

The American Nuclear Society was launched in the mid-1950s, a time of growing interest in employing peaceful applications of nuclear science and technology for bettering the lives of people in the United States and around the world. President Eisenhower had presented his dramatic 1953 "Atoms for Peace" speech to the United Nations, proposing international knowledge-sharing for development of civilian nuclear science and technology. While a number of associations already had nuclear divisions or groups, many people felt that a new organization was needed. Following its establishment in 1954 as a not-for-profit association of individual members, the Society quickly added breadth and depth to its activities, resulting in an organization that was both influenced by and had an influence on the burgeoning nuclear field. 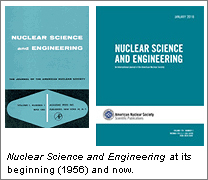 In the mid-to-late 1950s, ANS was already putting in place many of the elements that still make up the organization. In June 1955 ANS held its first Annual Meeting and elected its first President, in March 1956 launched its first journal (Nuclear Science and Engineering), and in November 1956 formed its Standards Committee. By the end of the 1950s, ANS had three professional divisions, 14 local sections, and 11 student branches. 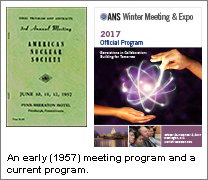 During the 1960s ANS grew rapidly, driven in no small part by the construction of many nuclear plants in the United States and elsewhere for generating electricity, and also by the research in using the technology for a variety of other uses, from aerospace to merchant ships to medicine. By the end of the 1960s, ANS had 12 divisions, 28 local sections, 40 student branches, three periodicals (two journals and a magazine), and was running two national meetings and several topical meetings each year.

Each succeeding decade has brought changes both to ANS and to nuclear science and technology. In the 1970s, ANS became even more international minded than it already was, and also took its first formal steps in outreach activities. The 1980s became a time of focus on operating the plants, since there were no new U.S. plant orders, and an increased emphasis on radioactive waste management; the U.S. federal government enacted major legislation about both low- and high-level wastes and ANS started its Fuel Cycle and Waste Management Division. In the 1990s, amid consolidation in the industrial area, ANS increased its visibility in Washington, D.C., carried out its first professionally directed strategic planning, and worked on shoring up the supply of qualified people for the nuclear field.

While ANS is national and international in its scope, its base is its headquarters in La Grange Park, Illinois. It did not start there, however. As with many associations, ANS moved around some during its early years. ANS's first "home" was in space provided by the Oak Ridge Institute of Nuclear Studies in Tennessee. In 1958 the headquarters were moved to small offices in downtown Chicago, and in 1964 the headquarters were moved to larger offices spaces in Hinsdale, Illinois. Finally, in 1977 the Society moved to its own headquarters building (owned by ANS) in La Grange Park, Illinois.

ANS has made, and continues to make, important contributions to the use of nuclear science and technology, and consequently to the larger society beyond ANS. It achieves this through its many products and services, including meetings, publications, standards, outreach, honors and awards, scholarships, teachers workshops, Organization Members, and representation in Washington, D.C.

ANS continues to be a professional organization of scientists, engineers, and other professionals devoted to the peaceful applications of nuclear science and technology. Its 11,000 members, from over 40 countries, come from diverse technical disciplines ranging from physics and nuclear safety to operations and power, and from across the full spectrum of the national and international enterprise, including government, academia, research laboratories, and private industry. Making it all succeed are a Board of Directors, 20 standing committees, 19 professional divisions, one technical group and two working groups, 32 local sections, over 35 student sections, liaison agreements with over 30 non-U.S. nuclear societies, and a headquarters staff of about 50 people.

Some Milestones in ANS's History