Since the natural gas price collapse that started in summer 2008, many observers have become accustomed to using the adjective "cheap" when talking about natural gas. Like the word "clean," another adjective often applied to methane, "cheap" is a relative term. It is also a term whose applicability depends on time and location. As I wrote in a recent post on Atomic Insights, gas is only really cheap if nobody needs it. When demand increases due to some kind of perfectly natural phenomenon-like a winter with near normal temperatures-demand can exceed deliverability by a large margin.

When that happens, the only way that markets can match demand to supply is to allow the price to climb to a level high enough to destroy some of the demand. Because the infrastructure for extracting, storing, and delivering gas cannot be rapidly altered, suppliers are unable to bring additional supplies to market in time to provide relief.

Late last week, the price of natural gas at three major trading locations-New England, New York, and Mid-Atlantic-exceeded $70.00 per MMBTU. It is worth seeing the table for yourself. 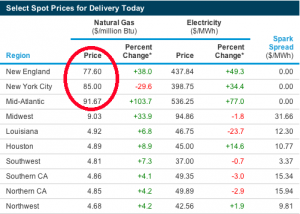 Those prices are, of course, spot market prices that do not apply to customers that have signed long-term supply contracts; but since long-term contracts are often priced at a level that is substantially higher than the short-term spot market, many customers have been loath to buy the protection offered. Home heating delivery companies are generally seen as utilities that supply a vital need, so they have traditionally signed long-term contracts with priority delivery clauses. Most merchant power generators have taken the risk associated with short-term contracts.

When gas prices get too high, those merchant generation companies have a simple choice; they stop buying fuel and stop generating power.

During last week's brutal cold weather in New England there was a day when 75 percent of the region's natural gas-fired power generators were unable to operate, presumably because there was an insufficient amount of gas to supply both heating demands and power demands.

Even with the delivery-related demand destruction, withdrawals from working gas-in-storage reservoirs has been running at a higher pace than at any time during the past five years, resulting in a current gas-in-storage inventory that is about 14 percent below the five year average for this time of year. Natural gas analysts are starting to speculate about the ability to maintain a sufficient storage buffer to complete the winter. 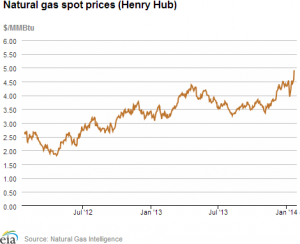 To maintain grid stability, the New England independent system operator resorted to using combustion turbines supplied by diesel or jet fuel. Though distillate oil is normally a premium fuel best reserved for transportation, it has an advantage over gas in times of high demand. Because it is more readily stored, it can be staged in advance so that it is ready to run when demand soars-at least until the tanks run dry.

It has not yet made the news, but there are probably quite a few New Englanders who are happy that they still have heating oil in tanks on their own property. The oil heat advocates at American Energy Coalition would certainly like to spread the word that gas may not always be the best source of winter heat.

Fortunately, the US power grid has not yet arrived at the state that seems to be the goal of the natural gas marketing departments and their allies in the media. Not only are there still a number of coal- and oil-fired power plants that are still capable of running, there are still 100 operable nuclear power plants that thrive on colder weather.

Though there have been one or two operational issues, the monthly nuclear power plant performance report for December 2013 showed a total generation of more than 71 billion kilowatt hours for an average capacity factor of 97.6 percent.

So far in January, nuclear plant performance remains impressive; with some days reaching average capacity factors in excess of 97 percent. Much of this performance comes from well executed maintenance strategies and adverse weather plans. Those preparations allow operators to take timely action to minimize the probability of weather-related outages.

Nuclear plants have a reliability advantage over their fossil fuel competitors; they usually enter high demand, bad weather seasons with "fuel tanks" that contain many months' worth of accessible fuel. All other competitors can run into fuel-related problems when deep cold persists for too long. Coal piles have been known to become solid blocks of ice, gas lines can freeze, and even diesel fuel can get syrupy if not properly stored.

Nuclear power plant operators also benefit from fuel prices that do not change as a result of high demand periods-the average cost of commercial nuclear fuel in the United States remains steady at between $0.50 to $0.60 per MMBTU. For merchant power plant operators, the cold weather is providing a great opportunity to bank some terrific returns. If you look at the daily spot market price table above, you can see that electricity prices were very robust, especially for companies that operate generating plants with an average operating and maintenance cost of $24 per MW-hr.

It would be terrific if the operators that benefit from selling their output at those generous prices stash some of the money away for those balmy spring days when few people need gas for heat. Gas still is a cheap and relatively clean fuel when the demand is low. There will again be times in the near future when gas-fired generators sell their output at prices that are not profitable for many others on the grid.

Maybe one lesson worth learning this winter is that an electric grid supplied by integrated power utilities operating under rate regulation with an obligation to serve is not such a bad arrangement after all. Electricity is too important for the rest of the economy to allow its price and availability to be so dependent on the whims of the weather.

There is another lesson that is specifically applicable to the state of Vermont. Vermonters, you still have a licensed and operating nuclear power plant that supplies power to your regional grid that is equivalent to 85 percent of your total consumption. For political reasons, you elected a governor and representatives that made that plant feel so unwelcome that the owners have decided to shut down the plant instead of refueling it and continuing to operate for the rest of its licensed life.

It's not too late to take note of the way weather has been affecting your regional grid this year and consider how bad things might get if Vermont Yankee gets shut down as currently scheduled. Take a look at the possible impacts of following through with the proposed Total Energy Study.

Once you have imagined that scenario, pick up the phone and call some of your government leaders. Tell them that you want them to ask Entergy to keep the plant running. Tell your representatives that they have your permission to beg for forgiveness if necessary.