During an earnings call on February 6, 2014, Exelon Corporation indicated that it may decide to shut down two or more of its nuclear reactors because of poor economic return. Exelon spokespeople have been warning about the effects of negative electricity prices for several years.

On February 8, 2013, almost exactly a year ago, the Chicago Tribune published a story titled Exelon chief: Wind-power subsidies could threaten nuclear plants. The Tribune noted that Christopher Crane, Exelon's CEO, was concerned about the continued operation of some of the units in the company's large fleet of reactors:

"What worries me is if we continue to build an excessive amount of wind and subsidize wind, the unintended consequence could be that it leads to shutting down plants," Crane said in an interview.

Crane said states that have helped to subsidize wind development in order to create jobs might find themselves losing jobs if nuclear plants shut down.

The Chicago-based company doesn't have any immediate plans to mothball nuclear plants, although at least one analyst has predicted that could occur as soon as 2015.

"We continue to believe that our assets are some of the lowest-cost, most-dispatchable baseload assets and don't have any plans at this point of early shutdown on them," Crane said.

If the discussed nuclear reactor shutdowns occur, they would be numbers six and seven in the count of prematurely closed nuclear power plants in the United States since the beginning of 2013. Though there are certainly antinuclear activists and analysts who will point to this record with a delighted "We told you so," this is not a trend that bodes well for the economic stability of the United States or for the continued effort of the US to reduce its dependence on hydrocarbon fuel sources.

It is also a trend that puts a number of nuclear professionals at risk of suffering a significant economic setback and life-altering job loss, despite having participated in an exceptional example of continued performance improvements over a sustained period of time.

During a recent industry gathering hosted by Platts, Dr. Pete Lyons pointed to the trend of shutting down well-maintained and licensed nuclear power plants as something that is worrying the current Administration, especially because it will make it difficult to achieve progress in reducing CO2 emissions.

Jim Conca, writing for Forbes, noticed Exelon's announcement and wondered about its effect on a number of important attributes of energy production. He reminds his readers that nuclear plants represent a large fraction of the emission free electricity produced in the United States each year. He also points out that the longer nuclear plants run and produce revenue, the better. Construction costs are already sunk, the plants already have stored inventories of spent fuel, and they already require some form of decommissioning. The costs and pollution associated with all of those features should be spread over as many kilowatt hours of generation and revenue as possible.

There are several things that nuclear energy advocates can do that might help to eliminate the pressures that have been encouraging nuclear plant operating companies to either shut down or consider shutting down useful assets.

During the winter of 2013-2014, there have been a number of examples of the risks associated with concentrating heating, industrial uses and electricity production on natural gas, just because it has been accepted as "clean" and seems to have become abundant and cheap-ever since 2008-which is apparently a long time ago in the memory of some market observers and decision makers. The Nuclear Energy Institute continues to produce excellent materials and testimony about the importance of fuel diversity; they need as much assistance as they can get in spreading the message.

This winter there have been reported shortages and price spikes that have exceeded $100 per MMBTU. That is roughly equivalent to oil prices hitting $580 per barrel, since every barrel of oil contains 5.8 MMBTU of heat energy. Natural gas price spikes have not been limited to the northeast; spikes exceeding $20 per MMBTU (five times the pre-winter price) have occurred in the mid-Atlantic, the Pacific Northwest, the Chicago area, southern California and even Texas. Last week, a price spike of $8.00 per MMBTU even showed up at Henry Hub, at the intersection of several prime US gas production areas. 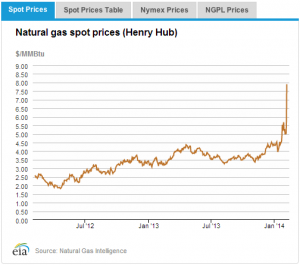 In markets where wholesale electricity prices have been deregulated, gas fired generators are usually the marginal price setters, so the spikes in natural gas prices have directly affected electricity prices at times of peak demand, driving them to infrequently seen levels. It remains to be seen how the electricity price spikes this winter have affected revenues at generating companies, but it is unlikely to have harmed their bottom line. Unfortunately, brief spells of profitability may not be enough to encourage nuclear plant operators to keep running their plants if wholesale prices return quickly to loss-making level for much of the year.

Though many of us value the fact that nuclear plants do not produce any greenhouse gases or other air or water pollutants, that feature does not produce any additional revenue for plant owners. For the past twenty years, every alternative to fossil fuel except nuclear and large hydroelectric dams have been given direct subsidies, preferential tax treatment and quotas. Fossil fuel generators have not been charged for their use of our common atmosphere as a waste disposal site. It is time to put pressure on our representatives to pass legislation that establishes a price on carbon so that investors are encouraged to fairly value clean generation.

My personal favorite proposal is James Hansen'e fee and dividend approach where all hydrocarbon fuels pay a fee based on their carbon content and the public receives an equal share of the revenue. People who are careful and do not use much fuel will see a positive increase in their income; people who use more than average will see a net cost. Investors will recognize that it is worth their effort to identify technologies that do not emit CO2.

We also should advocate policies that reward generators for their ability to produce reliable electricity. It is a valuable service that helps to ensure that the grid is adequately served with a sufficient margin, and that we avoid the kind of volatility seen this past winter and that nearly bankrupted California in 2001.

Finally, we should seek to reverse the reluctance to tout the product we produce. Electricity is a wonderful tool that makes life better. It can be produced using a variety of fuels, though most readers here would probably agree that uranium and thorium are the best available electricity generation fuels. It's time to recognize that the energy business is competitive. Like all competitive enterprises, it rewards people who fight for market share by producing a better product and by taking effective action to ensure that people know they are producing a better product.

While traveling through the southeast US last week, I heard an advertisement that made me smile. Alabama Power was offering to give people water heaters as long as they were shifting from gas heaters to electric heaters. Why have we allowed competitive energy producers to steal markets for so many years without fighting back?

I encourage people in the electricity production business to download a copy of the Jan/Feb 2014 issue of EnergyBiz and read the article titled Gas Competes with Power; A New Foundation Fuel, New Business Channels. While you are at it, you might also enjoy reading the challenge that NRG Energy's David Crane lays down for the traditional business of generating and distributing electricity in his guest opinion piece titled Keep Digging: What Lethal Threat? 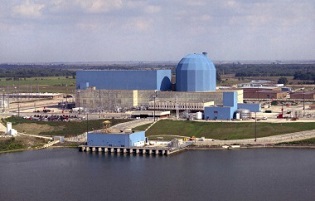