The process for renewing research and test reactor (RTR) licenses in the United States has been subject to lengthy delays and periodic backlogs since the early 1980s. Despite the apparent time invested in improvement efforts, the process does not seem to be getting better very fast. The difficulty, schedule uncertainty, and cost of renewing research reactor licenses adds to the burden of owning and operating research reactors. The scale of the challenge may contribute to regrettable institutional decisions that maintaining operable facilities is not worth the trouble.

Here is the background that led me to those conclusions:

A couple of weeks ago, one of the email lists I read provided an intriguing press release announcing the renewal of Dow Chemical Co.'s TRIGA research reactor located in Midland, Mich. The intriguing part of the story was that Dow had initially filed its application to review the license in April 2009 and the 20-year extension was awarded on June 18, 2014, more than five years later. One of the more frequent contributors to the list had the following reaction:

Seriously? It took more than five years to renew a TRIGA license? That in itself might be an interesting story.

I followed up with a request for information to the Nuclear Regulatory Commission's public affairs office. Scott Burnell replied promptly with the following information:

The background on the staff's ongoing effort to improve RTR license renewal goes back quite a ways. Here's a relevant SECY and other material:

I'll check with the staff Monday on what information's available re: staff hours on the Dow RTR renewal review.

Burnell sent the staff hour estimate for renewing the Dow TRIGA reactor license. Not including hours spent by contractors, the NRC staff took 1600 hours to review the renewal application. Since Dow is a for-profit company, it was charged $272 per hour, for a total of $435,000 plus whatever contractor costs were involved. That amount just covers the cost of regulator time, not the cost of salaries and contracts paid directly by Dow to prepare the license application, respond to requests for additional information (RAI), and engage in other communications associated with the applications.

Based on the cover letter for the issued license, Dow sent 19 letters to the NRC related to Dow's application during the five-year process.

The references supplied by Burnell provided additional information about the process that is well known within the small community that specializes in research reactor operations, maintenance, and licensing.

For example, the last renewal of the Rensselaer Critical Facility, a 100-Watt open tank reactor that was originally licensed in 1965, was initially submitted in November 2002 and issued on June 27, 2011, nearly nine years later. The NRC did not send Rensselaer an RAI until three years after it had submitted its renewal application. 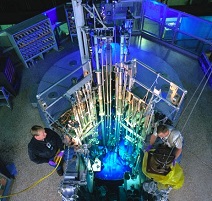 In a second example, the University of Missouri-Columbia Research Reactor (MURR) submitted its most recent license application in August 2006. The NRC sent its first set of RAIs in July 2009 and followed up with at least five more sets of RAIs that included a total of 201 questions of varying complexity. According to the NRC's listing of research reactors currently undergoing licensing review, the MURR license has not yet been issued.

A third example is the Armed Forces Radiobiology Research Institute TRIGA reactor. Its license renewal application was submitted in July 2004 and is still under review. In 2012, AFRRI estimated that it would be spending at least $1 million for its share of the license review process, not including expenditures by the NRC. Since AFRRI is a government organization, the NRC does not bill it for fees. Burnell indicated that the staff hours expended on that project could be 6,000 or more. It is sadly amusing to review the brief provided by the AFRRI to the NRC in 2012 about the process. (See page 52-65 of the linked document.) The following quote is a sample that indicates the briefer's level of frustration.

Question: Once the licensee demonstrates that the reactor does not pose a risk to the heath and safety of the public, what is the benefit provided to the public by the expenditure of $1M to answer the additional 142 RAIs?

In a quirk of fate, numerous research license renewals have often come due when NRC priorities have been reordered by external events. Research reactors receive 20-year licenses; numerous facilities were constructed in the late 1950s and early 1960s. Dozens of renewals came due or were already under review in April 1979 when the Three Mile Island accident and its recovery became the NRC's highest priority items.

About 20 years after that backlog got worked off, the 9/11-inspired security upgrades pushed everything else down on the priority list. 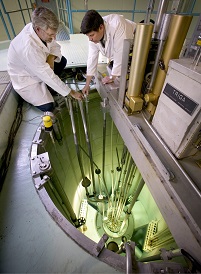 The research reactor office has experienced staffing shortages, often exacerbated by the small pool of people with sufficient knowledge and experience in the field. When the NRC hunts for talent, it is drawing from the same pool of people that staffs the plants and is responsible for filing the applications for license amendments and renewals.

One aspect of the law that eases the potential disruption of the licensing delays is a provision that allows continued facility operation as long as there was a timely submission of the renewal application. That provision, however, has often resulted in a lower priority being assigned to fixing the staffing shortages and the complex nature of the license application process.

The facility owners don't want to complain too loudly about the amount of time that their application is taking, since they are not prohibited from operating due to an expired license. NRC budgeters and human resource personnel have not been pressured to make investments in improving their service level; not only do the customers have no other choice, but they have not squeaked very loudly. Here is a quote from a brief provided to the NRC by the chairman of the National Organization for Test, Research and Training Reactors (TRTR).

(Pages 26-28 of the linked PDF document containing several briefs, each with its own slide numbering sequence.)

Once the high priority responses have died down and backlogs of license reviews in progress have reached levels in excess of 50 percent of the total number of research reactors in operation, the NRC has stepped in and directed improvement efforts. The staff has attempted to improve the process by issuing more guidance, but those attempts have often complicated and delayed the applications that are already under review.

The Interim Staff Guidance (ISG) issued in June 2009 appears to still be active; it is difficult to tell how much progress has been made on the long-range plan that ISG outlined. Once again, external events have changed the NRC's priorities as most available resources during the past three years have been shifted to deal with the events that took place in Japan in 2011 and the effort to come up with some kind of waste confidence determination.

There are no easy solutions, but repairing the process will require focused and sustained management attention. 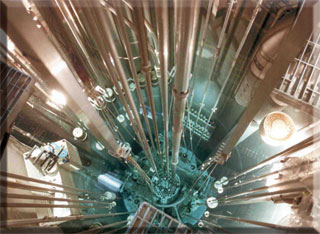 TRIGA at University of California, Davis