In 1970, Robert O. Anderson gave David Brower $200,000 as seed money to form the virulent antinuclear group that calls itself Friends of the Earth. I learned that important piece of information while reading a book by F. William Engdahl titled A Century of War: Anglo-American Oil Politics and the New World Order. Here is the passage that opened my eyes:

The discovery moved Anderson up to exhibit number one in my long-running effort to prove that the illogically tight linkage between "environmental groups" and "antinuclear groups" can be traced directly to the need for the oil and gas industry to discourage the use of nuclear energy.

Aside: I have always categorized opposition to nuclear energy from people who are concerned about humanity's impact on the environment as "illogical." The foundation for my unshakeable belief that nuclear fission energy systems are environmentally beneficial is my up-close and personal experience with operating a nuclear reactor inside a sealed submarine deep underwater.

Even at high power, fission energy produces nothing that needs to be dumped from an exhaust stack, unlike all of its competitors. It is possible to design reactors to operate for decades without new fuel; that means that the supply infrastructure has a tiny environmental impact in comparison with all other controllable power systems. Logically, environmentalists should be some of the strongest supporters of nuclear energy development; it has the proven ability to reduce the negative impacts known to be associated with burning fossil fuels. End Aside.

Without a strong effort to layer as many restrictions as possible on its development, the natural technical advantages of atomic fission would have long ago made oil and gas worth far less than they are today. Robert O. Anderson was fully aware of that fact, something that can be proven with a passage from Daniel Yergin's The Prize: The Epic Quest for Oil, Money and Power. In 1956, President Eisenhower sent Anderson on a secret mission to pressure the king of Saudi Arabia to help western interests resolve the Suez Crisis. Eisenhower gave Anderson a lever to use as a source of political pressure; he told him to tell the king that the United States had the ability to disrupt world oil markets using nuclear energy.

That same month (September 1956), with the Suez crisis still brewing, Robert Anderson, a wealthy Texas oil man who was much admired by Eisenhower, made a secret trip to Saudi Arabia as the President's personal emissary. The objective was to get the Saudis to apply pressure on Nasser to compromise. In Riyadh, Anderson warned King Saud and Prince Faisal, the Foreign Minister, that the United States had made great technical advances that would lead to sources of energy much cheaper and more efficient than oil, potentially rendering Saudi and all Middle Eastern petroleum reserves worthless. The United States might feel constrained to make this technology available to the Europeans if the canal were to be a tool of blackmail.

And what might this substitute be, asked King Saud.

Neither King Saud nor Prince Faisal, who had done some reading on nuclear power, seemed impressed, nor did they show any worry about the ability of Saudi oil to compete in world energy markets. They dismissed Anderson's warning.

As a man with extensive and growing investments in oil resources located all around the world, Anderson had no logical reason to help anyone, especially the Europeans, develop an energy source "much cheaper and more efficient than oil".  He had about as much interest in rendering "petroleum reserves worthless" as King Saud or Prince Faisal.

The oil and gas industry is full of savvy people who understand how to market products to customers; I am sure that Anderson and his associates were aware that any effort to attack nuclear energy that was transparently led by the petroleum industry would fail. They needed to find proxies if they were going to have any success.

Industry decision makers must have been fully aware of the battles that had been fought in the late 1950s and early 1960s to stop above-ground nuclear weapons testing. I suspect that petroleum suppliers made a conscious decision to take advantage of the political strength of antinuclear weapons activism and pivot it into antinuclear energy opposition. The chances of success would be even higher if they could make the strategic decision to take the moral high ground and claim that opposition to nuclear energy arose out of "environmental" concerns.

David Brower's fall out with the Sierra Club in 1969 provided a wonderful opportunity for Anderson. Brower had an established reputation as a leading environmentalist and he needed money to continue his efforts. He had already engaged in battles against nuclear energy, but was often opposed on the Sierra Club board of directors by more technically qualified people who recognized that nuclear energy was more environmentally friendly than either fossil fuel or hydroelectric dams. (Note: The Sierra Club's political activism began with battles against dams that threatened to transform flowing rivers and scenic valleys into stagnant lakes.)

Some readers might think at this point that I am "going conspiratorial" and that there is no evidence that Anderson's action to fund Friends of the Earth was part of a broader strategy. My defense is to remind doubters that oil industry leaders gather and talk in private on a regular basis; describing how they often cooperate to advance their common interests has nothing to do with wild conspiracy theories. Another bit of history to take into account is that Anderson served many years as chairman of the Aspen Institute, a group that has never made any secret of the fact that it organizes forums so that "leaders" can get together to develop action campaigns.

Other doubters may go to the trouble of digging deeper into Anderson's biographical details to find evidence that he may have actually favored nuclear energy. In fact, there is such a statement in the obituary that the New York Times published on December 6, 2007.

He was also a Reagan Republican who held many top nonelected posts in the Republican Party and favored nuclear power and a smaller federal government.

Of course, it is very easy to say that you favor nuclear energy while working behind the scenes to erect barriers to its development. That statement should not need any links or evidence for anyone that has been paying attention to political statements during the past half-dozen years.

Part of my goal in sharing this history is to provide a counterpoint to an idea that seems to be almost conventional wisdom in the nuclear industry. As illustrated in a recent commentary on American Thinker titled Nuclear Power's New Friends?, too many nuclear professionals think that environmentalists are natural enemies that cannot be trusted, even when they express support for our technology.

The notion of environmentalists suddenly embracing nuclear power remains personally unsettling. After 40 years of watching the movement damn all things nuclear, and ginning up one fallacious witch hunt after another, I can't really trust the movement or their motives.

Some in the nuclear power business, especially on the public relations side, welcome a possible coalition of environmental groups arguing for climate change restrictions (but nominally pro-nuclear) and the nuclear power industry itself. When you have so few political friends, even a professional movement environmentalist can look like your new BFF (best friend forever).

As I mentioned in the aside near the beginning of this post, I believe that people who are concerned about the environment, and who believe that we should tread as lightly as possible on the Earth, are the natural allies of nuclear technology. This technology enables us to do a lot more with a lot less material (e.g., think of those cards that American Nuclear Society members pass around showing that a single pellet of nuclear fuel contains as much energy as 147 gallons of crude oil or 17,000 cubic feet of natural gas).

I believe that environmentalists are correct to be worried about the unknown effects of continuing to dump in excess of 30 billion tons of carbon dioxide into our atmosphere every year.  In my opinion, the tepid response by some nuclear professionals to the climate change issue can be traced to the fact that many people who seem to be in the nuclear industry are actually in the revolving door between nuclear energy and fossil fuel energy.

The vast majority of environmentalists are sincere, family-oriented people who love both nature and humanity.  I base that statement on my experience with professional environmentalists.  For more than 5 years I frequently socialized with them because my wife worked for the Chesapeake Bay Foundation and often tapped me to help with their events. At the same time, I got to know some of the executives in the movement and learned that they were often people with inherited money linked to energy or banking who drove electric cars to the office-and high-powered sports cars or SUVs in their free time.

From my point of view, the people who have logical reasons to strongly oppose the use of nuclear energy are those who stand to lose wealth and power if it makes their products worth less. If it seems irrational to you when environmental groups promote natural gas and overlook refinery explosions, while fighting nuclear power stations and emphasizing tiny tritium leaks, remember that some of their money comes from people who sell oil and natural gas.

Endnote: Even in 1956, Anderson was obviously exaggerating when he told King Saud that nuclear energy would make oil "worthless". Petroleum has far too many valuable properties to ever be worthless; however, it should be obvious to the most casual observer that oil does not have to be priced at $108 per barrel (Friday, August 2, price for Brent crude oil as reported by Bloomberg.com). 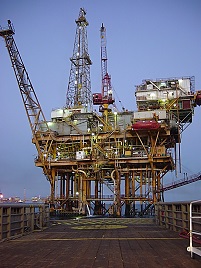 Oil would be worth a lot less than that if more of the world's energy needs were provided by atomic fission. If oil was worth less, it would make no economic sense to press it out of shale rocks in North Dakota, drill for it deep under the Gulf of Mexico, or try to extract it from the challenging environment of the Arctic Ocean.

Our natural allies in the environmental community would be happy if none of those actions were necessary, but our rivals in the oil and gas industry might resist the notion with vigor.