In my previous article on the history of nuclear pulse propulsion, I outlined three research programs in nuclear propulsion systems for space travel.  The first of these, Project Orion, was investigated in the 1950s and 1960s as a very serious and practical option for space travel.  Its only limiting factor was the signing of the International Test Ban Treaty in 1963 that barred the detonation of nuclear weapons in space.

Fast forward to 2003.  Andrews Space & Technology (AS&T) introduced an innovative propulsion system that could significantly shorten round trips from Earth to Mars (from two years to only six months) and enable our spaceships to reach Jupiter within a year of space travel. The system is called the Miniature Magnetic Orion (Mini-Mag Orion for short), and is an optimization of the 1958 Orion interplanetary propulsion concept.  The system has the potential to dramatically affect interplanetary space travel.

The original Orion project was headed by Ted Taylor from General Atomics, who together with the famous physicist Freeman Dyson suggested ejecting nuclear explosives behind a spacecraft in order to propel it forward. The Mini-Mag system uses a magnetic field to trigger an explosion of compressed material in the form of small pellets weighing several grams. This explosion, although significantly weaker than a nuclear explosion, creates plasma that is directed through a magnetic nozzle to generate vehicle thrust. The proposed technology enables the production of thrust at high efficiency, allowing drastic reduction of interplanetary travel time. According to calculations performed by AS&T, this type of propulsion system could produce the same thrust as the Space Shuttle Main Engine, with 50 times more efficiency. 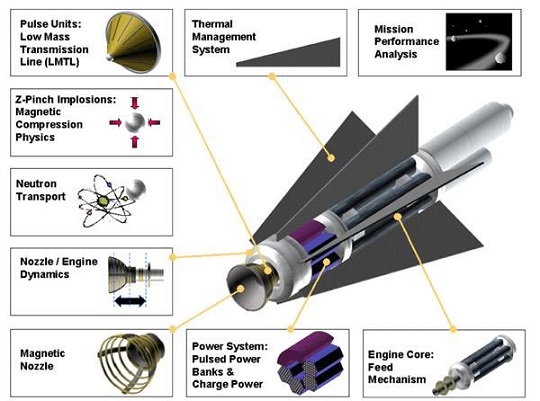 Due to the magnetic compression thrust technology, spacecraft could be smaller and lighter. The spacecraft itself would only need to carry a relatively small amount of fissionable material as fuel, and would be able to reach speeds of approximately 10% of the speed of light. Dr. Dana Andrews, AS&T Chief Technology Officer and Mini-Mag Orion inventor, and Roger Lenard from the Sandia National Laboratories, have published a paper describing their research into the Mini-Mag Orion (MMO) concept in the Acta Astronautica - Journal of the International Academy of Astronautics.

In the framework of their research into the subject, the scientists conducted an experiment that tested the process of compressing a simulated fissile material in a magnetic field. From a 2003 press release issued by Andrews Space, Inc.:

"The experiment validated the physical process behind the MMO concept, substantiating MMO's potential of enabling shorter interplanetary trip time for near-term space travel," said AS&T Principal Investigator Ralph Ewig. "We are still far from constructing an actual vehicle, but the present research will chart the course for human missions to other planets in the near future. The Mini-Mag Orion system shows significant promise, and the successful completion of our experiment demonstrated the physics and validated our approach for a near-term, in-space, advanced propulsion system," said Dr. Andrews. 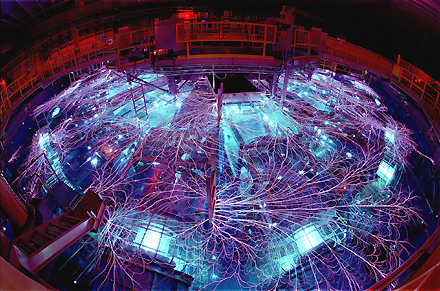 The interstellar version of Mini-Mag Orion couples highly efficient pulsed nuclear propulsion with beamed propulsion; that is, a pellet stream of fissionable particles beamed toward the spacecraft that continuously fuels the departing ship.  A Mini-Mag Orion vehicle could attain ten percent of light speed using the combination, according to Andrews and Lenard.  Deceleration of the vehicle at its destination would be accomplished via a magnetic sail, a large superconducting ring which uses intercepted charged particles to slow the spacecraft down.

Perhaps the most important aspect of the system is that it is another demonstration that the formidable distances of interstellar space can be conquered, using technologies which we already understand and could conceivably build within this century.

Stan Tackett holds undergraduate degrees in mathematics and computer science, and is currently pursuing a Master's degree in computer science with specializations in uses of artificial intelligence in the nuclear industry. His interests in nuclear engineering include nuclear propulsion for space travel, fusion, computational fluid dynamics and reactor physics. In his spare time he reads Piers Anthony as much as possible, and enjoys writing and editing crossover science fiction stories.

A quick note of congratulations to NASA's Mars Curiosity rover project team on the first anniversary of a daredevil landing on Mars on August 6, 2012....