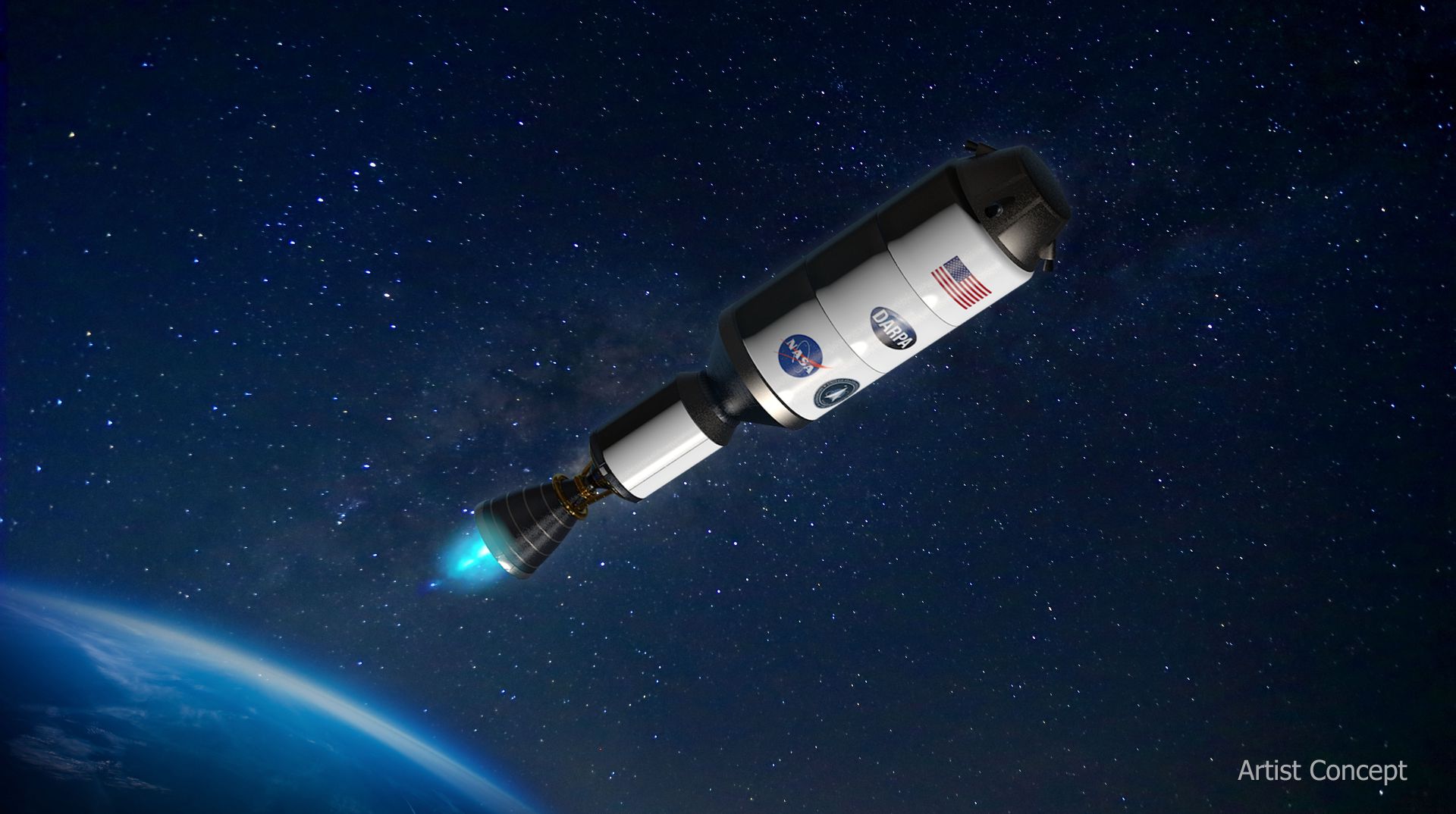 “NASA will work with our long-term partner, DARPA, to develop and demonstrate advanced nuclear thermal propulsion technology as soon as 2027. With the help of this new technology, astronauts could journey to and from deep space faster than ever—a major capability to prepare for crewed missions to Mars,” said NASA administrator Bill Nelson. “Our Moon to Mars Objectives are guiding our work, and we are now beginning to outline the architecture for future exploration. . . . One small step is one giant leap for humankind, and this partnership will take us one step closer as we dare to explore the unknown.”

Partnership agreement: DARPA and NASA announced they have signed a nonreimbursable agreement designed to benefit both agencies that outlines roles, responsibilities, and processes aimed at speeding up development efforts.

Under the agreement, NASA’s Space Technology Mission Directorate (STMD) “will lead technical development of the nuclear thermal engine to be integrated with DARPA’s experimental spacecraft,” while DARPA acts as the contracting authority for the development of the entire stage and the engine, which includes the reactor. DARPA will continue to lead the overall program, including rocket systems integration and procurement, approvals, scheduling, security, safety and liability, and overall assembly and integration of the engine with the spacecraft, according to the agencies.

What the DOD sees in DRACO: DRACO’s fission reactor will be fueled with high-assay low-enriched uranium (HALEU) to heat hydrogen and produce thrust with greater efficiency, given its energy-dense fuel and compact size, than would be possible with chemical rocket systems. The last U.S. testing of nuclear thermal rocket engines took place over 50 years ago and used high-enriched uranium. The switch to HALEU (enriched up to 20 percent U-235) means that research, development, and deployment of NTP systems will be more accessible to private companies.

“The bottom line is that we are a spacefaring nation,” DARPA director Stefanie Tompkins explained during a Q&A session hosted by the AIAA SciTech Forum, “and more and more part of a spacefaring planet, so operating in space is important to scientific discovery. It's increasingly more important to modern commerce, as well as to national security.”

DRACO’s phased approach: DARPA awarded the Track A Phase 1 contract to General Atomics–Electromagnetic Systems (GA-EMS) in April 2021 for the baseline design of a reactor and engine for a nuclear thermal propulsion. GA-EMS announced on November 7 that they had successfully tested key reactor components. Blue Origin and Lockheed Martin were selected to perform Track B Phase 1 work to develop the spacecraft that would carry the reactor and its hydrogen propellant.

Phase 2 is expected to take 24 months and include a complete preliminary and detailed design of the demonstration, as well as construction and experimental validation of the flight engine—including the nuclear reactor, nozzle, controllers, and associated equipment to drive the propellant from its tank and through the reactor. Phase 3 will immediately follow, with fabrication and testing of the rocket’s hydrogen tank. Ultimately, Phase 3 will include the launch and in-orbit demonstration of the NTP engine at full power and full thrust.

DARPA’s solicitation for Phase 2 and 3 proposals, which was not limited to Phase 1 awardees, was issued in May 2022 with an August deadline that was later extended to September 2. Tabitha Dodson, who works at DARPA and is DRACO program manager, told Nuclear News that Phase 2 and 3 contract announcements could be made as early as March 2023.

Shared goals: NASA is “undertaking some really important work as the nation's civil space agency engaged in peaceful exploration of space,” explained Col. Pamela Melroy, deputy administrator for NASA, during the SciTech Forum Q&A session. “We're always seeking opportunities to buy down risk and yet also advance the cutting edge of technology. So together NASA and DARPA have worked on multiple projects to support our respective missions that neither one of us could do alone.

“DRACO will be a critical part of evaluating the technologies that will take us deeper into the solar system,” Melroy added, asserting that “there's no ‘might’—we're going to Mars.”

Tompkins noted that NASA and DARPA were both created in the same year—1958—and for the same reason: “very much in response to the launch of the Sputnik satellite, which presented a pretty amazing technical achievement, but also a great surprise to the United States. . . . DARPA has held steady to the mission that started way back at the beginning, which was to both prevent that type of technological surprise and to create it ourselves.”

Since the 1950s, Tompkins said, “DARPA and NASA have a long history of fruitful collaboration in advancing technologies for our respective goals, from the Saturn V rocket that took humans to the moon for the first time to robotic servicing and refueling of satellites.”

Why nuclear now? Melroy explained that several factors have led to the nation’s new investment in NTP, including Space Policy Directive-6, released in December 2020 by the Trump administration, and the shift to using HALEU fuel. She also remarked that nuclear technology has overcome a “cultural barrier.”

“As you look at the clean energy transition, people are more sophisticated and understand that nuclear power is one tool in the toolkit for us to be considering, and so I think there's . . . broader acceptance that nuclear power has a place here on Earth as a part of our energy portfolio. And that's actually important to perceptions.”

What DRACO is not: DRACO is one critical component at the forefront of a broader resurgence of interest in nuclear thermal propulsion and nuclear power applications in space.

Separately, NASA, the Department of Energy, and industry are working on other initiatives to enable space exploration. Through NASA’s Fission Surface Power project, the DOE awarded three commercial design efforts to develop nuclear power plant concepts that could be used on the surface of the moon and, later, on Mars. NASA and the DOE are also collaborating on an effort to advance higher-temperature fission fuels and reactor designs as part of a nuclear thermal propulsion engine. According to the January 24 announcement from NASA and DARPA, “These design efforts are still under development to support a longer-range goal for increased engine performance and will not be used for the DRACO engine.”