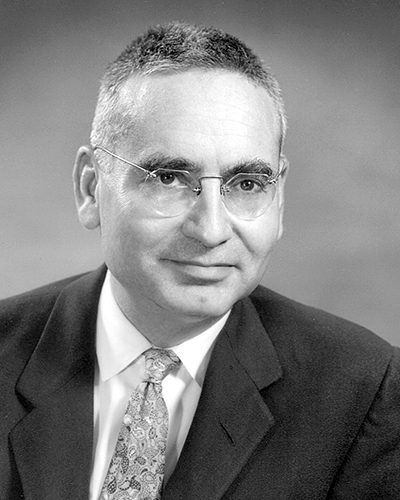 Dr. Alvin Weinberg was one of the founders of the American Nuclear Society (ANS), and the 5th president of the Society.

Three years after receiving his doctorate in 1939, Dr.Weinberg joined the University of Chicago group that developed the first nuclear chain reactor, and he helped produce the plutonium used for the bomb dropped on Nagasaki, Japan.

Dr. Weinberg was the one who suggested to Admiral Hyman Rickover that the Nautilus submarine be powered by a pressurized water reactor, which ultimately led to the nuclear Navy and the development of commercial nuclear power plants.

He co-wrote, with Nobel laureate Eugene Wigner, “The Physical Theory of Nuclear Chain Reactors,” a standard text in the field. He also wrote two memoirs, “The First Nuclear Era: The Life and Times of a Nuclear Fixer” and “Reflections on Big Science.” He was a member of the National Academy of Sciences and President Dwight D. Eisenhower’s Science Advisory Committee, and in 1961, of President Kennedy’s Panel of Science Information, which issued a report, “Science, Government and Information” (also called the Weinberg Report) that emphasized the need to communicate scientific information to the general public.

After leaving the Oak Ridge National Laboratory in 1973, he started Oak Ridge Associated University’s Institute for Energy Analysis, which he directed from 1975 to 1985. IEA was the first organization to receive significant funding from the Department of Energy for climate studies. In 1974, he was named director of the U.S. Office of Energy Research and Development to help address the energy crisis. This led to the creation of a solar energy institute, now known as the National Renewable Energy Laboratory. Dr. Weinberg also chaired a federal commission that in 1977 recommended spending $100 million in the next decade to pinpoint the causes and effects of rising amounts of carbon dioxide in the atmosphere. ANS awards a Weinberg Medal “for contributions to the understanding of the social implications of nuclear technology.”

Dr. Weinberg received his bachelor’s, master’s and doctoral degrees all in physics from the University of Chicago.