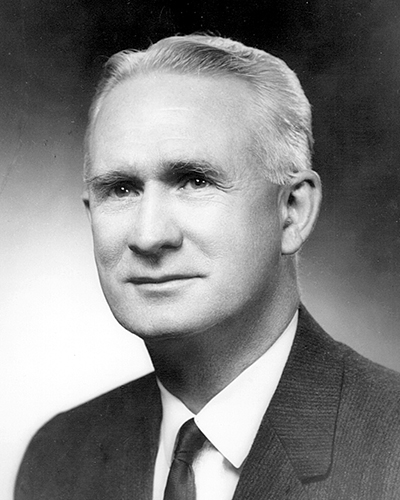 In 1955, Walter Zinn became the first president of the American Nuclear Society. He was a Fellow of the Society.

Zinn graduated from Queen’s in 1927 with a B.A. degree in mathematics and remained there until he earned an M.A. degree in 1930. In 1957 Queen’s awarded him an honorary D.Sc. degree. In 1930 Walter became a graduate student in physics at Columbia University. Walter became a naturalized U.S. citizen in 1938.

Walter held teaching positions at Queen’s during 1927-1928 and at Columbia during 1931-1932 and was on the faculty of City College of New York from 1932 to 1941. He also had a research laboratory at Columbia, where in 1939 he participated in the early work on the fissioning of uranium and the possibility of a chain reaction. He initially worked at Columbia for Enrico Fermi constructing experimental uranium lattices.

In early 1942, with the U.S. at war, some of the Manhattan Projects efforts were concentrated in the Metallurgical Laboratory at the University of Chicago. Zinn helped design and build several experimental facilities under the stands of Stagg Field. By December 1942, he had completed the construction of what became known as Chicago Pile 1 (CP-1), which achieved criticality on December 2, 1942, thus demonstrating the feasibility of achieving a sustained chain reaction. Zinn went on to construct CP-2 and CP-3 at what was then called Site A (which later became Argonne National Laboratory), and when Fermi moved to the Hanford Site, Zinn was left in charge of Site A.

In July 1946, Argonne National Laboratory was officially inaugurated, with Zinn as its first director. Under Zinn’s leadership, Argonne initiated a fast breeder reactor program. This led to the construction of the Experimental Breeder Reactor I (EBR-I) in Arco, Idaho (at that time, operated by Argonne), which was the first reactor in the U.S. to produce electricity. He also supervised the BORAX experiments demonstrating that boiling water reactors would be able to shut down safely under accident conditions. Under Zinn, Argonne implemented more progressive hiring practices than other laboratories at the time, employing both women and African-Americans in professional positions, and even to positions of authority.

After leaving Argonne in 1956, Zinn moved to Florida, where he founded his own consulting firm, General Nuclear Engineering. The company was involved in the design and construction of pressurized water reactors. It was acquired by Combustion Engineering in 1964, and he became a vice president and head of its nuclear division. He stepped down from this position in 1970, but remained a board member until 1986. He also as a member of the President’s Science Advisory Committee from 1960 to 1962, and a member of the General Advisory Committee of the AEC and its successor, the Energy Research and Development Administration, from 1972 to 1975.

Zinn received multiple awards and recognition for his work, including a special commendation from the AEC in 1956, the Atoms for Peace Award in 1960, the Enrico Fermi Award in 1969, and the Elliott Cresson Medal from the Franklin Institute in 1970.