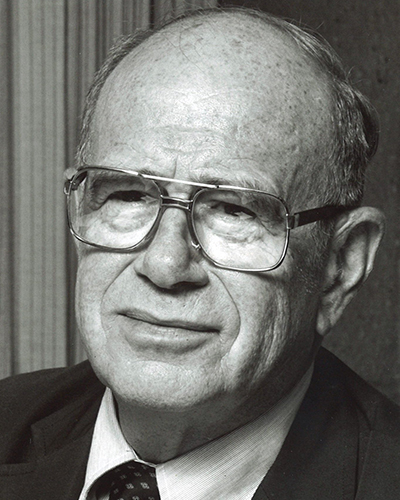 Dr. Walter Loewenstein was the 35th president of the American Nuclear Society. He became a member of the Society in 1955, at that time joining the Mathematics & Computation and Nuclear Installations Safety Divisions. He remained with these Divisions until his death. In 1973, he became a Fellow of ANS. In 1985, he was elected to the Board of Directors, assigned to the Finance Committee.

Dr. Loewenstein was born in 1926 in Gunsengen, Hesse, Germany. His family emigrated to the U.S. when he was a child in 1938, originally settling in Tacoma, Washington.

In 1945 at the age of 19, he was drafted to the U.S. Navy while he had been attending the College of Puget Sound. After bootcamp, he was sent to Chicago for electronics training and was stationed at Navy Pier. He was released from the Navy about one year after the end of the war and returned to college to pursue his education. He graduated in 1949 from University of Puget Sound with a degree in mathematics and physics. He earned his Ph.D. from Ohio State in 1954 in chemical physics.

Fascinated with the growth in nuclear technology at Argonne National Laboratory (ANL), he became a part of their fast reactor physics team. He specifically was part of the Fast Critical Facility, a.k.a Zero Power Reactor III (ZPRIII). He traveled extensively in the 1950s between Chicago and Idaho working on the project.

In 1958, Loewenstein’s work at ANL switched from the general fast reactor to the core design for the small Experimental Breeder Reactor II (EBR-II). The team designed and produced a reactor without plans, but solely relied on their ingenuity and knowledge. Eventually he was moved to Scotland to assist with their reactors in 1959, but was brought back to ANL in the U.S. in 1961. He remained with ANL working on the EBR-II until his departure in 1973.

After leaving ANL, he began working with Electric Power Research Institute (EPRI). An opportunity had presented itself to Dr. Loewenstein, and he was appointed the director of Safety Technology Department with the Nuclear Power Division. He was promoted ten years later to the deputy director of the Nuclear Powers Division where he remained until his retirement.

Dr. Loewenstein served on the Board of Directors for several international cooperative research projects. He is the author of over 40 publications and holds three nuclear reactor patents. In 1978, Dr. Loewenstein was one of the participants in the “Risk Assessment Review Group Report” to the U.S. Nuclear Regulatory Commission.

Read Nuclear News from July 1989 for more on Walter.