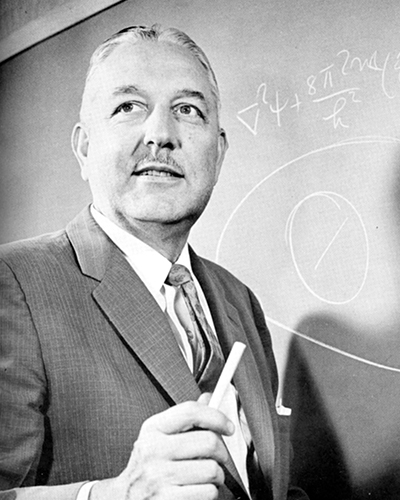 Dr. William Earl Shoupp was elected the 10th president of the American Nuclear Society (ANS). He was a Fellow of ANS.

Shortly after joining Westinghouse, he directed work on the world’s first industrial atom smasher at Westinghouse. In 1943, he was placed in charge of the company’s nuclear physics and electronics research. Dr. Shoupp was co-discoverer of photo fission, the splitting of uranium atoms by high speed gamma rays. When Westinghouse formed an atomic power division in 1949, Dr. Shoupp became one of the original members of that division staff. He later served as assistant atomic power division manager in charge of development, and subsequently, as technical director of the company’s commercial atomic power organization, and technical director of the Astronuclear Lab.

After World War II, he was instrumental in persuading the Navy and the Atomic Energy Commission that nuclear energy should be used to power submarines, from which came the first submarine reactor that powered the USS Nautilus. He was also in charge of R&D for several nuclear plants, including Shippingport and Yankee-Rowe. Following his retirement in 1973, in addition to serving as a consultant to Westinghouse, Dr. Shoupp also consulted for the Office of Coal Research, the Electric Power Research Institute, and other organizations.

He was a member and Fellow of the American Physical Society, IEEE and ASME. He was elected to the National Academy of Engineering in 1967, and subsequently served as Vice President of the Academy (1973-1978) and Acting President (1974-1975). He also served on many government advisory committees. He received many awards throughout his career, including the Westinghouse Order of Merit in 1953 for outstanding development work on the Nautilus, and the Industrial Research Institute Medal in 1973, and was awarded 9 patents.