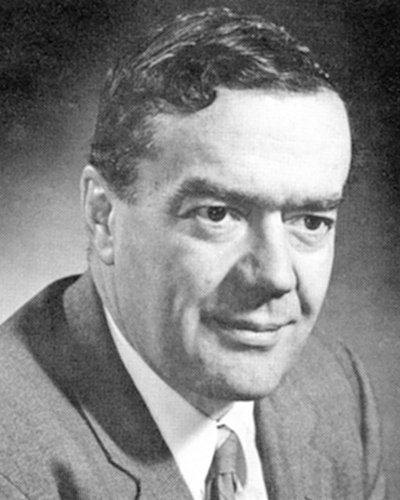 Dr. Wilfrid Bennett Lewis was the 7th president of the American Nuclear Society and a charter member.

He was a key figure in the development of nuclear power in Canada for nearly three decades, from the end of World War II until his retirement in 1973.

Born in England in 1908, Dr. Lewis earned a doctorate at Cavendish Laboratory at the University of Cambridge in 1934 and continued his research on nuclear physics there until 1939. While there, he worked on alpha radioactivity with Lord Rutherford. He also worked on nuclear disintegration by particles accelerated by high voltage and on the construction and operation of the Cambridge cyclotron.

During the war, Dr. Lewis was on load to the British Air Ministry, where he worked on the development of radar. At the end of the war, he became chief superintendent of the Telecommunications Research Establishment at Malvern.

A year later, he agreed to head Canada’s fledgling nuclear research facility at Chalk River, Ontario, where he worked for the next twenty-seven years. Dr. Lewis initially served as Director, Division of Atomic Energy Research, under the National Research Council of Canada. In 1952, upon the formation of Atomic Energy of Canada, he became Vice-President, Research and Development. In 1963, he was appointed Senior Vice President (Science) of Atomic Energy of Canada Limited (AECL). He eventually retired from AECL in 1973, and was then appointed Distinguished Professor of Science, Queen’s University.

Convinced that nuclear energy could be used economically for generating electricity, Lewis fostered a collaboration between (AECL) and Ontario Hydro that led to the development of the CANDU reactor, considered his greatest technical achievement.

Dr. Lewis received his B.A. from Haileybury College in England in 1926. In 1934, he received both an M.S. and Ph.D. from Cambridge University in Physics.

The W. Bennett Lewis Award was established by the Decommissioning & Environmental Sciences Division of the American Nuclear Society in honor of Dr. Lewis.