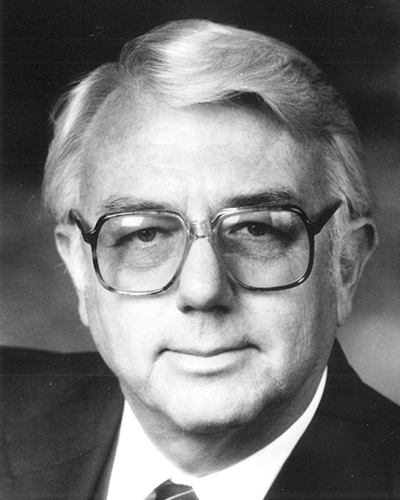 Ronald Stinson was the 33rd president of the American Nuclear Society (ANS). He joined the Society in 1962 at the same time joining the Operations and Power Division. He was an ANS Fellow, the highest grade of membership of the Society.

Born and raised in Fort Worth, Texas, he graduated from Texas A&M in 1953 with a B.S. in range management before joining the Army. He and his wife moved to Darmstadt, Germany, where he was stationed. He applied for early release from the service, but was denied because his nuclear training and knowledge were in demand.

After his army commitment was met, he returned to Texas A&M, just as they were just introducing a nuclear program. He earned an M.S. in nuclear engineering in 1961, becoming one of the first two graduates to hold such a degree.

Stinson moved to Hanford, Washington landing a position working on the big eight reactors of the Hanford Project, which was run by General Electric (G.E.). Eventually he was transferred to the Vallecitos Lab in the San Francisco East Bay area as manager of nuclear safety. While at Vallecitos he spent much of his time occupied with the Nuclear Regulatory Commission (NRC).

Later he took a promotion as project engineer of Dresden 2 & 3 and Quad Cities Nuclear Plants, and he was later recruited by Sacramento Municipal Utility District (SMUD) in Herald, California to staff and build the Rancho Seco Nuclear Plant.

He left SMUD and became the director of projects at General Atomic (G.A.), but shortly after G.A. pulled out of the nuclear industry completely. Stinson and three of his industry colleagues formed a successful consulting business, Manage Analysis Company.

Read Nuclear News from July 1987 for more on Ronald.