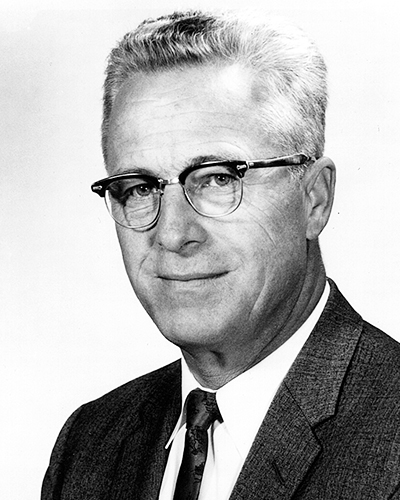 Raemer Edgar Schreiber (“Schreib”) was the 13th President of the American Nuclear Society (ANS) and a Fellow of the Society. He served on the ANS Board of Directors from 1962-1965 and again from 1966-1969.

In 1944, he began his career working on the water boiler reactor at Los Alamos Laboratory. It was the first reactor to use enriched uranium. By April of 1945, he became a member of the pit assembly team for the Trinity Test. He was at Base Camp at the time of the actual explosion on July 16, 1945. Following Trinity, Dr. Schreiber escorted the plutonium core of the Fat Man device to Tinian Island, where he helped to assemble the Nagasaki bomb.

Post war, Dr. Schreiber was part of a group that was viewing a critical assembly experiment that went wrong. He and the others were exposed to ionizing radiation, killing one of the men present. This resulted in Dr. Schreiber becoming a leader in the development of remote handling.

In 1947 he began working as a leader in the W Division of Los Alamos. This Division played a key role in developing the world’s first hydrogen bomb. Ultimately, he became the deputy director of Los Alamos in 1972. In 1955 Schreiber became the leader of the Nuclear Rocket Propulsion (N) Division. The primary responsibility of N Division was the Rover program that developed rockets based on reactors that would power long, interplanetary missions not able to be carried out by conventional rocket-propulsion technology. In this capacity, he met John F. Kennedy during the President’s 1962 visit to Los Alamos. That same year he became technical associate director of the Laboratory and deputy director in 1972.

Dr. Schreiber retired in 1975 and continued to serve as an unpaid consultant to Los Alamos until 1995.

During his retirement years in the late 1980s, he was a member of the Laboratory’s History Advisory Council, which assisted in the publication of Critical Assembly: A Technical History of Los Alamos during the Oppenheimer Years, 1943-1945. In 1994-1995, he assisted the Human Studies Project Team in reviewing the history of medical studies at the Laboratory.

Among his many career honors and awards were an honorary doctorate of science from Purdue University (1964). He was also a joint recipient of the Schreiber-Spence Award from the Institute of Nuclear Space Propulsion (1988). He was a Fellow of the American Physical Society, as well as of ANS.

Dr. Schreiber graduated Linfield College with a B.A.in 1931, earned his M.A. from University of Oregon in 1932, and Ph.D. from Purdue in 1941. All degrees were in physics and mathematics.

Postmortem, Los Alamos has named a conference room the “Raemer E. Schreiber” in honor of his many contributions to nuclear criticality research.