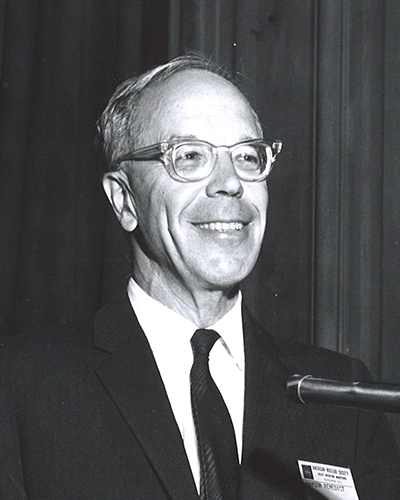 Dr. Manson Benedict was the 8th president of the American Nuclear Society (ANS).In 1957, Dr. Benedict was elevated to the status of a Fellow of ANS. In 1969, he received the Arthur Holly Compton Award in Education and in 1979 the Henry DeWolf Smyth Nuclear Statesman Award. He was the 1985 recipient of the ANS Seaborg Medal.

He was known for his pioneering role in nuclear engineering. He developed the gaseous diffusion method for separating the isotopes of uranium and supervised the engineering and process development of the K-25 plant in Oak Ridge, Tenn., where fissionable material for the atomic bomb was produced.

From 1958 to 1968, Dr. Benedict was a member and chair of the Advisory Committee of the Atomic Energy Commission, appointed by Presidents Eisenhower and Kennedy.

He received many awards for his work on the Manhattan Project during World War II, and for his later career as a scientist, educator, and public servant, which focused on nuclear power and other peaceful uses of atomic energy. These included the William H. Walker award in 1947, the Perkin Research Medal in 1966, the Robert E. Wilson Award in 1968, the Enrico Fermi Award in 1972, and the National Medal of Science from President Gerald Ford in 1975. The Wilson Award citation said of Dr. Benedict, “He has served education, industry and government with quiet and unwavering dedication.” In recognition of his contributions, the Manson Benedict Fellowship fund was established in the MIT Nuclear Engineering Department in 1983.