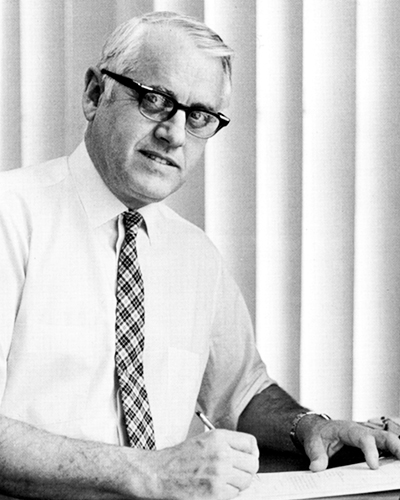 Louis H. Roddis was the 15th President of the American Nuclear Society (ANS) and a Fellow of ANS.

Roddis graduated from the U.S. Naval Academy in 1939, having attained a standing of number one in his class in each of his four years there. Following his graduation, he was assigned to sea duty for three years, and was in Pearl Harbor during the Japanese bombing on December 7, 1941, where he and others helped to rescue some of the crewman from the Oklahoma. In 1942, the Navy sent him to MIT, where he received a master’s degree in naval architecture and marine engineering.

After finishing his degree, Roddis served on Joint Task force I, which was responsible for the atomic weapons tests in the Bikini Atoll, and then was assigned to the first training course on power reactors at Clinton Laboratories of the Manhattan Engineer District (later, Oak Ridge National Laboratory). His classmates included Hyman Rickover, under whom he later served during the design and construction of the nuclear submarines Nautilus and Sea Wolf. He also played a major role in the development of the first major nuclear power plant in the U.S. at Shippingport, Pennsylvania.

In 1955, Roddis resigned from the Navy to become deputy director of the Reactor Development Division of the Atomic Energy Commission, where he was responsible for both naval and civilian reactor programs. He left the AEC in 1958 to become president of Pennsylvania Electric Company, a subsidiary of General Public Utilities Corporation (GPU). In this position, he was responsible for the construction of the world’s first 500-kV transmission line, for which the company received the Edison Award of the Edison Electric Institute in 1962. In 1967, he became chairman of the board of Pennsylvania Electric Company and director of GPU nuclear activities, where he was responsible for the development of several nuclear power plants. Following that, in 1969, he became vice-chairman of the Board of Trustees of Consolidated Edison.

He served in that capacity until 1973, after which he became president and CEO of John J. McMullen Associates, a naval architecture and marine engineering firm. He left that position in 1976 and spent the remainder of his professional career as a member of a number of corporate boards and a private energy consultant. His clients included a number of U.S. national laboratories, government agencies, and major corporations.

Roddis was the first utility executive to serve as president of the ANS, and in addition to have served as president of the Atomic Industrial Forum (1962-64). Over the course of his career, he received recognition from many sources. In addition to being a Fellow of the ANS, he was a Fellow of the AAAS, the Royal Institute of Naval Architects, and ASME. In 1957, he received the AEC’s Outstanding Service Award; in 1958, the Arthur S. Fleming Award for outstanding government service in the scientific field; and in 1984, the Department of Energy’s Exceptional Service Award. He was elected to the National Academy of Engineering in 1967.