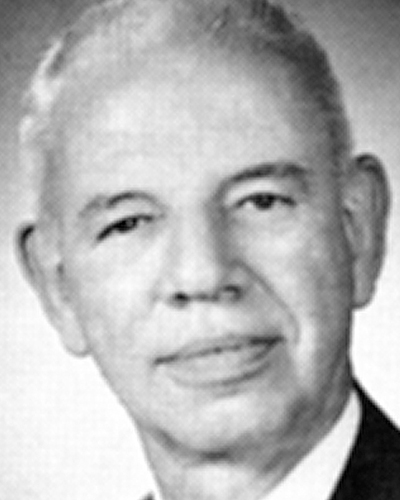 Dr. Leland J. Haworth was the 3rd president of the American Nuclear Society and a charter member of the Society.

Dr. Haworth started his work career teaching high school and working on his father’s farm for two years. He eventually returned to school earning a scholarship to attend the University of Wisconsin to pursue a doctorate, which he received in 1931.

After World War II began, Dr. Haworth returned to MIT to participate in wartime research at the MIT Radiation Laboratory, developing new radar systems. He was a member of the steering committee and helped to manage the laboratory. He also wrote large sections of the Radiation Laboratory Series, a highly regarded technical work.

When Brookhaven National Laboratory was formed in 1948, he moved there as assistant director for special projects. The following year, he assumed the role of director and served in that position until 1961. While there, he helped with the construction of many experimental facilities.

In 1961, he was appointed by President Kennedy as a Commissioner of the Atomic Energy Commission. In this role, he headed the research efforts of the AEC. He supported a ban on atmospheric nuclear testing, helped develop the Limited Test Ban Treaty, and worked on Operation Plowshare, an effort to use nuclear bombs in large-scale excavation projects. In 1962, Dr. Haworth wrote Civilian Nuclear Power–A Report to the President–1962, an influential public policy paper.

In 1963, President Kennedy appointed Dr. Haworth to head the National Science Foundation, where he worked on a number of large-scale scientific projects, and helped draft a major NSF reorganization bill. When he term ended in 1969, Dr. Haworth returned to Long Island, where he worked part-time for the president of Associated Universities, Inc., a position he held until 1975, and was special consultant to the director of Brookhaven.

Dr. Haworth earned a master’s degree in physics from Indiana University in 1927.