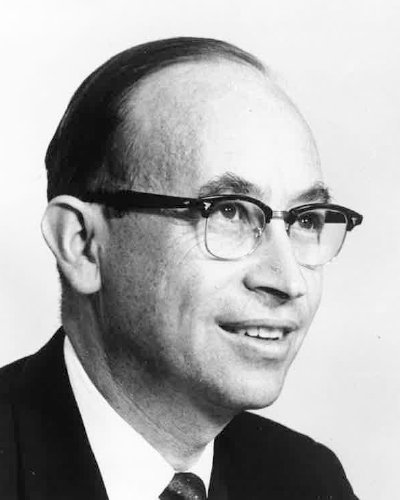 Karl Paley Cohen was a pioneer in the nuclear industry and a charter member of the American Nuclear Society (ANS). He was the 14th president of ANS, as well as a Fellow of ANS.

Beginning in 1937, Cohen served as a research assistant to Professor Harold Urey, who had earned the 1934 Nobel Prize in Chemistry for his work on isotopes. As the war escalated, Urey was named director of the Manhattan Project at Columbia, and in 1940, Cohen was hired as head of the project’s Theoretical Division, with the responsibility for determining processes for U-235 (uranium) isotope separation. Many accounts of the Manhattan Project highlight this work in particular. Subsequently, Cohen was deeply involved with perfecting the gaseous diffusion and centrifuge techniques for enrichment, and uranium sources and production would be a major focus of his career.

From 1944 to 1948, he was a physicist and advisor on nuclear energy matters to the Standard Oil Development Company, and form 1948 to 1952, was technical director at the H. K. Ferguson Company, which constructed the Brookhaven reactor. He founded Walter Kidde Nuclear Laboratories in 1952, serving as vice president for over three years.

Cohen joined General Electric Company in 1955 as a consulting engineer and held a variety of positions of increasing importance there. He established GE’s Reactor Safety Committee and chaired the group for eight years. He became GE’s chief scientist in 1973 and retired from GE in 1978.

He also served as a consultant to the Atomic Energy Commission and other government agencies. In addition to being a member of ANS, he was a member of the American Physical Society. He was elected to the National Academy of Engineering and received a number of other awards including the 1977 Krupp Prize for Energy Research and a Chemical Pioneer Award from the American Institute of Chemists in 1979. In 2008, he was named one of the 50 chemical engineers of the “Foundation Age” by the American Institute of Chemical Engineers.

Cohen studied at Columbia University from 1929 to 1936, earning a doctorate in chemistry in 1936, and followed that with post-doctoral work in Paris.