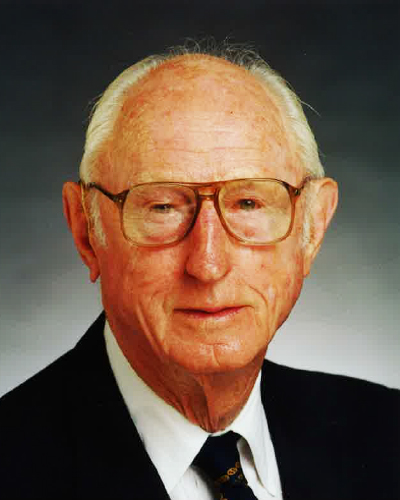 John W. Simpson was elected the 19th president of the American Nuclear Society (ANS). Simpson was a charter member of the Society and elevated to Fellow of ANS in 1958.

He was top executive and engineer for the Westinghouse Electric Corporation who played a major role in developing the nation’s first commercial nuclear power plant and its first nuclear-powered submarine, the U.S.S. Nautilus.

John joined the Marines in 1933. Just as he was completing basic training, his application to attend the United States Naval Academy was accepted. He graduated from Annapolis in 1937. But in his last year at the academy, he developed near-sightedness and was denied a commission. Instead, he went to work as a junior engineer at the Westinghouse switchboard division in East Pittsburgh, Pa. There he met Rickover, the Navy’s contract officer on the switchboard project. At the same time, he pursued a master’s degree in electrical engineering at the University of Pittsburgh. He received the degree in 1941.

In 1946, he took a two-year leave of absence to work at the Oak Ridge National Laboratory. There, with Rickover and a group of engineers and scientists, he helped draft plans for the first attempt at applying nuclear energy to the generation of electricity. He returned to Westinghouse in 1949 and was named assistant manager of engineering at the Bettis Atomic Power Laboratory in Pittsburgh. There, in addition to working on the Nautilus with Rickover, he helped design propulsion plants for the U.S.S. Long Beach and the U.S.S. Enterprise, the nation’s first nuclear surface ships, and for the U.S.S. George Washington, the first nuclear submarine that carried Polaris missiles.

In 1951, Westinghouse received a contract from the federal Atomic Energy Commission to build the first atomic electricity-generating plant, at Shippingport, Pa., and John became manager of the project. In the late 1950s, he organized the company’s astro-nuclear laboratory, which won the federal government’s first contract to develop a nuclear reactor for rocket propulsion. It was successfully tested, but funding was later diverted for other activities.

John was president of the Westinghouse Electric Power Systems Company from 1969 to 1977. He was awarded the Edison Medal of the Institute of Electrical and Electronics Engineers in 1971 for his contributions to electricity generation and naval and space propulsion. His citation reads: “The extent to which he influenced the transition from scientific discovery to practical application in all three areas is to a substantial degree responsible for the eminence of the United States in the atomic energy field today.”

Read Nuclear News from July 1969 for more on John Simpson.