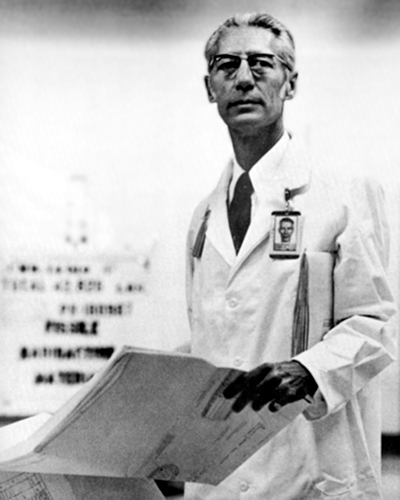 Lilienthal started his career in 1940, doing acceptance tests and designing servosystems for gyrocompasses and associated fire control equipment for Sperry Gyroscope Company. During the war, he became assistant product engineer for development and production of an airborne gyroscopically stabilized radar system for B29s.

In early 1947, he moved to Los Alamos Scientific Laboratory (now Los Alamos National Laboratory), where he initially headed the Special Problems Group of the Chemistry Metallurgy Research (CMR) Division. There, he worked on the design and construction of the first hot cell laboratory at LASL. This in turn led him, in 1948, to help establish a Hot Laboratory Committee with several others. Among them was Mel Feldman, who would later become ANS president (1975-6). The Hot Laboratory Committee merged with ANS in 1958 and is now the Remote Systems Technology Division.

In 1950, Lilienthal became group leader of the Instrumentation and Engineering Group. In that capacity, he designed and handled the instrumentation for the first thermonuclear weapons test codename “Mike,” which took place at Eniwetok in the South Pacific in 1952. He worked on Eniwetok for six weeks as part of a project known as “Operation Ivy.”

Back at LASL, he worked on the design and construction of the CMR Materials Sciences Building in the early 1950s. Later, he worked on another hot cell complex for examining irradiated uranium fuel and irradiated plutonium. In 1967, he was also named assistant division leader of the CMR Division (which later became 2 divisions—the Chemistry-Materials Science Division and the Chemistry-Nuclear Chemistry Division—with him as assistant division leader of both).

He retired from Los Alamos National Laboratory in 1977.

Read Nuclear News from July 1972 for more on Jim Lilienthal.