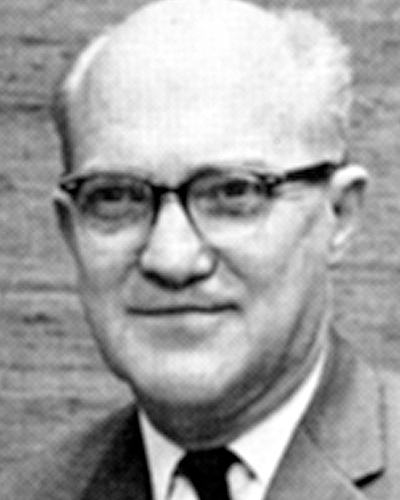 C. Rogers McCullough was the 2nd president of the American Nuclear Society, where he was also made a Fellow. He was a founding member of ANS’ Standards Committee.

In 1946, Dr. McCullough became director of the Power Pile Division of Clinton Laboratories of the Manhattan Engineer District (now Oak Ridge National Laboratories). The task of this division was to develop and build an experimental reactor using the reactor concept known as the Daniels Pile. This effort was terminated in 1947.

Subsequently, Dr. McCullough worked in chemistry and nuclear engineering at Monsanto Chemical Company. During his time at Monsanto, he served on several committees of the Atomic Energy Commission. He served first as chair of the Industrial Committee on Reactor Locations Problems (in 1951). In 1953, that committee merged with another AEC committee and became the Advisory Committee on Reactor Safeguards, which he also chaired. He served as chair of the ACRS until 1960, and continued on as a member until 1961. In 1956, Monsanto placed him on a leave of absence to work full time for AEC as deputy director for hazards evaluation. He held that position concurrently with the ACRS position until mid-1957.

He later became a consultant in chemical and nuclear engineering and served as Technical Director of Southern Nuclear Engineering, Inc., a company offering professional engineering services to nuclear and affiliated industries. Among his consulting assignments, in 1966 he consulted for Consolidated Edison on the Indian Point 2 Nuclear Power Plant, and later, on Indian Point 3.

He received a bachelor’s degree from Swarthmore College in 1921, and master’s and doctorate degrees in chemistry from MIT in 1922 and 1928, respectively.