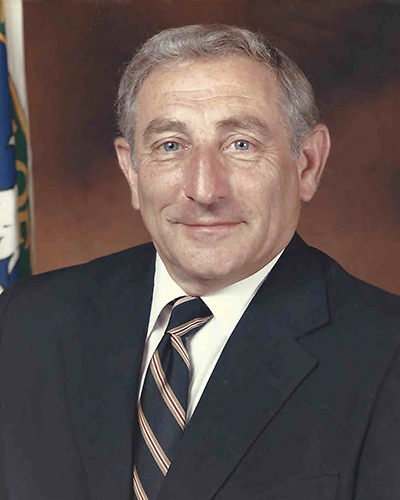 Dr. A. David Rossin has been a member since of the American Nuclear Society since 1955, and is an ANS Fellow, the highest membership grade of the Society.

His diverse career in the nuclear industry ranged from working with national laboratories and universities on nuclear and advanced energy technology, non-proliferation, radioactive waste management and low-level radiation issues, to energy policy issues when he was appointed by President Reagan as Assistant Secretary for Nuclear Energy, for the U.S. DOE from 1986-1987.

After his departure from the DOE in 1987, Dr. Rossin started a consulting firm, Rossin and Associates in Los Alto Hills, CA. He consulted with Lawrence Livermore, Sandia, and Los Alamos National Laboratories, and was a member and chair of the Diablo Canyon Independent Safety Review Committee from 1999 until 2002.

From 1996 until 2003, Dr. Rossin was a Center Affiliated Scholar at the Center for International Security and Cooperation at Stanford University. His research focused on the people and events which led up to the U.S. policy decision in 1977 to abandon reprocessing of spent nuclear reactor fuel. The thinking, writing, political judgments, tactical decisions and internal negotiations which led up to the policy itself were critical in defining its form, how it was implemented and the legislation that followed it.

Throughout his career he was able to interview several hundred individuals who were personally involved with President Ford and President Carter. His interviews also included many active critics of nuclear power, some of whom claimed personal influence on the critical decisions in 1976 and 1977.

Dr. Rossin was Director of the Nuclear Safety Analysis Center (NSAC) at EPRI 1981-86. From 1972 to 1981, he was with the Commonwealth Edison Company, where he was Director of Research and chaired the company’s Nuclear Waste Task Force. In 1982 he was voted Electric Industry Man of the Year, for his efforts to improve public understanding of nuclear, energy and environmental issues.

He was a visiting scientist in Nuclear Engineering at the University of California, Berkeley (1988-91), and taught a graduate level course on the nuclear fuel cycle. He and Professor T. Kenneth Fowler published a book titled Conversations on Electricity and the Future - Findings of an International Seminar and Lessons from a Year of Surprises, University of California PS, Berkeley (June 1991).

At Argonne National Laboratory (1955-1972) he served on the Laboratory’s Safety Review Committee and was its Chair for two years. His scientific research focused on predictions of embrittlement of nuclear reactor pressure vessel steel, and he published papers that continue to be referenced in lifetime assessments for commercial nuclear power plants.

A native of Cleveland, Ohio, Dr. Rossin received his B.S. in engineering physics from Cornell University in 1954; an M.S. degree in nuclear engineering from the Massachusetts Institute of Technology (MIT) in 1955; a Master’s in Business Administration from Northwestern University in 1963; and a Ph. D. in metallurgy from Case Institute of Technology (now Case Western Reserve University) in 1966.

Read Nuclear News from July 1992 for more on David.