A popular event for the exchange of ideas, the annual meeting was by many accounts the largest gathering of personnel involved in nuclear training. It continued in Gatlinburg until 1998 when the event moved to the Peabody Orlando and renamed the Conference on Nuclear Training and Education (CONTE). Three years later in 2001, the conference changed to a biannual gathering in Orlando and ran as such until 2007. That year (2007), big changes happened with CONTE as it merged with the American Nuclear Society (ANS), was folded into the Education, Training, Workforce Development Division (ETWDD) and began holding its meetings in Jacksonville, Fla. This highly informative and educational gathering continued to meet biannually during the month of February in Jacksonville, Fla. until 2017. Following the 2017 meeting, board members, acting on input from participants, decided to move the venue to nearby St. Augustine, Fla.

In 2019, The Conference on Nuclear Training and Education: A Biennial International Forum, will be held at World Golf Village, Renaissance St. Augustine Resort in St. Augustine, Fla., February 5-7, 2019. As always, the emphasis of this biennial international forum will be on the future of the nuclear industry and is aimed primarily at training, education and workforce development. At the upcoming meeting topics of interest will include issues involving personnel and operator training, human performance, cybersecurity, accreditation/international standards, leadership, simulator/ simulations, and much more.

Over the years CONTE, in its various forms, has continued to provide the industry with a cornucopia of information that participants have taken back to their respective plants to improve training. From its beginnings the event has had but one goal, to improve the safety of operations so that the likelihood of another Three Mile accident is lessened.

Registration for the conference is now open. We look forward to your participation.

The American Nuclear Society will host a special preview of its upcoming training and education conference this Thursday, January 19. The hourlong program on the ANS Conference on Nuclear... 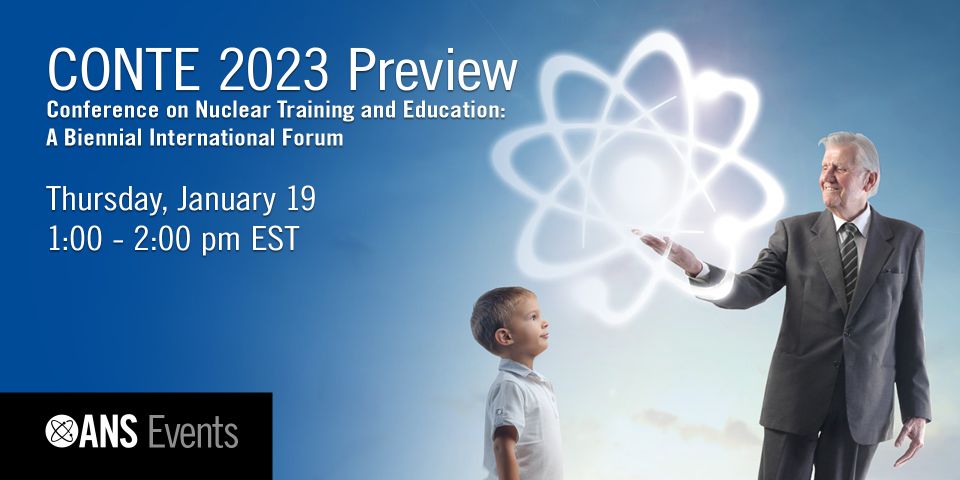