Vermont utilities have not written contracts to buy power from Vermont Yankee nuclear power plant, and that's the basic gap. In my opinion, Vermont utilities are betting that gas prices stay low for a very long time. I think this is a bet that the utilities (and Vermont) are going to lose.

Before we look at the arcane field of gas price prediction, however, let's look at..."The gap."

The old gap: Possibly a gap in supply

A Vermont Department of Public Service chart illustrated this situation, and in June 2011 I wrote Thoughts on a Chart for the ANS Nuclear Cafe. This chart shows a gap in Vermont's "Committed Electric Resources." The two factors-less power from Hydro Quebec and none from Vermont Yankee-opened up a lot of white space on the right side of the chart. This white space represented electricity that was needed, but not committed. 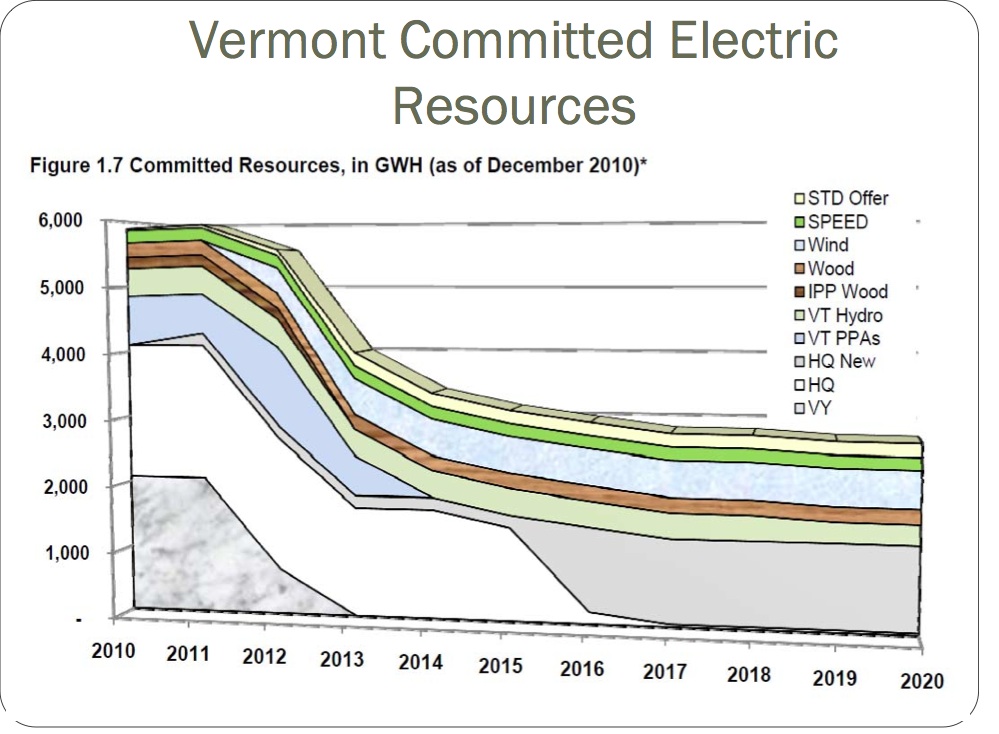 The new gap: A gap in contracts for power

In 2011, it looked like there might be an actual power supply gap. In 2012, with Vermont Yankee still operating, fears of a supply gap have receded. There's still a gap though. The new gap is all about contracts. It's a gap in "committed resources."

Guy Page from the industry group Vermont Energy Partnership (VTEP) wrote a white paper this summer about this committed resources gap. Entergy and many other businesses are members of VTEP.

Mr. Page borrowed Figure 3 of his white paper from Vermont Department of Public Service reports. It shows a gap of 31 percent "undetermined" power in 2016-for all Vermont utilities put together. The gap is about the same percentage of Vermont electricity as the electricity that formerly was purchased from Vermont Yankee. 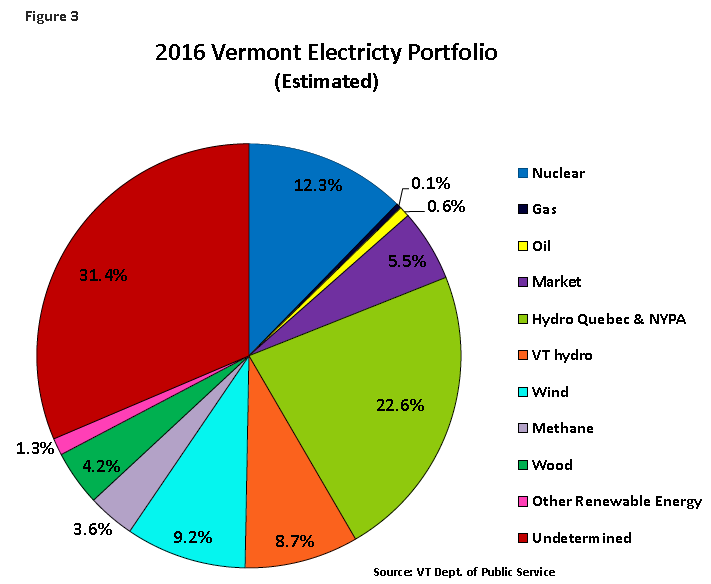 Vermont's largest utility, Green Mountain Power, has a very similar chart on its website. Its "Fuel Mix" page for 2011 and 2013 shows two pie charts. Nuclear power falls from 46 percent to 8 percent of the supply over the two years from 2011 to 2013. "Other" rises from 6 percent to 30 percent. That's the gap: 30 percent.

Views of the gap

Howard Shaffer and I recently attended a meeting where one of the speakers was Robert Dostis of Green Mountain Power. In his presentation, Mr. Dostis showed the Fuel Mix pie charts. He said that he was pleased with the gap in committed resources. He felt that the gap gives his utility the flexibility to obtain good electricity bargains.

Ahem. As I remember it, Mr. Dostis did not mention that Vermont utilities are currently filling that electricity gap with purchases from the grid. He also didn't mention that Vermont Yankee is probably selling most of its power to the grid. We could talk more about the power-plant-behind-the-curtain, but we will pay no further attention to it in this blog post.

Let us look at Mr. Dostis' claim that the committed-power gap gives his utility the ability to obtain inexpensive power. This may be true, but I wonder: For how long will power be inexpensive?

The new sources of shale gas caused prices to fall. Many analysts, however, expect gas prices will soon climb, because it is uneconomical to drill new shale wells at these low prices. At Forbes magazine, Richard Finger thinks we are well on our way to $8 gas.

Instead of further speculation on gas prices, I want to end with this chart from ISO New England. The chart shows the close connection between electricity and gas prices in New England, and gas price volatility. I think that if the Vermont utilities had signed a contract with Vermont Yankee, they might have been able to avoid some expensive surprises in the "gap area" of Vermont's power contracts. As a Vermont citizen and ratepayer, I wish the utilities had signed such a contract. 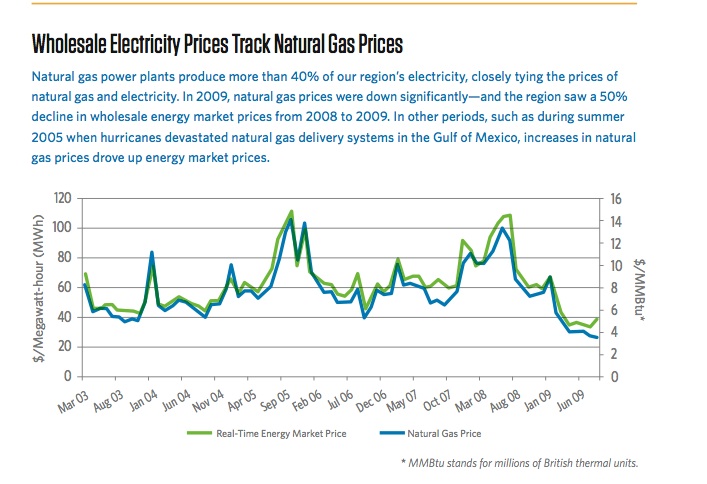 Maybe it is better, however, for Vermont Yankee itself that the utilities do not have a contract with the plant. As grid prices rise, Vermont Yankee profits could rise right along with them.

The actual contracts: If you look at the Hydro Quebec contracts, and most of the contracts Vermont Yankee proposed for the Vermont utilities, the power price moves with the market. In other words, I think that gas and electricity prices will rise, and I suspect that power generators such as Hydro Quebec and Vermont Yankee think so too. If I were Green Mountain Power, I wouldn't be so happy about the "opportunities" of the gap.

Using power and paying for power: Vermont is still using Vermont Yankee power, because Vermont power users are close to the plant. The difference between power supplies and power purchases is well described in Howard Shaffer's post on my blog: Where's the Magic Switch?

Meredith Angwin is the founder of Carnot Communications, which helps firms to communicate technical matters. She specialized in mineral chemistry as a graduate student at the University of Chicago. Later, she became a project manager in the geothermal group at the Electric Power Research Institute (EPRI). Then she moved to nuclear energy, becoming a project manager in the EPRI nuclear division. She is an inventor on several patents. Angwin formerly served as a commissioner in the Hartford Energy Commission, Hartford, Vt.  Angwin is a long-time member of the American Nuclear Society and coordinator of the Energy Education Project. She is a frequent contributor to the ANS Nuclear Cafe.