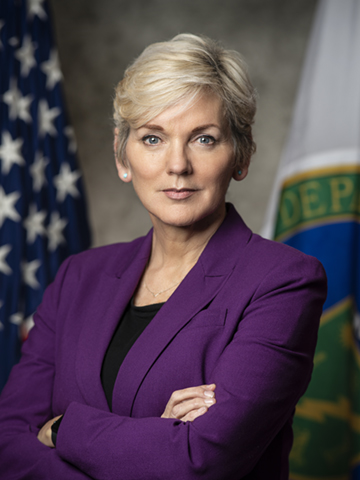 Secretary of the U.S. Department of Energy

Jennifer M. Granholm was sworn in as the 16th Secretary of Energy on February 25, 2021, becoming just the second woman to lead the U.S. Department of Energy (DOE).

Prior to her nomination as Secretary of Energy, Jennifer Granholm was the first woman elected Governor of Michigan, serving two terms from 2003 to 2011.

As Governor, Jennifer Granholm faced economic downturns caused by the Great Recession and meltdown in the automotive and manufacturing sectors. She successfully led efforts to diversify the state’s economy, strengthen its auto industry, preserve the manufacturing sector, and add emerging sectors — such as clean energy — to Michigan’s economic portfolio. Today, one-third of all North American electric vehicle battery production takes place in Michigan, the state is one of the top five states for clean energy patents, and 126,000 Michiganders were employed in the clean energy sector prior to COVID-19.

Secretary Granholm was also the first woman elected Attorney General of Michigan and served as the state’s top law enforcement officer from 1998 to 2002.

After two terms as governor, Jennifer Granholm joined the faculty of the University of California, Berkeley as a Distinguished Professor of Practice in the Goldman School of Public Policy, focusing on the intersection of law, clean energy, manufacturing, policy, and industry. She also served as an advisor to the Clean Energy Program of the Pew Charitable Trusts.

Jennifer Granholm began her career in public service as a judicial clerk for Michigan's 6th Circuit Court of Appeals. She became a federal prosecutor in Detroit in 1990, and in 1994, she was appointed Wayne County Corporation Counsel.

Secretary Granholm, an immigrant from Canada, is an honors graduate of both the University of California, Berkeley and Harvard Law School. She and her husband, Daniel G. Mulhern, have three children.