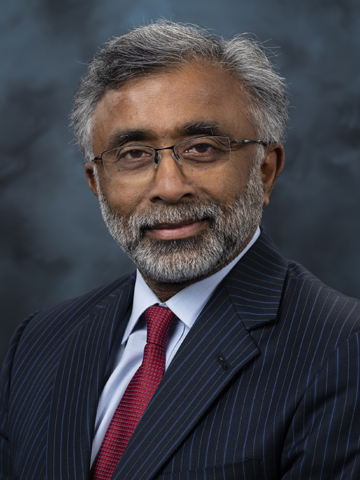 Thomas Zacharia, director of Oak Ridge National Laboratory (ORNL), guides 5,400 staff in solving scientific and technical challenges for the U.S. Department of Energy and other sponsors, managing an annual budget of $2 billion. Following a postdoctoral appointment, Thomas joined ORNL's Metals and Ceramics Division in 1989. He established and led the Materials Modeling and Simulation Group and became director of the Computer Science and Mathematics Division in 1998, Deputy Associate Laboratory Director (ALD) for High Performance Computing in 2000, and ALD for Computing and Computational Sciences in 2001. He led the creation of the Oak Ridge Leadership Computing Facility, fielding the world's fastest supercomputer, and led delivery of a petascale system for the National Science Foundation in 2008. Before becoming ORNL's director, he was Deputy for Science and Technology. Thomas holds a B.S. from the National Institute of Technology Karnataka, Surathkal, India, an M.S. from the University of Mississippi, and a Ph.D. from Clarkson University. He holds two patents and has authored more than 100 publications. He co-chairs the National Commission on Innovation and Competitiveness Frontiers established by the Council on Competitiveness. He is a Fellow of the American Welding Society, a Corresponding Member of the International Academy of Astronautics, and a Fellow of the American Association for the Advancement of Science.