A banner signed by American Nuclear Society members during the society's Winter Meeting in Washington, DC, signifies the support and encouragement of ANS membership for the people of Japan and the workers at the Fukushima Daiichi nuclear power plant who are rebuilding after the Great East Japan Earthquake and tsunami.

In a letter to Eric Loewen, ANS president (page 1) (page 2), Tokyo Electric Power Company president Toshio Nishizawa thanked ANS for the banner and noted that donations totaling $240,000 have been collected through the ANS Japan Relief Fund to support the workers at the plant and their families. Nishizawa also noted that in December the Fukushima Daiichi plant was brought to a condition equivalent to "cold shutdown" and that it "entered into a new phase of mid- and long-term Roadmap for decommissioning of the reactors." 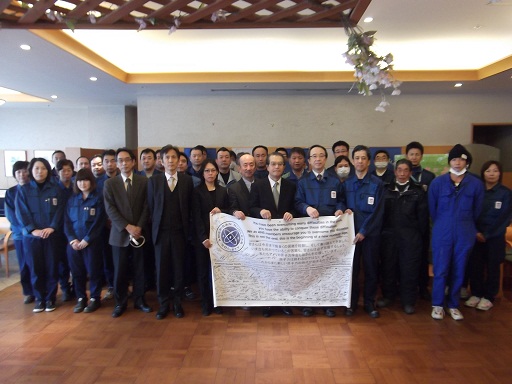 Loewen said during the Winter Meeting, "We continue to honor the brave men and women of the Japanese nuclear community who are committed to the clean-up and rebuilding efforts after the earthquake and tsunami in Japan. We want them to know that we recognize their dedication and hard work. To do this, we created a banner to be signed by meeting attendees who can personally send encouragement and best wishes to demonstrate our continued support. Our Japanese colleagues know they are remembered through our financial support and the banner message." 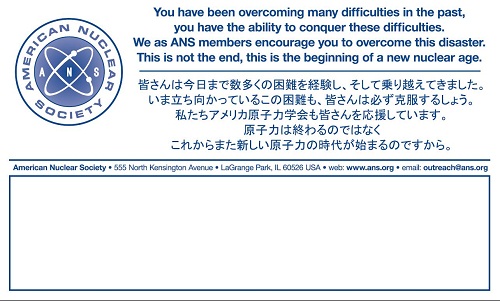 Banner message in English and Japanese 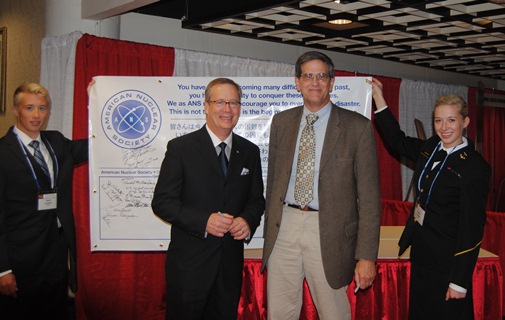