Greetings from a proud member of "the nuclear party"

Back in the playground-about half a century ago-I learned that it can be fun and frustrating to the bullies if you cheerfully accept the tags that they apply to you. Back then, I was called a four-eyed nerd; for some odd reason I had schoolmates who thought it was a bad thing to be the one who got straight A's and seemed to enjoy learning. The teasing did not bother me; it motivated me to read more good books and to strive to do even better in class.

While reading a recent Matt Wald post on the New York Times Green Blog, I realized that a certain group of bullies who have been fighting nuclear energy development for decades were employing similar name-calling tactics as those playground bullies.

Of the four other members, two are Republicans and two are Democrats, but Mr. Bradford said the letter was not in fact bipartisan. "In Washington, you've got a situation where the 'nuclear party' transcends the Republican and Democratic party,'' he said. "You've got four members of the nuclear party writing a letter about the chairman, who's never been a member of the nuclear party.''

Those four members have backgrounds in nuclear engineering, the nuclear Navy and related fields; Dr. Jaczko has a Ph.D in particle physics and came to the commission after a career on Capitol Hill, including a stint as an aide to Harry Reid of Nevada, the leader of the Senate's Democratic majority.

Matt might have also pointed out that Dr. Jaczko's career on Capitol Hill included a 2.5 year stint with Rep. Ed Markey (D., Mass.), who can lay claim to being the leading member of the antinuclear party.

I actually enjoyed the subtle way that Wald phrased that exchange and showed that by Bradford's categorization, "the nuclear party" consists of people who have actually studied nuclear energy, worked with nuclear energy, and understand the technology. Quite frankly, I like being tagged with that appellation. Anybody who wants to can call me a member of the nuclear party, which makes its energy system choices based on knowledge and facts.

In the playground, I did not mind being called a nerd by people who were older and bigger, often because they had been held back a year or two in school. Even then, I was pretty certain that I would lead a more prosperous and interesting life than they would. In this case, I have no problem being teased by people who do not have a clue about the value of clean, energy dense, reliable, and affordable nuclear energy as a tool to address many of our most pressing problems.

Bradford, in his NRC days

Peter Bradford, for example, is a lawyer who once served as a Jimmy Carter appointee on the Nuclear Regulatory Commission. He was a part of the group that failed miserably to provide useful guidance to the American public during the Three Mile Island accident. One of his partners on the phone call press conference that was the basis for Wald's blog post was Mark Cooper, a man with a PhD in sociology earned by writing a book about a political transformation in Egypt.

Cooper was also the author of a discredited 2009 economic analysis of the future cost of nuclear energy that formed the sole basis for the nuclear cost portion of the infamous NC Warn commissioned paper titled Solar and Nuclear Costs - The Historic Crossover: Solar Energy is Now the Better Buy. 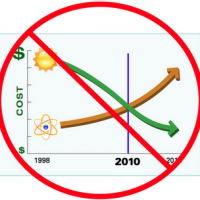 I wrote about that paper-and the way that some mainstream media outlets published the lie that solar energy was somehow cheaper than nuclear energy-in an Atomic Insights post titled Gullible Reporting By New York Times On the Cost of Solar Electricity Versus Nuclear Electricity. That post was the most visited work I produced in 2010. I was joined in the effort to point out the flaws and to obtain an editorial correction by David Bradish at NEI Nuclear Notes and by Dan Yurman at Idaho Samizdat.

Remembering that skirmish brings up another good point about what I learned about responding to bullies back in the playground. Even though I did well in class and wore glasses, I had developed an extensive network of friends at school, in the scouts, at church, and on my swim team who also liked to learn, and enjoyed many activities together. Later in life, I taught my children that there were effective ways to respond to bullies and cliques; one of the best ways was to develop a strong network of supporting friends.

That is an area where the nuclear party needs some improvement and a corrective action program.

Along those lines, I will close with some good news areas and opportunities in 2012 where we can all start pulling for each other and work to overcome the completely incorrect perception that there is something wrong about being a strong supporter of nuclear technology development. We are LONG past the initial sin of developing and using a nuclear weapon; we have atoned by developing an amazing improvement over the useful but rapidly depleting fossil fuels that have powered our society for about 150 years.

Happy Nuke Year, fellow nuclear party members. Let's put some of those playground lessons to work, be proud of our knowledge, build friendships, and support each other against the antinuclear bullies who do not have a clue about the power that the industrialized world needs in order to keep improving human prosperity.

Rod Adams is a pro-nuclear advocate with extensive small nuclear plant operating experience. Adams is a former engineer officer, USS Von Steuben. He is the host and producer of The Atomic Show Podcast. Adams has been an ANS member since 2005. He writes about nuclear technology at his own blog, Atomic Insights.

There is a good reason for American nuclear energy professionals to learn more about the dynamics of the natural gas market. We have been told numerous times that cheap natural gas is making...