Gas and Nuclear: A Comparison of Two Local Plants

Many recent speeches (and blog posts) have compared nuclear and gas as sources of electricity generation for our future.  In this post, I will bring the comparisons closer to home, describing some of the similarities and differences between the Vermont Yankee nuclear power plant in Vernon, Vt., and the Granite Ridge Combined Cycle power plant near Manchester, N.H. Which technology is the future: gas or nuclear? Or are they both the future?

Overview of the plants

Vermont Yankee is a 620-MW boiling water reactor nuclear power plant, owned by Entergy Corporation. It was commissioned in 1972. Entergy owns more than 40 power plants in the United States (natural gas, nuclear, coal, and oil), as well as an extensive distribution system.

Granite Ridge is a modern combined cycle gas turbine plant (CCGT) whose maximum output varies between 660 MW and 790 MW, depending on the season. It went online in 2003. The plant was built by AES, a multi-national company that owns 34 power plants and an extensive distribution system in the U.S., and further holdings in 27 countries.

The ILEAD Energy Safari course visited Granite Ridge on November 8.  Bob Hargraves wrote an excellent blog post about that visit, including many pictures.

The public face of the two plants

Everyone in New England knows that Vermont Yankee exists:  It is always in the news. The plant also operates several websites, including:

In contrast, few people know that the Granite Ridge plant exists.  It is seldom in the news, and does not have its own website. 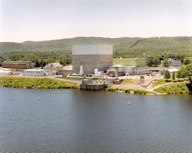 Vermont Yankee is located on the Connecticut River near Vernon Dam. It gets its cooling water from Vernon Pond (the lake behind the dam).

Granite Ridge is tucked away in an industrial park. It gets its cooling water from the Manchester sewage treatment plant. The round object near the forefront of the Granite Ridge picture is a tank of yogurt from the StonyField Farms yogurt factory next door.

In the picture, you can also see that Granite Ridge has relatively low stacks. The plant does an excellent job of cleaning NOx, so the stacks emit only carbon dioxide and water. They do not need to be very high. Also, the plant is located in an industrial park on the flight path to the Manchester airport, which necessitates building height restrictions at the site.

Vermont Yankee is a major employer in its region, employing 650 people.

In contrast, a shift of four people can operate Granite Ridge. My guess is that Granite Ridge employs less than 100 people. 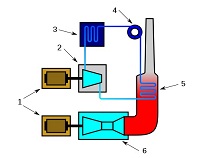 Granite Ridge has 50-percent thermal efficiency, higher than any coal or nuclear plant. Though the plant is efficient and the price of natural gas is at historic lows, natural gas remains a high-end fuel. This means that natural gas plants are dropped from the mix when the grid doesn't need much power. Power prices on the grid are frequently below Granite Ridge's break-even point. The Energy Safari group was told that the plant does not operate as steadily as it would like to operate.

Granite Ridge is not a "peaker" plant, but it can easily move output up or down 5 MW a minute. It is frequently instructed to "load-follow" by the grid operator. Vermont Yankee is a "base load" plant, and thus usually runs at 100 percent. Both are very reliable plants.

Vermont Yankee is running steadily after 40 years, operating under a power purchase agreement put in place in 2002. This agreement gives Vermont Yankee about 4.5 cents per kWh. Granite Ridge is trying to be profitable and keep running while having the advantage of historically low gas prices. I believe that Granite Ridge sells at the market price, which goes above and below 4.5 cents quite regularly. For example, at late afternoon Friday, November 18, the local grid day-ahead market was 3.7 cents per kWh, while the real-time market was 5.1 cents per kWh.

Which is the future?

In my opinion, the future balance between gas and nuclear will basically be determined by whether or not Americans consider carbon dioxide to be important. Americans are quite willing to do small personal things to lower emissions (e.g., replacing light bulbs). We do not, however, tend to take carbon dioxide seriously when it comes to choices about power plants.

Granite Ridge is an impressive plant, with excellent control of NOx, and high thermal efficiency. It can load-follow, and it is using sewage treatment effluent as cooling water. Plants like this will be part of the future.

But the whole future? First, all fossil fuels carry carbon dioxide and climate change concerns. Second, grid operators do not like to see the grid overly dependent on a single fuel source, especially one like natural gas with major price volatility. The grid needs a mix of plants. Nuclear and natural gas must both be part of that mix.