You are being served at Vermont Yankee plant

On Sunday, October 30, Meredith Angwin and I arrived in Washington, DC, to attend the American Nuclear Society Winter Meeting. At the meeting, we presented the biannual Green Bag Lunch talk, titled "Political Activism in Vermont."

Meanwhile, the SAGE Alliance was holding a demonstration at the entrance road to the Vermont Yankee nuclear power plant. Meredith and I looked forward to reports from the demonstration, particularly because of changes that the organizers had made in preparing for this event. 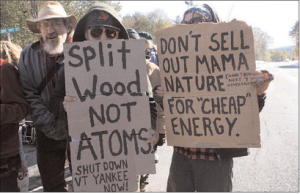 The SAGE Alliance is a new organization. A study of its website, however, shows it to be a grouping of "the usual suspects." We have found, over the years, that there is a certain hard core of people in the New England area who are passionately opposed to nuclear power. They support every anti-nuclear activity in the region, and have formed several different groups. Forming yet another new group gives the impression that the number of nuclear opponents is expanding, while in reality the number of opponents seems to remain about the same.

We first heard of plans for this demonstration while attending a talk by Indian anti-nuclear activist Vaishali Patil at the Vermont Law School. Participants for training in non-violent demonstration techniques were recruited at the Patil meeting, and announcements were made that the SAGE Alliance event would feature "Puppet Theater" and a presentation of a "Trojan Cow" to the Vermont Yankee plant. The event was announced on the Clamshell Alliance website on October 10 (see Meredith's post at Yes Vermont Yankee).

Two small demonstrations were soon held at the plant, which we learned of only afterward because there were no press releases and no press reports. Arrests were made, and court appearances were reported in the media. Vermont's new state's attorney has decided to prosecute these cases, unlike the previous office holder who did not want to waste the court's time while providing a forum for the protesters (arrests at the plant years ago were prosecuted, but continuously trying cases of trespass without damage was found to be unproductive).

On September 20, however, there was an arson attack on Vermont Yankee's offsite offices, and it is possible that this arson attack influenced the state's attorney's decision to press charges.

On October 25, in an article in the Rutland Herald newspaper (unfortunately behind a paywall), Bob Bady of the Safe and Green Campaign was quoted as saying that information from pro-nuclear groups that the SAGE Alliance's demonstration was being organized by the Clamshell Alliance was not true. Shortly thereafter, the SAGE Alliance's website announced the demonstration, and non-violence was stressed. There were no words about civil disobedience, so it appears that the planning underwent some changes as events unfolded.

The event, when it took place, was reported by the local Brattleboro Reformer newspaper, which has consistently covered plant news. It was reported that the event drew 150 protesters from Vermont, New Hampshire, Massachusetts, Connecticut, and New York. Similarly, an outing called the "Vigil for All Victims" was held earlier this year outside the Vermont Yankee plant for the victims of the earthquake and tsunami in Japan, and it had an attendance of 250 or more people from the same region. The "Vigil" was anti-nuclear (to no one's surprise). The Reformer article also noted that a pro-nuclear rally held a week earlier at the plant had an attendance of only 30. This was true at the beginning of the rally, but the number grew to 60 people when local residents joined in.

The announced purpose of the SAGE Alliance's October 30 anti-nuclear event was to "Put the Plant on Notice" that it will be forced to shut down at the end of its original 40-year license. At the event, protestors held signs showing the number of days remaining until March 21 next year, when the current license expires. Since the event, one or two people have shown up every day at the plant with a sign showing the number of days until the license ends.

The Clamshell Alliance, which has recently reemerged, was formed in the 1970s to oppose the Seabrook nuclear power plants. The group occupied the site during early construction and many protestors were arrested. By the end of construction, and while waiting for an operating license (which took four years-another story), the group staged "fence climbs" that resulted in arrests. The media would show up, the fence would be climbed by a few designated individuals, they would be arrested as agreed upon with the police, the media would have their footage, and all would go home unharmed. Eventually, the Clamshell Alliance wound up with a contempt of court citation, and went underground. The group offered training at Vermont Law School in non-violent civil disobedience and direct action tactics . So, when would these tactics be used? Is this the reason that the SAGE Alliance has been formed, and the reason that Bady said it was "not true" that the Clamshell Alliance was organizing the October 30 demonstration?

One stated SAGE Alliance objective is to force the Vermont Yankee plant to stop operating when the original 40-year license is up. Could the group be planning to block the road to the plant with hundreds of sitting protesters? Hundreds were arrested at the Seabrook plant 30 years ago, and this jammed up the legal system. On the other hand, the SAGE Alliance seems to be distancing itself from the Clamshell Alliance, and perhaps from the Clamshell tactics.

Howard Shaffer has been an ANS member for 35 years. He has contributed to ASME and ANS Standards committees, ANS committees, national meeting staffs, and his local section, and was the 2001 ANS Congressional Fellow. He is a current member of the ANS Public Information Committee and consults in nuclear public outreach. He is coordinator for the Vermont Pilot Project. Shaffer holds a BSEE from Duke University and an MSNE from MIT. He is a regular contributor to the ANS Nuclear Cafe.