At 9 a.m. on September 12, the Entergy v. State of Vermont lawsuit began hearings, regarding the continued operation of the Vermont Yankee nuclear power plant, at the federal courthouse in Brattleboro, Vt.  In June,  Howard Shaffer and I had gone to Brattleboro to stand outside the courthouse on the morning of the injunction hearing.  At that time, the two of us provided a small pro-nuclear presence at an anti-nuclear rally organized by the Safe and Green Campaign.

We knew that the Safe and Green Campaign would be back again in front of the courthouse for the September trial, and Howard and I resolved to be there too. We decided that this time we would be better organized.

Why did we decide to to hold our own rally? Basically, we wanted to be visible and to encourage people who are in favor of nuclear energy. The opponents fill the newspaper and TV headlines with their rallies, concerts, and vigils against nuclear power, but the public rarely hears the pro-nuclear side. Our rally was an experiment in changing that dynamic.

Also, Vermont Yankee employees often have to walk through gauntlets of opponents: people holding vigils outside the plant, bringing puppet shows to the plant gates, trying to get arrested at the plant.

We wanted the pro-nuclear legal team to see some friendly faces on their way into the courtroom. It's called "encouraging your friends."

The first step in planning was to recruit people and to find ways to be visible.

People: I have an extensive e-mail list through the Energy Education Project of the Ethan Allen Institute, and the people on my list had their own e-mail lists, which included representatives of the union at Vermont Yankee (the International Brotherhood of Electrical Workers).  I had hoped that about 20 people would attend our rally, but we had more, perhaps 25, because some people brought their friends.

Visibility: Cavan Stone and I designed t-shirts to increase our visibility. The American Nuclear Society provided some great posters by Suzy Hobbs of PopAtomic Studios.

Another person brought a large green Vermont Yankee lawn sign, and the IBEW (the union) representative brought a truck and some signs made by local students. In these photos, you can see Cavan wearing the t-shirt and holding the Suzy Hobbs poster.

Before the rally, we stressed that we weren't there to have confrontations. We were there to be a presence, not to have arguments with the opponents of the plant.

Although some opponents were aggressive, in general, both sides avoided confrontation.

It is a truism that "no battle plan survives contact with the enemy." No matter how you plan, when you are standing out on the street, things are different. Mostly, the rally worked the way we wanted it to work, but not completely.

I think we had discomfited the plant opponents a little, just by being there. I don't know that they were happy to read this in the local paper:

Before proceedings began on Monday morning, there were dueling vigils in support of, as well as opposition to, keeping Vermont Yankee open another 20 years.

Representatives from the Ethan Allen Institute's Energy Education Project, the American Nuclear Society Vermont Pilot Project, and the Coalition for Energy Solutions organized the pro-VY vigil, while the Safe and Green Campaign sponsored what they called "a vigil to support the state of Vermont" in its legal fight against Entergy.

While our group attempted to stand together, we cannot own the sidewalk. The Safe and Green campaign people had every right to break up our lines by standing between us. We expected that, but  we didn't expect to see some Safe and Green people stepping into the street in front of us to hide us with their signs. Luckily, this incident was short-lived, because most of the Safe and Green people were polite. Our people, however, began stepping out into the street also, and eventually the police told everyone to get back on the sidewalk.  (A fuller description is at my post at Rally Retrospective.)

As we stood there, many people in passing cars honked and waved at us, which was very gratifying!

We garnered some press interviews and one TV interview. The next day,  the pictures in the local papers showed pro- and anti-Vermont Yankee protestors. Right after the rally, our group had a good time having breakfast together in the savings and loan community room, arranged by a local supporter. All in all, our group wanted to rally again, and soon!

I very much appreciate all of those who took the time to be there at the courthouse that morning. As a spouse of a longtime VY employee I thought about joining you... I can't tell you how much we appreciate what you all did. It means so much.

Press release for the rally.

Thoughts about the trial.

Some photos from the rally: 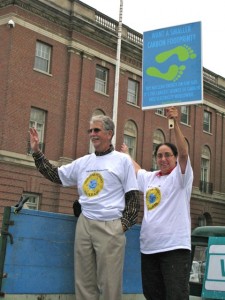 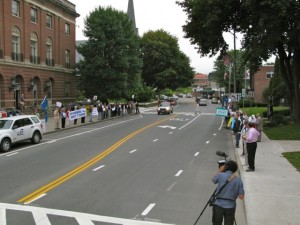 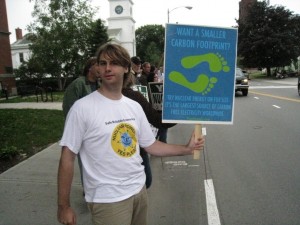 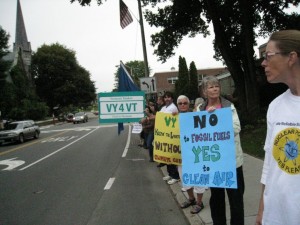 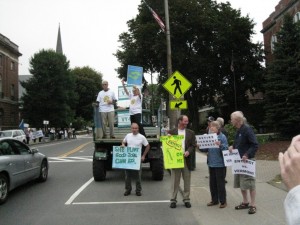