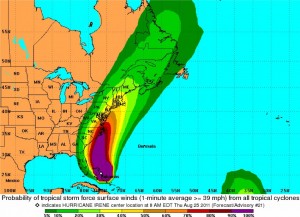 Nuclear power plants are the most robust facilities in the U.S. infrastructure, with reactor containment structures composed of steel-reinforced concrete that have proven their ability to withstand extreme natural events.

In addition, nuclear plant operators are trained and tested one out of every six weeks to safely manage extreme events such as hurricanes. Plant operators also have multi-day staffing plans, and resources, to ensure that personnel are on-site and prepared to respond to situations that may arise as a result of the storm.

The NRC's Roger Hannah told wire services Aug 26 that typically utilities begin shutting down reactors 12 hours before winds reach speeds of 74 miles an hour.  He pointed out there is a big difference between a storm surge and a tsunami.

In Washington, DC, the NRC is mobilizing its emergency operations center to keep track of conditions at all the nuclear reactors up and down the U.S. eastern seaboard.  The center stays in close touch with resident inspectors at the plants. If land lines go out, they switch to satellite phones to stay in touch.  Once the storm has pass, the NRC works with FEMA to assess any damage.

While preparations are generally the same at all reactors when faced with an imminent hurricane, here are some highlights from the different sites.

* At Dominion's Millstone nuclear plant in Connecticut, which is located on Long Island sound near Waterford, CT, workers are preparing defenses against an expected storm surge.  Staffing plans for storm emergencies are being put into effect.  Outside maintenance project are being postponed until after the storm passes.

* At Energy's Indian Point, protection of the two reactors there focuses on possible wind damage to the switch yard. If off-site power is lost, the plant will run on emergency diesel generators.

* Similar preparations are underway at Constellation's two reactors at Calvert Cliffs, MD, and, at PSEG's Salem and Hope Creek reactors which face the Delaware River estuary in southwestern NJ.

At Constellation plant manager said that staff working in the Emergency Response Organization (ERO) will be tasked to 12 hour duty shifts and all ERO personnel will remain on site.  Staff use a checklist to insure they bring necessary items with them for the shifts.  Sleeping areas and round the clock cafeteria access are mobilized for the duration.

* At Exelon's Oyster Creek reactor, which faces the Atlantic ocean in southeastern NJ, workers are securing equipment that might be impacted by high winds.  Emergency diesel generators are checked to insure they are ready to run and have reserves of fuel.

* In North Carolina Progress Energy began preparations on Wednesday of this week at its Harris and Brunswick plants.    Brunswick is designed to withstand a storm surge of 22 feet above sea level.  The plant will continue to operate unless winds rise above 75 mph.

Nuclear energy facilities are designed to withstand natural occurrences greater than those encountered in the regions where they are located. They are built to withstand floods, earthquakes and high winds, and have numerous safety systems that will operate and safely shut the reactor down in the event of a loss of off-site power. These plant designs are routinely reviewed and modifications are made to assure their integrity and safety.

Hurricanes, wildfires, and other disasters across the United States caused $95 billion in damage last year, according to new data referenced by the New York Times. The cost is almost double...

During the three years since March 11, 2011, the world has had the opportunity to learn a number of challenging but necessary lessons about the commercial use of nuclear energy. Without...

At about a quarter to three in the afternoon on March 11, 2011, a gigantic and unprecedented earthquake struck just over 110 miles off the coast of Fukushima Prefecture in Japan. The quake was...

As the Eastern half of the United States falls under siege by Hurricane Sandy and combined weather fronts-which together are being termed "Frankenstorm"-the nuclear community is targeted by...

Scroll down to hurricane graphic for resources and links....

In recent days, a number of articles have been printed that assert that a grave danger exists at the Fukushima Daiichi nuclear generating station. These articles claim that this danger exists...

The American Nuclear Society Special Committee on Fukushima will issue its full report on March 8 at the National Press Club in Washington, DC, at 10AM EST. The press conference will be...