As the Eastern half of the United States falls under siege by Hurricane Sandy and combined weather fronts-which together are being termed "Frankenstorm"-the nuclear community is targeted by nuclear opponents keen on capitalizing on this severe weather event. A recent piece quoting Arnold Gundersen asserts that Oyster Creek Nuclear Generating Station is facing serious problems should it lose offsite power, saying essentially that the plant will be unable to provide cooling for the spent fuel in its spent fuel pool.

This allegation is without merit.

This document-a memorandum from the Nuclear Regulatory Commission  staff to the then-operator of Oyster Creek-spells out the spent fuel pool (SFP) cooling arrangements in place back in 2000. It includes the following description of the SFP cooling arrangements:

Make up water to the SFP is normally provided by the condensate system from the condensate storage tank (CST) which has a nominal capacity of 525,000 gallons. The condensate pumps can provide 250 gallons per minute (gpm) with one pump operating or 420 gpm with two pumps. Additional makeup can be provided from the demineralized water storage tank (nominal capacity 30,000 gallons) by connecting the demineralized water transfer pumps to the SFP with hoses. The fire protection system can also provide makeup from the fire pond to the CST using the 2,000 gpm diesel driven fire pumps through a permanent connection.

The SFPCS {Spent Fuel Pool Cooling System} removes decay heat from fuel stored in the SFP through its associated heat exchangers to the reactor building closed cooling water (RBCCW) system. The SFP water is maintained within its TS limits by these systems. The SFPCS consists of two SFP pumps, two SFP shell and tube heat exchangers, two augmented fuel pool pumps, and one augmented fuel pool plate and frame heat exchanger. In addition, the SFPCS also includes interconnections with the condensate demineralizers and the condensate systems which filter and demineralize the SFP water as well as provide makeup water to the SFP. The SFPCS operates continuously to maintain the SFP water temperature at or below the Oyster Creek TS limit (maximum of 125 degrees Fahrenheit (F)).

As we can see, a total loss of offsite power (LOOP) scenario has clearly been considered-otherwise, diesel fire pumps would not have been mentioned. 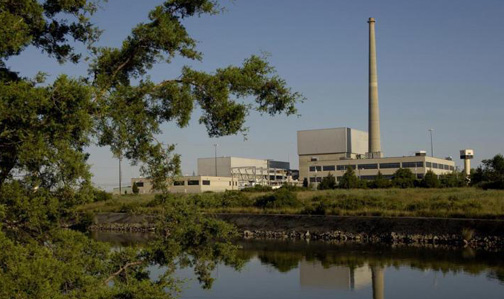 Oyster Creek, like all other operating U.S. nuclear plants, was built to design considerations (10 CFR 50 Appendix A) that set limits on design that includes the protection of spent fuel pool from events both man-made (operational) and natural. The plant has been designed to handle the full heat load of the spent fuel placed in the pool-even with a loss of offsite power.

Spent fuel pool cooling has received greater attention since the Fukushima Daiichi accident; during that accident and for some time after, many had wrongly assumed and asserted that the spent fuel pools were in dire condition. In fact, some even claimed that Fukushima Daiichi Unit 4 was going to collapse and that the spent fuel was going to trigger a cataclysm. Those allegations were refuted at the time, multiple times,  and have been proven false.

Even though early post-Fukushima assumptions about spent fuel pools were overly unrealistic, the NRC has emphasized SFP cooling and level measurement as a part of its post-Fukushima action plan. Many experts and the Nuclear Energy Institute consider this approach sensible. NEI points out, however, via NEI Nuclear Notes that moving SFP actions to Tier 1 in no way implies that operating U.S. nuclear plants aren't already safe. Read that post here.

The SFPCS (Spent Fuel Pool Cooling System) is designed for both normal and accident conditions of loss of offsite power coincident with a single active component failure.  The augmented SFPCS is designed to provide a seismically qualified cooling loop capable of providing cooling during such conditions.

As if that were not enough:

Clearly, there is provision for SFP cooling at Oyster Creek using two SFP systems-the one that was originally installed and an augmented system installed when the pool capacity was increased-and also it's a fact that the plant, like all others in the path of the storm, is and has been well aware of the approach of this storm and has even more personnel (and NRC inspectors) on site than usual, making full preparation for any event. "Any event" includes extended loss of offsite power.

UPDATE:  Exelon has re-confirmed to the American Nuclear Society by telephone and e-mail that Oyster Creek does in fact have numerous, redundant cooling systems for the spent fuel including closed-loop and service water systems. Exelon tells us that if required, two locomotive-sized diesel engines are ready and standing by should offsite power be lost, to provide power to those two backup systems during the refueling outage should an extended LOOP scenario arise.

Exelon has, as expected by many, declared an Unusual Event at Oyster Creek due to the rising water levels. Below are excerpts from Exelon's press release on this declaration (emphasis added):

This is an anticipated declaration required by procedures and is the result of Hurricane Sandy's impact on the region. There is no challenge to the safety of the plant. Oyster Creek is currently shut down for planned maintenance and refueling.

Oyster Creek is a robust and fortified facility, capable of withstanding the most severe weather. When the storm was identified, operators performed a host of plant inspections to ensure that all safety systems were operational and that outside equipment and materials were properly secured.

An Unusual Event is the lowest of four emergency classifications established by the U.S. Nuclear Regulatory Commission. There is no danger to the public or plant employees associated with this declaration.

Oyster Creek is about 60 miles east of Philadelphia in Ocean County, New Jersey. The plant produces 636 net megawatts of electricity at full power, enough electricity to supply 600,000 typical homes, the equivalent to all homes in Monmouth and Ocean counties combined.

Will Davis is a writer and Social Media consultant for ANS, is a Contributing Reporter to Fuel Cycle Week, owns and writes the Atomic Power Review blog, and is a former US Navy Reactor Operator, qualified on S8G and S5W reactor plants.