Love Feast Under The Golden Dome

On April 25, Arnie Gundersen (of Fairewinds Associates, of Vermont), a well-known nuclear opponent, spoke before Vermont's House Natural Resources and Energy Committee. He was welcomed with open arms to testify on House bill H-139, regarding post-closure activities at nuclear power plant sites. 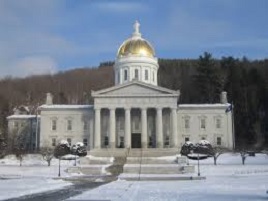 Nuclear opponents have continually raised concerns about the return of the Vermont Yankee plant site to a "greenfield" condition after the plant's eventual decommissioning. The opponents assert that the original agreement to build the plant promised that the site would be returned to the condition that existed there before the plant was built. They have asserted that the Nuclear Regulatory Commission's regulations don't require enough cleanup to achieve safe radiation levels and to remove all traces of the plant, and so bill H-139 would require an additional $40-million fund toward site cleanup.

Further, the opponents don't like the fact that used fuel is kept in fuel pools for longer than five years. Used fuel in pools is not covered by bill H-139, but the issue was discussed during the April 25 meeting. A week earlier, the committee heard testimony from Robert Alvarez, of the anti-nuclear Institute for Policy Studies organization, on the fuel-pool issue.  I testified that pool storage of fuel is safe at a session immediately before Mr. Gundersen's.

As it now stands, used fuel in dry casks will remain on the Vermont Yankee site after its decommissioning. Dry cask storage of used fuel already exists in New England at the former Yankee, Maine Yankee, and Connecticut Yankee sites.

The April 25 meeting began with Chairman Tony Klein stating that H-139 is not about radiological safety, but about land use and the risk to ratepayers and taxpayers. He enthusiastically welcomed Gundersen back to testify.

Gundersen stated that he was appearing at the meeting as a private citizen, after having been previously employed by the legislature on panels to review the  Vermont Yankee plant. Since his earlier appearance, he has been to Japan, written a book about the Fukushima accident that is a best-seller in Japan, and is writing a report concerning the San Onofre nuclear power plant in California. He is a leader in the anti-nuclear industry, and all he says and does must be taken in that context.

In his April 25 testimony and during his answers to questions, Gundersen made every effort to link the Vermont Yankee plant to as many problems as possible. In short, it was a skillful presentation by a leading practitioner of Fear, Uncertainty, and Doubt (FUD).

(The points made below are listed in the order in which Gundersen presented them, as taken from my own notes. This makes for a long and jumbled list, but to edit it into a more precise sequence, as a media report might do, would lose the sense of what was presented to the members of the legislature.)

Question: What happened to the main condenser issue?

Answer:  This recent refueling replaced no major components. (My note: Most who are knowledgeable of boiling water reactors such as Vermont Yankee would consider a recirculation pump motor a "major component.")

Minor repairs for tube leaks were made.

The next refueling will be the "big one"-uprate hearings identified the main condenser as nearing the end of its life.

Question:  What are other places doing?

Question: What is greenfield?

Question:  What will be left above ground?

Answer: Per the NRC, cooling towers and the office building can stay. But in BWRs such as Vermont Yankee, there is contamination "all over the site." All machinery is gone. Buildings are demolished to several feet below grade.

Question: Didn't the NRC send a letter to Vermont Yankee saying that its decommissioning estimate was adequate?

Answer: Vermont Yankee estimated greenfield cost at $40 million in 2008. The estimate was done by TLG, an Entergy owned company.

Question:  Why is used fuel kept in the pool?

Answer:  If taken out now, Entergy pays. If taken out in decommissioning, the fund pays. If the plant operates to 2032  and goes into SAFSTOR, the used fuel must be removed from the reactor and the pool.

Chairman Klein: I visited the plant a few times and was told that the dry cask pad will only hold enough for operation to 2012.

As stated above, Gundersen's performance was a skillful use of FUD.

Nonetheless, the evidence contradicts Gundersen. The NRC gave Vermont Yankee a Green (the best) "report card" for 2012. The plant just completed a refueling in less than a month, after a "breaker to breaker" run (non- stop since the last refueling). Entergy is solidly behind the plant, as evidenced by its pursuit of a federal court suit against the state of Vermont for intruding on the NRC's domain of safety. The employees and supporters of Vermont Yankee are firmly behind the plant and its continued operation, as shown by their participation in political activities in support of the plant.

He is coordinator for the Vermont Grassroots Project. Shaffer holds a BSEE from Duke University and an MSNE from MIT. He is a regular contributor to the ANS Nuclear Cafe.