In this first of a series of articles on nuclear propulsion for space travel, allow me to enlighten each of you about the fascinating history of this technology. This post will cover three early projects, with posts to follow that will explore other technologies along with an assessment of future prospects.

The great astronomer Carl Sagan once said that one cannot travel fast into space without traveling fast into the future. He was, of course, referring to the time dilation effect made manifest by speeds very close to the speed of light, 300,000 km/s. Sagan was also a strong proponent of nuclear power for use in space propulsion systems, in particular nuclear pulse propulsion. He outlined three of these in his award-winning series Cosmos: Project Orion, Project Deadalus, and the Bussard Ramjet.

Nuclear pulse propulsion is a theoretical method of spacecraft propulsion that uses nuclear explosions for thrust. It was first developed as Project Orion by the Defense Advanced Research Projects Agency (DARPA), an agency of the U.S. Department of Defense, after a suggestion by Stanislaw Ulam in 1947. Newer designs using inertial confinement fusion have been the baseline for most post-Orion designs, including Project Daedalus and Project Longshot. 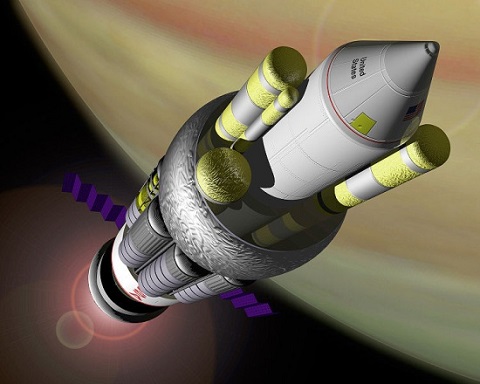 Project Orion was the first serious attempt to design a nuclear pulse rocket. The design effort was carried out at General Atomics in the late 1950s and early 1960s. The idea of Orion was to react small directional nuclear explosives against a large steel pusher plate attached to the spacecraft with shock absorbers. Efficient directional explosives maximized the momentum transfer, leading to specific impulses in the range of 6,000 seconds, or about 12 times that of the Space Shuttle Main Engine. With refinements, a theoretical maximum of 100,000 seconds (1 MN·s/kg) might be possible. Thrusts were in the millions of tons, allowing spacecraft larger than eight million tons to be built with 1958 materials.

The reference design was to be constructed of steel using submarine-style construction, with a crew of more than 200 and a vehicle takeoff weight of several thousand tons. This low-tech single-stage reference design would reach Mars and back in four weeks from the Earth's surface (compared to ≈50 weeks for NASA's current chemically powered reference mission). The same craft could visit Saturn's moons in a seven-month mission (compared to chemically powered missions of about nine years).

A number of engineering problems were found, and solved, over the course of the project. Many of these related to crew shielding and pusher-plate lifetime. The system appeared to be entirely workable, and was under serious development in the United States, when the project was shut down in 1965. The primary reason given was that the Partial Test Ban Treaty made it illegal to detonate nuclear explosions in space (before the treaty, the United States and the Soviet Union had already detonated at least nine nuclear bombs, including thermonuclear bombs, in space; i.e., at altitudes over 100 km).

There were also ethical issues that would be associated with launching such a vehicle from within the earth's magnetosphere. Calculations showed that the fallout from a takeoff could be projected to lead to the premature death of between 1 and 10 people. Thus, this project would be entirely feasible if the ship were launched from outside the magnetosphere-the only remaining difficulty being, of course, transporting everything to the launch point.

One useful mission for this technology near-term would be to deflect an asteroid that could collide with the earth, which was depicted dramatically in the 1998 film Deep Impact (in which the author appeared as an extra). The extremely high performance would permit even a late launch to succeed, and the vehicle could effectively transfer a large amount of kinetic energy to the asteroid by simple impact-in the event of an imminent asteroid impact, the theorized effect of health effects from fallout would probably not be considered prohibitive. An automated, one-way mission would eliminate the most problematic issue of the design: the shock absorbers.

Orion is an example of an interstellar space drive that could theoretically be constructed-with available technology. 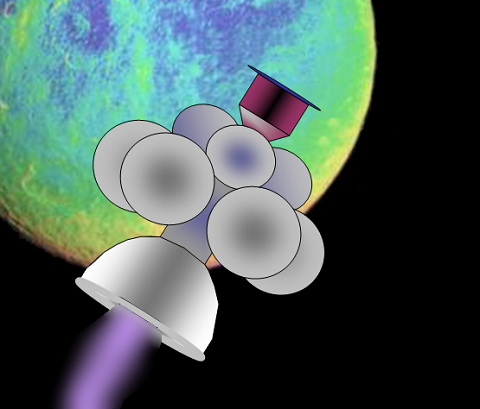 Project Daedalus was a study conducted between 1973 and 1978 by the British Interplanetary Society (BIS). The objective was to design a plausible interstellar spacecraft that could reach Alpha Centauri in roughly 45 years, resulting in a velocity of about 10 percent of the speed of light. A dozen scientists and engineers  worked on the project. At the time, fusion research appeared to be making great strides, and in particular, inertial confinement fusion (ICF) appeared to be adaptable as a rocket engine.

ICF uses small pellets of fusion fuel, typically lithium deuteride (6Li2H), with a small deuterium/tritium trigger at the center. The pellets are thrown into a reaction chamber where they are hit on all sides by lasers or another form of beamed energy. The heat generated by the beams explosively compresses the pellet, to the point where fusion takes place. The result is a hot plasma, and a very small "explosion" (compared to using a fission "bomb" to compress and heat the fusion fuel, as in a thermonuclear bomb).

For Daedalus, this process was run within a large electromagnet that formed the rocket engine. After the reaction, which was ignited by electron beams, the magnet funneled the hot gas to the rear for thrust. Some of the energy was diverted to run the ship's systems and engine. In order to make the system safe and energy efficient, Daedalus was to be powered by Helium-3 fuel that would be mined from the atmosphere of Jupiter.

Currently, designing an ICF system efficient enough for a Daedalus design remains considerably beyond our technical capabilities. Some designs, however, are on the drawing board awaiting confirmation. 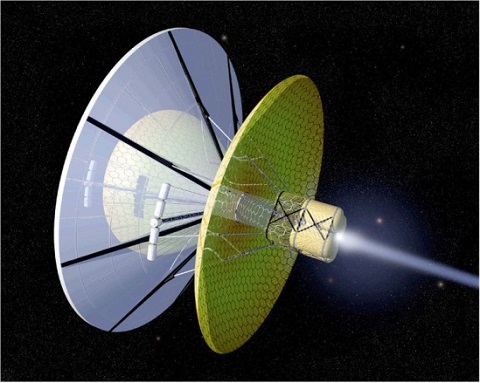 The noted physicist Robert W. Bussard in 1960 proposed a fascinating method of space propulsion capable of advanced interstellar spaceflight. This variant of a fusion rocket uses enormous electromagnetic fields as a "scoop" to collect and compress hydrogen from interstellar space. High speeds force the reactive mass into a progressively constricted magnetic field, compressing it until thermonuclear fusion occurs. The magnetic field then directs the energy as rocket exhaust, thereby accelerating the vessel.

In deep space, there is only one hydrogen atom for every 10 cubic centimeters of space. This means that the frontal scoop would need to be hundreds of kilometers across to scoop enough hydrogen atoms to funnel through to the reactor. Also, at ship speeds close to the speed of light, these atoms are traveling at the same relativistic speeds; the resulting cosmic rays would effectively fry the ship's passengers. To counter this, Bussard proposed ionizing these atoms at a safe distance using a laser beam, and using a powerful magnetic field to funnel the ionized atoms into the ship, bypassing the ship's hull.

There is an amazing characteristic of such a ship, assuming the highly advanced engineering and construction can someday be accomplished and the proposed fusion drive can be brought into existence. Let's assume a constant acceleration of 1g during the first half of the ship's journey, whereupon the ship decelerates to its destination at the same 1g for the comfort of all aboard. The resulting velocity of the ship for most of the journey would be very close to the speed of light. This would mean that the relativistic effects of time dilation come into play for the passengers.

For such a hypothetical voyage, Barnard's Star-six light-years away-could be reached in a little under eight years, ship time. For longer voyages, even the center of our Milky Way galaxy could be reached in just 21 years. As Sagan said,  traveling fast into space means traveling fast into the future-because those left behind on earth during such a hypothetical journey would perceive things very much differently. For them, millions of years would have passed.  Relativistic travels make distant interstellar space travel feasible-but only for those on board the voyage.

In subsequent installments in this series, the history, science, and technology of these and other space nuclear propulsion projects will be explored in depth. Stay tuned.

Stan Tackett holds undergraduate degrees in mathematics and computer science, and is currently pursuing a Master's degree in computer science with specializations in uses of artificial intelligence in the nuclear industry. His interests in nuclear engineering include nuclear propulsion for space travel, fusion, computational fluid dynamics and reactor physics. In his spare time he reads Piers Anthony as much as possible, and enjoys writing and editing crossover science fiction stories.

A quick note of congratulations to NASA's Mars Curiosity rover project team on the first anniversary of a daredevil landing on Mars on August 6, 2012....