Be Here Now and The Debate

For many years, I practiced yoga and Aikido, both of which included considerations of full-attention and the ancient Buddhist practice of mindfulness. A spiritually enlightened person is mindful. She pays attention to what she is actually doing and to the reality of her life and actions. Such a person does not live in a world of daydreams or overly-complex thought processes. She does not live in the past or in the future. The enlightened person is "here now."

I tried (and still try) to live up to this practice. In my opinion, "be here now" is good advice for anyone, of any philosophy or religion.

Now. On to my description of a recent debate.

On April 24, Richard Schmidt and I debated two anti-nuclear activists on radio station WHMP in Northampton, Mass. The subject was Vermont Yankee: Power Struggle. The activists were Michael Daley and Jeff Napolitano.

Daley is an anti-nuclear activist and author who lives in a 100-watt house, not connected to the electric grid. He also wrote a book about nuclear power.

Napolitano is a non-violence trainer with the American Friends Service Committee and Sage Alliance.

The debate was two hours long, and you can hear it on the web. Or you can download the mp 3. There's also a photo album (photos on this post courtesy of WHMP). 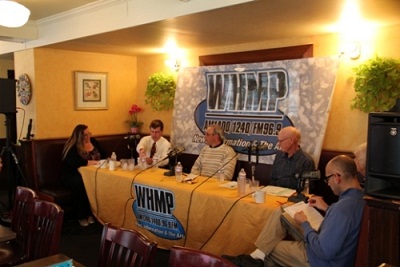 This was a long debate, a bit of a marathon, so instead of recapping it, I will start by discussing how Richard Schmidt and I felt about it afterward. Schmidt said that he had been frustrated by the way the debate had gone. During the debate, he wanted to talk about the best ways to make electricity. However, the opponents managed to lead the conversation to fear, hypothetical situations, politics, lies, fear, testimony at hearings, more fear, more hypothetical situations. In other words, they preferred gossip about the past and endless 'what-ifs' about the future.

I agreed with him.

One exchange at the debate was particularly telling (I am paraphrasing here.) Schmidt had talked about his home solar installations, and how solar was fine but wouldn't be enough for society's needs. I had explained that we don't have renewable capability to replace nuclear. Closing a nuclear plant would see it being replaced by fossil fuels, not renewables. Schmidt said that at the utility he formerly worked for, when the nuclear plant went off-line for refueling, a coal plant was started up.

At that point, we were almost shouted down by one of the opponents. He insisted that we have so many choices for electricity. He insisted it is not a choice between coal and nuclear. We don't have to start up a coal plant when we shut down a nuke! Richard said quietly but effectively: "In the world I live in, we do." 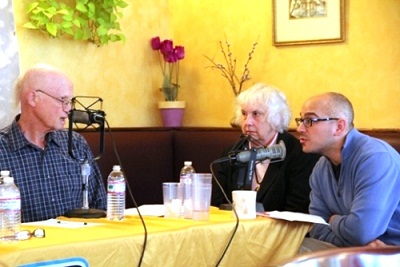 The past and the future

Soon, the opponents switched the conversation from the past to the future. They described the cancers that will happen because of Fukushima, further collapses expected at Fukushima if there is another earthquake, strontium-90 as a cause of breast cancer, and so forth. We answered these allegations one at a time, but they always brought forth another one.

In other words, their words emphasized fear, fear, and more fear. Things that had been badly done in the past. Things that haven't happened yet but "could" happen. Replacing nuclear with renewables. Stop talking about coal plants...we don't want coal OR nuclear. Those aren't the choices we have.

Be here now, for the opponents

Compared to many debates I have participated in, this one was friendly. The two opponents were nice people, and I think they were impressed with Schmidt's conservation activities. Schmidt represents his town on the Connecticut River Joint Commissions, and he founded the Mattabessett River Watershed Association. Schmidt also has more solar panels on his house than Michael Daley has-Daley is the opponent with the 100-watt solar home.

Still, Schmidt's after-debate assessment was completely correct. The opponents didn't want to discuss today's actual electricity choices. They seem to live in an alternate reality where shutting down a nuclear plant means starting up a wind turbine, not a fossil plant. They cannot accept the "be here now" real choices that Richard and I described.

Be here now, for me

What did I learn about reality, from this debate? Two things.

First, that nuclear has supporters. The debate took place in a restaurant, and fewer than a dozen people came to watch it. (It was also on the air, and is now on the web.) Three of the people who came to the restaurant were nuclear supporters! They had heard about the debate on the radio, and decided to attend. One man took his son out of school for the day to get "both sides of the picture." His son is working on a school project about nuclear energy.

It made me realize, once again, how few forums there are for people to hear nuclear advocates. For me, that is an important part of reality, and something I am trying to change.

Second, I learned about nuclear opponents. As I said above, much of the debate was quite friendly. However, the opponents have dedicated their lives to shutting down nuclear plants. They refuse to acknowledge that shutting down nuclear plants means encouraging fossil plants. By over-emphasizing their personal friendliness, I may also be living in the world-as-I-want-it-to-be instead of the world as it is.

To be here now, I have to accept reality also about nuclear supporters and nuclear opponents. It's hard.