Back to the Vermont Public Service Board: Square One - or Before!

The Vermont Yankee nuclear power plant received a 20-year extension of its operating license from the Nuclear Regulatory Commission on March 21, 2011. Vermont Yankee also is required to be issued a renewed Certificate of Public Good (CPG) from Vermont's Public Service Board to continue operating.

The Vermont legislature, however, has passed a law stating that the board could release its findings only if the Senate passed a resolution allowing release. In 2010, the Senate voted against the board releasing its findings. Soon after receiving the NRC license extension i9n March 2011, Entergy, the owner and operator of Vermont Yankee, sued the State of Vermont in federal court over the state legislature's blocking of Vermont Yankee's operation through refusing to allow the board to release its findings. In January 2012, the court ruled in Entergy's favor, and issued three injunctions barring the shutdown of the plant. The court found that the state was attempting to regulate nuclear safety issues, which is reserved for the federal government by law. The decision also stated that the Public Service Board retains its authority to regulate the plant in non-safety areas.

Since the Public Service Board retains some authority, the docket for the Certificate of Public Good was resumed. On March 9, the Public Service Board held a prehearing conference. The board sent out a list of questions to the parties to the docket, and the parties were asked to file responses. The conference was to address all the legal and procedural issues, so that the board could proceed with the hearing on the docket.

The conference was moved from the board's own hearing room to a larger hearing room across the street in the State House. The State House was practically empty because the legislators go home for the week when it is town meeting day. The hearing room was packed with the board, lawyers and representatives, and media and the public (anti- and pro-nukes). There was a long table in front of the board for the parties to the docket, but they spilled over into the audience. Meredith Angwin and I arrived 45 minutes early to be sure that we got seats! 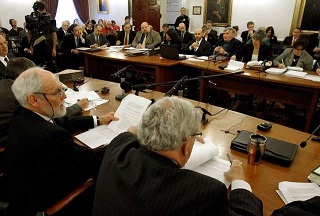 In reviewing the media coverage and my notes of the meeting, the best description of what the meeting revealed is a "legal thicket" built by the legislature and the board over the years. One side is trying to find a way through; the other is looking for "chinks in the armor to run in a sword." Isn't this what lawyers do? The Public Service Board started by asking the questions that it sent out. As revealed in the discussion, there were two things in the "thicket" that had been overlooked.

The first and most immediate question was, "Can Vermont Yankee operate after March 21?" This is the date that the CPG expires (it is the same date that the original NRC license expired). Entergy said yes, because there is a provision in the law that if a CPG application for extension is in progress when the original CPG expires, operation may continue under the old certificate. The opposing parties in the proceedings said no, and pointed to other laws and board orders. Entergy asked for assurances from the board on continued operation, and the board asked, "Why haven't you applied to us for what you want?" The reply was we're doing that now, and the board said that it should be formalized. Entergy said that it would comply.

The second question was, "How do we proceed in regard to the federal court ruling?" Do we scrub the hearing record produced so far, to remove anything that has been struck down by the federal court? Or do we start over? One board member asked what would be the fastest overall option. It wasn't clear, but it seemed that scrubbing the record might be better. Or it might be worse. As the board member said: Scrubbing would be less work for the board at first, but if it wasn't done right, there would be the possibility of a lot of time in court. This could lead to a longer time to completion.

The third question concerned storage of spent (used) nuclear fuel. State laws and CPG provisions allow storage only of spent fuel generated up until the end of the original CPG on March 21, 2012. The board did recognize that there won't be any more spent fuel to store until the next refueling outage. The plant has some used fuel in dry casks, on a pad built to hold all the fuel from 40 years of operation, so that decommissioning could remove the reactor building and the fuel pool. Nevertheless, the board asked several times in several ways, "By what authority would you store more spent fuel after March 21?" The board also asked what authority they have to approve the storage of additional fuel. State law addresses storage of spent fuel up to the end of the current CPG, and the board stated it has only the authority given to it by the legislature.

A board member asked, "What about the open docket on the tritium leak?" During the tritium leak that was discovered at Vermont Yankee in January 2010, the board opened a separate docket (which has not yet been closed) to investigate the leak. There was a question about "who has the ball" on this issue. The board thought that Entergy does, but an International Brotherhood of Electrical Workers (IBEW) union representative at the conference pointed out that the IBEW had asked the board for a schedule for the next hearing on the tritium leak docket and been turned down. There was no direct response from anyone at the conference, but Entergy said that it had been waiting for the NRC license to be resolved before acting to resolve the tritium leak docket schedule.

A second stumbling block is a reported provision in a board order that the plant may operate beyond March 21, 2012, only for decommissioning. This was gleefully brought up by an opposition lawyer.

Meredith Angwin's article at the "Yes Vermont Yankee" blog, written after we returned from the meeting, gives a good idea of the "tone" of the prehearing conference. To put things into perspective, however, the Public Service Board has been dealing with Vermont Yankee issues almost continually for about 12 years. The issues include the sale of the facility in 2002, a power uprate, dry cask storage, the ill-fated ENEXUS spin-off proposal, the tritium leak, and license renewal. The board may possibly be tiring of having to settle an issue that is fallout from the political arena. The fallout is as follows:  Congress decided that the United States should have nuclear power and have it safely. Congress appointed regulators to ensure this. Some citizens don't want nuclear power and have been unable to change the policy of Congress. These citizens have been using all the rights and powers given them by law, to try to derail the regulatory process, on the national and state level.

The parties must file responses with the board by March 15. The board will respond by March 20. On March 17, the American Nuclear Society's Vermont Pilot Project and the Energy Education Project of the Ethan Allen Institute are sponsoring another rally outside the Vermont Yankee plant gates, to show support for the plant and its people. Naturally, the opponents have also planned many events, including non-violent civil disobedience with likely arrests.

The next two weeks will be interesting.

Some recent news coverage of the Public Service Board prehearing conference and associated Vermont Yankee developments:

Brattleboro Reformer: "VY Future Could Be Determined by One Line in PSB Memo"  March 10, 2012