Headlines For You
Latest Feature
Can plant closures be an industry engagement opportunity?

The American Nuclear Society Special Committee on Fukushima has been conducting a comprehensive study of the events at the Fukushima Daiichi nuclear power plant following the Great East Japan earthquake of 2011. The special committee was tasked with providing a clear and concise explanation of what happened during the Fukushima Daiichi accident, and offer recommendations based on lessons learned. A report from the special committee will be released at a press conference on Thursday, March 8, at 10AM EST. The press conference will be webcast at http://www.visualwebcaster.com/event.asp?id=85244, and the report will be available for download at http://fukushima.ans.org/.

The report will include a detailed analysis and assessment of radiological health effects resulting from the accident. 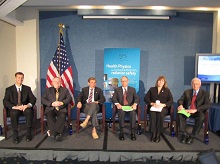 What have been the basic findings, so far, of the HPS radiation experts? As paraphrased in the New York Times article: "Health impacts from the radioactive materials released in the Fukushima Daiichi meltdowns will probably be too small to be easily measured... And the area cordoned off by the Japanese government as uninhabitable is probably far too large."

Radiation monitoring continues in Japan, and long-term studies are underway.

Atomic fission can provide all the world’s people with as much emission-free electricity as they need for prosperity, but the cost of nuclear energy has risen due to excessive regulations...